To bring the message to Westminster.

This was my best pic of the event.  I told them that one day such pics will be on the front page of the Times. 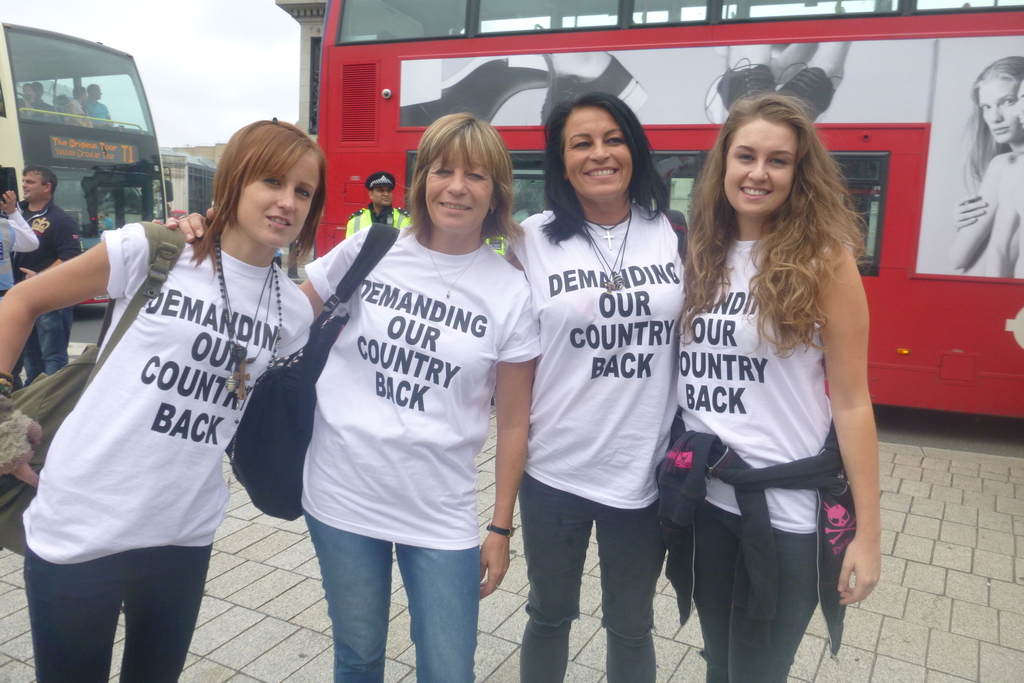 Downing Street......
plan to meet at the King Charles 1st monument (A large pedestrian roundabout area), this area is opposite Trafalgar Square (The start of Whitehall) start forming up at the monument from about 1315-13-30 with the wish to move off from that location at 1400. From there will be a procession along Whitehall for a static rally with speeches in Richmond Terrace ( Opposite Downing Street ) from 1430-1600....people coming by coach will have to park along side the embankment and people by train go to charing cross come out turn left and you can't miss it,we will have stewards there to direct you aswell...thank you all for coming and let's have a loud peacefull demo

In our Rotherham demo last Saturday, we highlighted two local issues:
• The abuse of English girls by Muslim sexual grooming gangs
• The further abuse of these English girls by the police, Borough Councillors, other officials and the Muslim community who conspired to let them suffer and, in many cases, increased their suffering.
Across England and across the world, the name Rotherham is now infamous.

But we know the Rotherham saga has been going on across the country. The Rotherham report listed 24 other abuse centres and says: ‘this abuse continues to this day.’ Our members know there are more centres.

***We are going to Downing Street to demand speedy and real action on ALL Muslim grooming, nationwide.

***We are going to Downing Street straight after Rotherham to punch home our messages from Rotherham, urgently, on the national stage.

We know there are Muslims from England involved with ISIS and their beheadings, the slaughter of thousands and the terrorising of thousands more. And we know that some 250 of those fighters have returned to the UK. We heard the prime minister on Sunday 14 September:

--ISIS have planned and continue to plan attacks in our country

--the government is determined to drain this poison from our society

***We are going to Downing Street to demand a ban on the return of British jihadis and real, urgent action to respond to the emergency he describes.

There is another poison in our society, the poison of political correctness. The defining characteristic of the grooming gangs is that they are Muslim. Some may find it distasteful to mouth this truth, but the EDL will mouth it, shout it, sing it and chant it till plain-speaking returns to everyday language.

***We are going to Downing Street to demand an end to the gutless refusal of the government to name Islam as the core problem behind grooming gangs.

This brings us to our fifth and sixth reasons:

***We are going to Downing Street to demand the government take firm action urgently about the many Islamic threats to this country, its people, its culture, its heritage and its future.

***We are going to Downing Street to make an EDL spectacle big enough and clear enough to echo through the media and into the hearts and minds and conversations of millions of people in this country.

We are making history.