And So It Begins, Battle of Badr 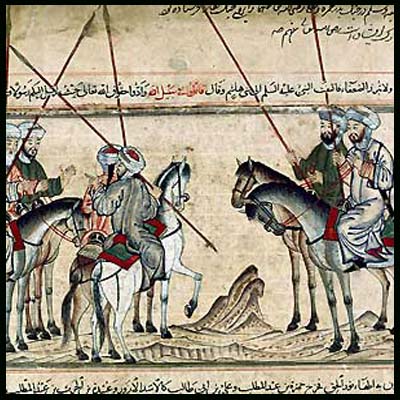 The Battle of Badr fought Saturday, 13 March 624 AD (17 Ramadan, 2 AH in the Islamic calendar) in the Hejaz region of western Arabia (present-day Saudi Arabia), was a key battle in the early days of Islam and a turning point in Muhammad's struggle with his opponents among the Quraish[ in Mecca.

The battle has been passed down in Islamic history as a decisive victory attributable to divine intervention, or by secular sources to the strategic genius of Muhammad. It is one of the few battles specifically mentioned in the Quran. Most contemporary knowledge of the battle at Badr comes from traditional Islamic accounts, both hadiths and biographies of Muhammad, recorded in written form some time after the battle. Advancing to a strong defensive position, Muhammad's well-disciplined men managed to shatter the Meccan lines, killing several important Quraishi leaders including Muhammad's chief antagonist, 'Amr ibn Hishām. For the early Muslims, the battle was extremely significant because it was the first sign that they might eventually defeat their enemies in Mecca. Mecca at that time was one of the richest and most powerful pagan cities in Arabia, which fielded an army three times larger than that of the Muslims. The Muslim victory also signaled other tribes that a new power had arisen in Arabia and strengthened Muhammad’s authority as leader of the often fractious community in Medina. Local Arab tribes began to convert to Islam and ally themselves with the Muslims of Medina; thus, the expansion of Islam began.

After the battle Muhammad decided to return to Medina. While Muhammad was returning to Medina, he reportedly received a revelation regarding the distribution of war booty.
According to Muslim scholar "Saifur Rahman al Mubarakpuri", a Quran verse was revealed ordering the execution of one of the captives, Nadr bin Harith. After this revelation, Nadr bin Harith was subsequently beheaded by Ali. Later the command to kill Uqba bin Abu Muayt was given, and he was subsequently beheaded by Asim Bin Thabit Ansari (some sources say Ali beheaded him)

"Badr" has become popular among Muslim armies and paramilitary organizations. "Operation Badr" was used to describe Egypt's offensive in the 1973 Yom Kippur War as well as Pakistan's actions in the 1999 Kargil War.

Iranian offensive operations against Iraq in the late 1980s were also named after Badr. During the 2011 Libyan civil war, the rebel leadership stated that they selected the date of the assault on Tripoli to be the 20th of Ramadan, marking the anniversary of the Battle of Badr.