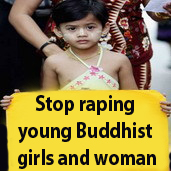 Sittwe: The villagers of Daungpraukkay Village in Sittwe Township in Arakan State have lodged a written complaint to the Chief Minister on 2nd of May, as the local authorities have taken no action against an offender who attempted to rape a minor girl from their village.

“It has been nearly a month since the crime, but the local police have not taken any action against him yet and we have reported the case in a written letter to the CM. We have written about the situation in our villages in the letter as well”, said a villager.

The offender is identified as 19 year old Sauribya, a Muslim youth and son of U Sudin, from Ngaprungree Village in the area. He allegedly attempted to rape a 12 year old girl from Daungpraukkay Village around 6 pm on 12th of April on her way back home together with two other children after buying some sugar from a shop in his village.

“He [offender] ran away when we rushed to the spot after hearing the children screaming. But he left the girl in torn clothes and with bruises on her body. She was very frightened and we felt a lot of sympathy for her”, said the villager.

There are only 18 households in Daungpraukkay Village and there is no shop or market in the village. The villagers have to shop for their groceries from the nearby Ngaprungree Village which holds 400 households.

When Narinjara contacted the No. 1 Police Station in Sittwe, a police officer on duty said, “The case has already been filed in our station, but I have no authority to speak on the case. There are investigators for the case and they know about the case.”

When asked for the contact phone number of the investigators, the police cut the phone connection telling us that they have no phone.

“The police are still looking for him but have not found him yet. They have also done investigations of his parents and neighbors in the village. The villagers here are saying that he has already fled to Bangladesh”, said an elder from the area.

The villager said they have also mentioned the former crimes committed by gangs of Muslims from Ngaprungree Village on the nearby villagers, which include the killing of a pregnant woman after being gang-raped.