The Islamic Destruction of Timbuktu (Mali, 2012) 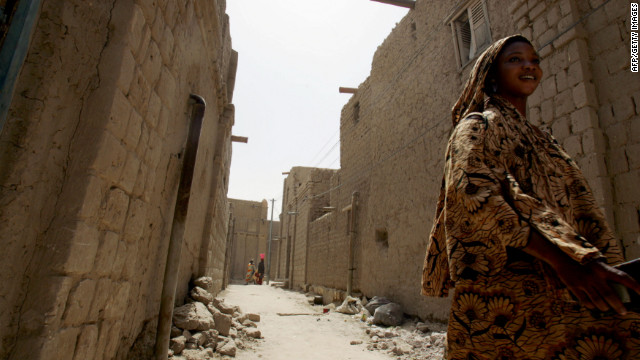 The ancient city of Timbuktu fell to Islamist rebels after the coup in Mali.

The attacks Friday were blamed on Ansar Dine, a militant group that seeks to impose strict Sharia law.

The ancient city in Mali was captured by at least two separatist Tuareg rebel groups -- one of which is Ansar Dine -- in an anti-government uprising in the northern part of the country that began in January.

The rebels burned the tomb of a Sufi saint where people come to pray, said Sankoum Sissoko, a tour guide familiar with the place. He said the library and other heritage sites remained under threat.

Baba Haidara, a member of the National Assembly, called for UNESCO and the greater international community's help restoring the shrine and freeing the city.

The general Islamic term for the period of history before the advent of Islam, as well as the pre-Islamic period of any nation’s history, is jahiliyya, or the period of ignorance and barbarism. Consequently, any art, literature, or architecture that any non-Islamic culture produces has no value whatsoever: it is all simply a manifestation of that ignorance and barbarism. The celebrated writer V. S. Naipaul encountered this attitude in his travels through the Islamic world. For Muslims, he observed, “The time before Islam is a time of blackness: that is part of Muslim theology. History has to serve theology.”

Naipaul explained how some Pakistani Muslims, far from valuing the nation’s renowned archaeological site at Mohenjo Daro, see it as a teaching opportunity for Islam:

In other words, Mohenjo Daro has no value for what it reveals about an ancient civilization. Its value is solely in its present condition as a ruin, a sign for the unbelievers of Allah’s wrath. Likewise in Iran. Naipaul notes: “In 637 A.D., just five years after the death of the Prophet, the Arabs began to overrun Persia, and all Persia’s great past, the past before Islam, was declared a time of blackness.”

We have also seen the fruit of this assumption in our own times in Cyprus, where Muslims attempted to use the fourth century monastery of San Makar as a hotel, and in Libya, where Qaddafi turned Tripoli’s Catholic cathedral into a mosque. And the most notorious recent example, of course, was the Taliban’s dynamiting of the Buddhas of Bamiyan in 2001. And even though these shrines in Timbuktu are Islamic, the Ansar Dine considers them idolatrous, as per Muhammad's words:

"'A'isha and Abdullah reported: As the Messenger of Allah (may peace be upon him) was about to breathe his last, he drew his sheet upon his face and when he felt uneasy, he uncovered his face and said in that very state: Let there be curse upon the Jews and the Christians that they have taken the graves of their apostles as places of worship. He in fact warned (his men) against what they (the Jews and the Christians) did." -- Sahih Muslim 1082

"Narrated 'Aisha: Allah's Apostle in his fatal illness said, 'Allah cursed the Jews and the Christians, for they built the places of worship at the graves of their prophets.' And if that had not been the case, then the Prophet's grave would have been made prominent before the people. So (the Prophet ) was afraid, or the people were afraid that his grave might be taken as a place for worship." -- Sahih Bukhari 2.23.472

It was a singular, defining act of barbarism, beamed out live for the world to see. In March 2001, Taliban fighters and grandees clustered around the famed giant statues of the Buddha in Afghanistan’s Bamiyan province, laid explosives at their feet and blew them up. The extremists’ shadowy leader, Mullah Mohammed Omar, lauded the destruction of the two towering 6th century monuments: “Muslims should be proud of smashing idols. It has given praise to God that we have destroyed them.”

Similar language and zeal was on air Monday when news emerged of an Islamist faction in Mali desecrating a number of tombs in the ancient city of Timbuktu, which in recent months fell under control of a separatist insurgency. “The destruction is a divine order,” said a spokesman from Ansar Dine, a radical outfit with alleged links to al-Qaeda. According to reports, the militants have set about tearing down centuries-old mausoleums of Muslim holy men in Timbuktu, a Saharan crossroads known in lore as “the city of 333 saints” and long a fabled destination for backpacking tourists. UNESCO, the U.N.’s cultural agency, says as many as half of the city’s shrines “have been destroyed in a display of fanaticism.”

In the puritanical strain of Islam adhered to by Ansar Dine (and the Taliban), veneration of Sufi saints counts as idolatry, a heretical practice that cannot be tolerated. Militants bearing guns, pickaxes and shovels reduced to rubble the tomb of Sidi Mahmoud, who died in 955 A.D. They have also knocked down tombs of two other prominent medieval saints, Sidi Moctar and Alpha Moya. One Ansar Dine spokesman told the BBC that they plan to destroy every single Sufi shrine in the city, “without exception.”...

Islam’s core tenet is the recognition and worship of one supreme God, which it shares with the other Abrahamic religions. Islam espouses the direct link between a believer and the God and rejects the intercession or the existence of a medium between the two. Although this position can be considerably more complex within the different schools and strains of Islamic theology, the conservative orthodoxy of Wahhabism adheres strictly and literally to this position and prefers to abide by a more narrow and safeguarded interpretation.

The widespread demolition of gravesites, tombs, mausoleums, birthplaces, mosques or locations otherwise connected with the prophet Muhammad, his family and companions, pious individuals or important events in Islamic history after the Saudi conquest of the Hejaz was an attempt to eradicate non-orthodox practices that had become established in regional Islam during that time. The ongoing demolition of similar places until the present day may constitute the continued effort by Saudi authorities to safeguard Islamic monotheism against non-orthodox practices that are not recognized by Islam.

Controversy arises because, like any theological issues, there are wide differences in opinion concerning orthodoxy, and with what constitutes acceptable Islamic practices and what does not. This is further compounded by the countless interpretations of Islamic theology that can be present in places such as Mecca and Medina, where millions of Muslim visitors from diverse regions and backgrounds of the Islamic World can congregate in the same space at any given time.

What is certain is that Islam prohibits the deification of anything other than God and this includes the attributing of divine characteristics (such as all-encompassing power or the control or knowledge of human destiny) to anyone or thing other than god, including prophets and saints. Furthermore, there exist within the accredited traditions of Muhammad (Sunnah) several injunctions prohibiting the visitation of sites and more specifically the erecting of structures over graves such as mausoleums and Mosques. It is according to these specific orders from the Prophetic authority of Muhammad that Wahhabi and other orthodox Muslims devise the rulings that permit the demolition referenced above.

More destruction in Mali. It maybe that before the UN move in and remove the Islamist's they'll finnish the task of  destroying all the mausoleums.

Now the islamist's are in charge in Egypt, i wonder what their attitude to ancient historical sites that tower above anything Islam has achieved will be.

The director of Mali's Timbuktu tourism office, Sane Chirfi, said that Ansar Dine rebels linked to al-Qaida in the Islamic Maghreb tore down the mausoleums, which were historic but not included on the United Nations list of World Heritage sites. The mausoleums housed the remains of Muslim scholars and teachers who are revered by the Timbuktu population.

Since taking control of Timbuktu earlier this year, the Islamists have destroyed seven of the 16 mausoleums listed as world heritage sites. Some date back to the 14th century.

According to many residents, the destruction of the graves is the rebels' reaction to the recent U.N. resolution calling for an international military intervention to remove the Islamists from northern Mali.