We need to remember the past in order to build a future.

It has long been fashionable to disparage the notion that one can derive historical insight from medieval poems; an exception to this tendency can be found in the Castilian martial epic Poema del mio Cid, which displays a surprising fidelity to the documented facts of its hero’s life.   Rodrigo Diaz de Vivar, known to history by his Arabic moniker al-Sayyid (“the lord” or “El Cid”), was an extraordinary eleventh-century warrior who served both Islamic and Christian lords towards the end of a peculiarly chaotic period in Iberian history, and died in 1099.

The famous vernacular poem that tells his story was written about a century after his death, and therefore presents us with more than one layer of historical insight: on the one hand, it is imbued with early thirteenth-century martial values, crusading ideals which, although alien to Rodrigo’s own period, dominated the culture of the Spanish Christian nobility in the most crucial phase of the Reconquista, which culminated in the great victory at Las Navas de Tolosa in 1212.  On the other hand, however, the poem also lauds its protagonist for displaying a particular set of virtues throughout his colorful and violent career; these virtues, although somewhat more opaque to a modern audience than the anti-Moorish crusading sentiment, constitute the real reason why the historic figure of Rodrigo Diaz was considered suitable material for enshrinement as a medieval literary hero.  The virtues in question are those governing lordship and vassalage, which the literary Rodrigo displays perfectly; unlike the anachronistic crusading spirit of the poem, these qualities would have been just as much at home in the eleventh century as in the thirteenth.

The Iberian peninsula in the age of Rodrigo Diaz (1043-1099) was a world of small and relatively weak kingdoms, both Islamic and Christian, in which violent conflicts between coreligionists were just as common as wars pitting Christian and Muslim rulers against one another; in such an environment, interfaith alliances between embattled warlords were normal rather than exceptional.  This unique period in Iberian history was inaugurated by the collapse of the once-mighty Umayyad caliphate of Cordoba in 1031.  The Umayyad family, driven from their caliphal throne in Damascus by the Abbasid revolution of 750, had taken refuge in Spain, uniting the vast majority of the peninsula under their sway until eleventh-century civil conflict tore their caliphate to pieces.  The Christian kings of the north, although nominally independent, had been accustomed to pay tribute to the government in Cordoba; after 1031, however, the tables were turned, as the mighty and monolithic Umayyad state was replaced by a gaggle of squabbling emirates known to history as taifas.

In the era of the taifa kingdoms, the Christian monarchs of the north made a modicum of headway, raiding, conquering, and exacting tribute from their southern neighbors.  As one can imagine, however, the richness of the spoils also created conflicts among the resurgent Iberian Christians; these conflicts, in turn, presented opportunities for crafty Islamic emirs to play different factions off of one another.  Rodrigo Diaz flourished in this chaotic world due in no small part to his raw martial prowess; as an infanzon, or petty nobleman, he served the king of Castile, Sancho II, until Sancho’s untimely and suspicious death in 1072.  This event added Castile to the possessions of Sancho’s ambitious brother and nemesis, Alfonso VI king of Leon; needless to say, Alfonso’s relationship with his late brother’s chief warrior and battlefield champion was awkward in the best of times.  Alfonso VI was the dominant figure in the Iberian world by 1072; Christian and Islamic kings awarded him a varying mixture of fear, honor, and tribute.  Hence, it is perhaps not surprising that he felt confident in doing without the services of the mighty Cid; Alfonso sent him into exile on two distinct occasions, during which many of Rodrigo’s legendary exploits took place.

Rodrigo spent his first exile (1081-1087) in the service of the Islamic emir of Zaragoza, winning spectacular victories against his new lord’s enemies, including the emir of Lerida and the infamous Christian count of Barcelona, Berenguer Ramon the Fratricide.  By the end of the Cid’s first exile, however, it was clear that the politically fragmented world of the taifa kingdoms was coming to an end; the mighty Almoravid empire, headquartered in the North African city of Marrakesh, had launched an invasion of the Iberian peninsula in 1086, gobbling up many of the defenseless Islamic taifas and defeating King Alfonso himself at the cataclysmic battle of Sagrajas (az-Zallaqah).  The Cid, recalled to service for a brief time in the aftermath of the catastrophe, was exiled again in 1089; after this exile came to a nominal end in 1092, the Cid spent his last years capturing Valencia and then defending it from an Almoravid host in 1094.  His conquest of Valencia resulted in the re-foundation of the Christian bishopric there.  Hence, although his final exploits certainly involved the extension of Christian civilization at the expense of Islam, it is more accurate to see the historic Rodrigo as an unusually successful warlord than as a crusader.  Nevertheless, his conduct as a vassal to his lords and a lord to his vassals earned him enormous prestige during his lifetime, and the peculiarly medieval virtues that he displayed in the conduct of these relationships provide much of the fodder for his poetic apotheosis. 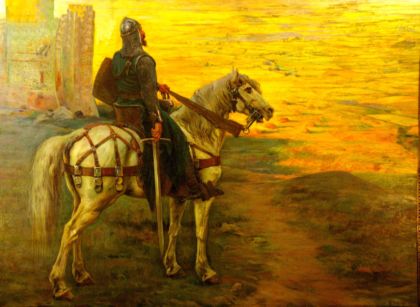 The theme of lordship and vassalage appears at the very beginning of the poem; as the Cid sets off into exile, the reader is presented with a vivid picture of his journey through the city of Burgos.  Accompanied by a band of loyal knights, the Cid receives no hospitality there due to King Alfonso’s edict, while the townsmen and their wives, powerless to help, cry out “Dios, qué buen vassalo, si oviesse buen señor!” (“O God, what a good vassal; if only he had a good lord!”).  The Cid is portrayed as a good vassal because of his blind loyalty to the ungrateful Alfonso, even in the face of exile and punishment.  He is also a good lord, however: he protects, provides for, and rewards his own vassals generously, attracting hundreds of noble followers even as a homeless exile.  The poem moralizes frequently on this point, noting that after the Cid and his men captured Alcocer, “how well he had rewarded his own vassals!  He had enriched them all, knights and foot soldiers—you could not have found one poor man among them.  Those who serve a good master are always well off!”  (Qué bien pagò a sus vasallos mismos! / A cavalleros e a peones fechos los ha rricos, / en todos los sos non fallariendes un mesquino; / qui a buen señor sirve siempre bien en delicio).

In conclusion, it should be noted that for medieval warriors, chivalry was much more than a sterile ritual code or a body of literary conventions.  Chivalry imposed highly practical and clearly-understood obligations on the knightly warrior class; these were men capable of great violence but also grand acts of piety and generosity, whose personal relationships with one another held western society together.  Rodrigo Diaz de Vivar, not without reason known as al-Sayyid, epitomized the chivalric code in a manner similar to other historical figures that we find transformed into literary heroes; by doing so in his lifetime, he became an exemplar to knights of a much later generation, whose crusading valor would break the back of Islamic power in Spain.