Amazing: Rule of Law applied to Government Intimidation in Iran

Surprisingly in this case, the rule of law was applied to punish those who mistreated protesters.  The government was not able to get away with its normal bullying and intimidation.  It will be interesting to see how this pans out.Death penalty for Iran jail abuse 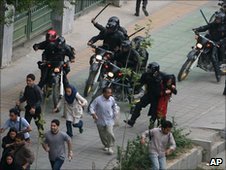 Hundreds of protesters were jailed for taking part in election protests

An Iranian military court has sentenced two men to death in connection with the killings of three anti-government protesters, the state news agency said.

Prosecutors said the three died after a series of beatings in Iran's Kahrizak jail, where they were held for taking part in last year's election protests.

Nine other officials were sentenced to jail and lashes over the deaths, Irna said quoting a court statement.

Kahrizak jail was shut in July over concerns about the abuse of inmates.

The officials charged in the Kahrizak case - whose names have not been released - were among 12 people facing prosecution over the inmates' deaths.

The pair were found guilty of "inflicting intentional abuse leading to the murder" of the three protesters, Irna quoted the court statement as saying.

They have 20 days to appeal against the rulings.

One person has been acquitted due to lack of evidence, Irna said.

President Mahmoud Ahmadinejad's re-election in the June 2009 poll triggered mass protests by opposition supporters, who claimed the vote was rigged.

More than 150 demonstrators were taken to Kahrizak detention centre, south of Tehran, in the aftermath of the street protests.

The three who died while in custody have been named as Amir Javadifar, Mohsen Ruholamini and Mohammed Kamrani.

Officials had initially said Mr Ruholamini and Mr Kamrani died of meningitis, but the coroner ruled that the cause of death was a series of beatings.

Iran has jailed several opposition figures and hundreds of protesters over their roles in poll-election unrest.

It has also hanged two activists it said were guilty of "war against god", a charge levelled at those who protested against the disputed election of Mr Ahmadinejad.