Catalunya is the centre of Jihad in Spain - and also the heart of the left - accident? 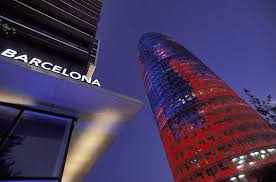 E. Martín de Pozuelo
La Vanguardia
John: I had not noticed the association of the Left with Islam until I was lucky enough to join 4freedom - It is strange how Facistism (National Socialism) is actually a thing of the left rather than the right and what good bedfellows the Nazis and the Islamistas were!!!
Until we can return Europe to the Right - our lives and our culture will remain in peril.
No Pasarán
Check out this Blog - http://ladecadenciaeuropea.blogspot.com/2007/05/catalunya-centro-de...

If anyone would like a translation of the Spanish articles - just let me know and I will do my best with my terrible spanish - for any native speakers I appologise.

Catalonia is the main center of development of the Jidahista terrorism of Spain and Europe, according to an investigation on radical Islamists jailed in the Spanish prisons carried out by the Department on Global Terrorism of the Real Institute Elcano, a foundation dedicated to international and strategic studies.

In this same sense the Spanish Confederation of Policía has expressed yesterday in Barcelona (CEP), this is an association that counts more than 2,600 police affiliates in Catalonia, when confirming that, in the last years, the Catalan territory has become the center of Islamic terrorists in greater of Europa for recruitment and induction" and to add that every month four or five resident Catalan Muslims move to Iraq, Chechenia and Afghanistan to train. Also, another study made by the Elcano Institute concluded that there is high risk of islamist attack in Spain due to these resident terrorists. A danger before which the security of the State has unfolded all measures of investigation and prevention, as happens, for example, in Ceuta and Melilla. Baltasar Garzon of the Newspaper “La Vanguardia” revealed that Al Quaeda are based in these two places, Ceuta and Melilla.

According to the mentioned information, a 31% - that is to say, one of each three of the jailed Islamic terrorists in Spain from the 2001 was stopped in Catalonia, where the same proportion of terrorists resided. " The study of the terrorists entered prison in Spain, more than 300 since the end of the Nineties, this sample shows that Catalonia is the epicenter of the Jidahista activity in our country (Spain) , Fernando Reinares who is an chief investigator and director for the Programa sobre Terrorismo Global, confirmed that was the case, main investigator and director of the Program on Global Terrorism of the Elcano foundation and adviser for subjects of antiterrorist policy of the minister of the Interior between the 2004 and the 2006. Reinares maintains that the analysis on the Muslim extremism locates the territory Catalan as the HQ area of Jidahistas and if the study had taken into account those on remand as well as those under sentence the percentages would have been much higher. He decided to exclude them as it is not certain that the detainees are terrorists until after a court has determined that they are.

Groups of Radical Islamistas attach themselves to groups of Muslims who work in agriculture all over Spain and through this contact recruit them to Jihad.

It has been noted that it is almost impossible to detect this process of recruitment as the Muslim Communities where integration appears to be good, however, these communities are susceptible to this kind of recruitment. That one would be the case of Salt, Islamic capital of Catalonia. In this respect, agents of the security of the State notice that to date Salt is becoming the center of attention of his investigators since they have detected the insertion of a small group disseminating this message radical islamists.

It is obvious to the investigators in Salt that the Islamistas are trying to take ideological control of the community, either recruiting or marginalizing the moderate Muslims. In any case, the investigations on the land demonstrate that Muslim communities give the appearance of integration but terrorist cells take advantage of that circumstance. In fact, agents of the antiterrorist fight emphasize that without the collaboration of the Muslim communities it is very difficult to stop the implantation of new terrorist cells. In this sense, sources of Interior describe of good the collaboration as the Islamic communities in Spain, that, bing said, they fear that Muslims are being given Spanish Citizenship without any distinction between radical or moderate Islam.

As far as the objectives of the Jihdahistas living in Spain and especially in Catalonia, the police investigators are not aware as they are primarily concerned only with suicidal combatants for the wars of Iraq and Afghanistan,

John: This article demonstrates that the Islamistas are using moderate Muslims as cover and are, through daily contact, recruiting a largely susceptible population onto the road of Jihad. So just because a community appears to be reasonably integrated they are still a threat. The few Muslims that we would call “moderate” are being disenfranchised by the Islamistas and then resort to informing the police to regain control of their communities.

The question we must ask ourselves is why Catalunya? This community of Spain is the most socialist and the most politically correct and like in the UK are playing with the voting patterns in order to stay in Power. The vast majority of upper working class and above Spanish people are quite conservative by nature and Zapatero knows this and expects a victory by the PP in the elections. By playing the same game as the Labor party and now the Lib Dems – they hope to use the Islamistas vote to steal victory from a just defeat. The fact that the Government are rushing though Citizenship for these killers and giving voting rights to non-eu nationals is surely Treason against Spain? Doesn’t that sound familiar?