Muslims like to say that Islam is superior to western religions, giving examples of how women are treated better under Islam, how Islam is in tune with nature.. Of course, this is all hypocrisy. Muslims feel they have already achieved a perfect state by merely being Muslims.

So lets see how much they are in tune with nature 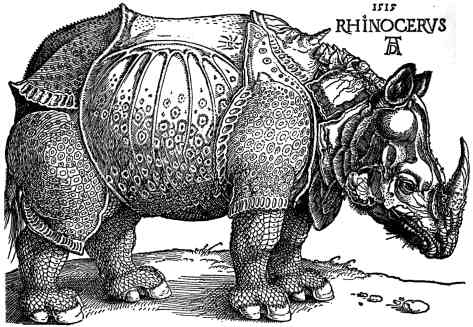 Take the northern white rhino. German artist Albrecht Dürer's famous 1515 woodcut of a rhinoceros covered in armor (above) may have helped perpetuate the myth that rhinos are war-like animals, and even functional as military animals. But the rhino does not mix well with battle. Their "thick" or "plated" skin is actually quite sensitive and the animals have poor eyesight, limiting their ability to run in any particular direction.

That incidentally has made it easy for war-time poachers to kill them the rare northern species of the rhino around its lone wild habitat, the Garamba National Park, also in Congo. Located near the border with war-torn Sudan, the park has in recent years received visits from AK-47-toting men -- enterprising members of the janjaweed militias -- who kill the rhino for their valuable horns. The horns are sought after in Asia for their medicinal value, and in the Middle East, where they are turned into dagger handles.

Although white rhinos are still abundant in South Africa, the northern white species (above) has not been seen in the wild since 2006. The Janjaweed militias however are still alive and kicking -- thanks in part to the guns and ammo they can buy with all of those animal parts.

"Earnings from the ivory trade is sustaining the Janjaweed," Michael Wamithi, former head of the Kenya Wildlife Service and now director of the elephant program for the International Fund for Animal Welfare, told Newsweek in March. "It's untraceable money," like the "blood diamonds" that bankrolled brutal wars in Sierra Leone.

Trafficking in rare animals has long been a high-stakes crime, and despite stronger efforts than ever, it's growing. Still, the connection between illegal profits from animal trafficking and terror is not one that's often been drawn. Until now.

According to India's security services, police, intelligence analysts, local traders and forestry officials, Islamic militants affiliated to al-Qaida are sponsoring poaching in the reserve for profit. These groups have established bases in the formerly moderate enclave of Bangladesh and have agents operating all along the country's porous 2,500-mile border with India. They have gone into business with local animal trappers and organised crime syndicates around Kaziranga - as well as in parks and reserves in Nepal, Burma and Thailand - in a quest for horns, ivory, pelts and other animal products with which to raise "under the wire" funds that they can move around the world invisibly.

A small rhino horn, the size of a bag of sugar, with good provenance (the beast's tail and ears, presented to a prospective buyer) and in the right marketplace (in Asia, Europe or North America), can fetch £20,000. Big cat pelts can go for up to £10,000. Monkey brains, bear bile, musk, big cat carcasses, elephant feet, tails, horns and teeth have considerable value. A shipment worth £2.8m was recently intercepted by UK customs. Profits from the trade run from $15bn to an incredible $25bn a year, according to estimates from the WWF (formerly the World Wide Fund for Nature). The punishment for trading in these items is generally a fine as low as £300 in India and £900 in Nepal. 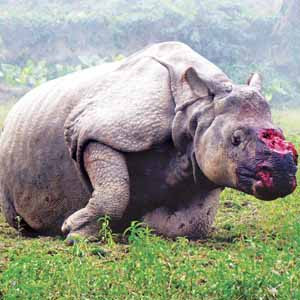 Somewhere in the long grass, which rises in clumps like a castle keep, are more Royal Bengal tigers per square kilometre than in any other stretch of jungle in the world - broken down into their constituent parts, each is worth as much as a bespoke Italian racing car. 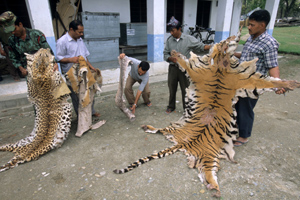 What do they poach? "Whatever we can and whatever we are asked for." The money is in rhino horn and elephant tusks, the latter taking advantage of a black hole in the forestry department's record-keeping. While the rhino population remains closely monitored, no accurate records are kept for elephants. The forestry department estimates that 170 were poached over a six-year period, but the sand bar people claim a figure almost double that. "This was a Chinese business but now it's Bangladesh's business. It's become God's work," he says, raising an eyebrow. "And, as you know, the Prophet, peace be upon his head, is irresistible."