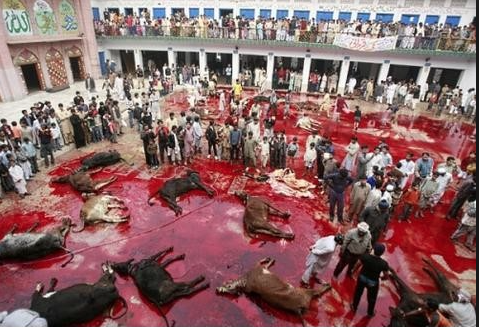 This is a procedure of slaughtering animals and meat preparation required by Islam for the consumption by Muslims.  To grant certification or label meat (and other food stuffs) ‘halal’ means that Muslims are ‘permitted to eat’ it.

There is a huge and profitable industry surrounding the halal process and certification.  This presents a threat and challenge to non-Muslims in society.

Otherwise known as ritual slaughter the process, as the Quran says, requires that the name of Allah be associated with this killing.  [Q 6 118-121; 5:4] Scholars also recommend that the person slaughtering the animal should ‘bless Mohammed.’  These two aspects requires that a Muslim is involved, thus making the process a matter of religion or ritual.

Sikhs are forbidden by their religion from eating meat killed in a ritualistic manner.  Christians also take seriously the many biblical injunctions against eating foods ‘offered to idols’.

Because of its ‘religious’ nature, the halal industry excludes non-Muslims.  This turns into a ‘job for the Muslim boys’ scheme.  Non-Muslims butchers and meat processors are driven out of the industry.

The animal must be fully conscious and bled to death in a way which allows the blood to drain from its body.  No major Islamic teaching permits the stunning of animals prior to slaughter.  Minimising animal suffering is what many in the UK want.  There are British laws against abusing animals and causing unnecessary pain, which halal ignores.  Vets tell us these animals often die painfully by choking on their own inhaled blood.

Much of the food placed on our market shelves is halal without us knowing.  The labelling of halal products (e.g. even bread and chocolates) is not required by law.  Consumers are told about the chemicals and calories in their food but are not always told about the halal meat and other foodstuffs in their trolley.  Power to the consumer!

Meat is not the only halal product

Cadbury, Nestle and Kraft have halal products. Even Colgate toothpaste and some bottled water and cosmetics are halal-certified. There is halal cat food made in Coventry! There is halal tourism and there are halal financial services.

The connection to Jihad

The halal certification process is not free.  The money paid to these Muslim organisations to provide the certificate is money funnelled into Muslim hands for Muslim purposes.  In the absence of evidence to the contrary we can assume that this money forms part of the obligatory alms called the zakat.  There are specific purposes for this money as spelled out in Quran 9:60.

Those purposes include the promotion of Islam and supporting those fighting ‘for Allah's cause (i.e. for Mujahidun - those fighting in the holy wars)’.

We say ‘NO!’ to anything to do with halal – the process, the certification, the payments, the secretive sale to the British public, the connection with jihad, etc.  However, as a first step we urge all people to demand of the Government the requirement to label what the public purchases and consumes.  But in the long-term remember: The Muslim zakat tax on your halal Sunday roast could be paying for a bullet that kills a British soldier.

A5 leaflet attached to this article for public use.