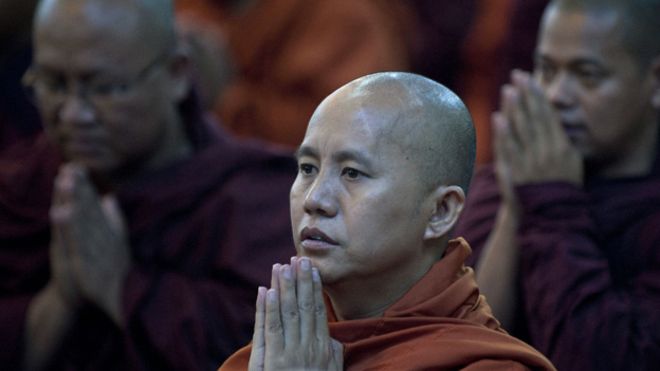 A recent New York Times article titled “Extremism Rises Among Myanmar’s Buddhists” offers important lessons on common sense and nonsense. Witten by one Thomas Fuller, it begins by telling of how

After a ritual prayer atoning for past sins, Ashin Wirathu, a Buddhist monk with a rock-star following in Myanmar, sat before an overflowing crowd of thousands of devotees and launched into a rant against what he called “the enemy”—the country’s Muslim minority.  “You can be full of kindness and love, but you cannot sleep next to a mad dog,” Ashin Wirathu said, referring to Muslims. “I call them troublemakers, because they are troublemakers.”

While the article is meant to highlight the supposed “intolerance” of Myanmar’s Buddhists, for those who can read between the lines—or who are familiar with Islamic teachings, history, and current events—it is clear that Buddhists are responding to existential threats posed by the Muslims living among and around them.

Here is the first lesson: unlike the West, Buddhist monks, despite their reputation as devotees of peace, are still able to accept and respond to reality; are still governed by common sense.  Unlike the West, whose sense of reality has been so thoroughly warped by a nonstop media propaganda campaign emanating from ubiquitous TVs and computer screens, conditioning Americans how to think and what to believe, “third world” Buddhist monks are acquainted with reality on the ground.  They know that, left unchecked, the Muslim minority living among them—which began hostilities—will grow more aggressive, a historically demonstrative fact.

As in other countries, the Muslims of Myanmar have engaged in violence, jihadi terror, and rape of Buddhist girls.  And that’s as a minority.  Myanmar’s Buddhists are also cognizant that, in neighboring nations like Bangladesh where Muslims are the majority, all non-Muslims are being ruthlessly persecuted into extinction.  But even in bordering Thailand, where Buddhists are the majority and Muslims a minority, in the south where Muslims make for large numbers, thousands of Buddhists—men, women, and children—have been slaughtered, beheaded, and raped, as separatist Muslims try to cleanse the region of all “infidel” presence. Click here for graphic reports and images of Muslim atrocities committed against Buddhists that may shed light on why Myanmar Buddhists are wary of Muslims.

Accordingly, Wirathu, the “radical” Buddhist monk is quoted in the NYT article as saying: “If we are weak, our land will become Muslim.” The theme song of his nationalist organization speaks of people who “live in our land, drink our water, and are ungrateful to us”—a reference to Muslims—and how “We [Buddhists] will build a fence with our bones if necessary” to keep supremacist Muslims out.  His pamphlets say “Myanmar is currently facing a most dangerous and fearful poison that is severe enough to eradicate all civilization.”  Another senior and apparently “radical” monk concurs: “The main thing is that our religion and our nationality don’t disappear.”

From here we come to lesson two: if Buddhists understand what is at stake—their entire civilization—the NYT report is a testimony to why the West still cannot face reality.  Fuller’s article carries all the trademarks—moral relativism and pro-Islam bias, and that dangerous mixture of confidence and ignorance—that characterize the mainstream West’s inability to acknowledge and respond to Islam, but rather to sprout sentimental, nonsensical platitudes.

For starters,  Fuller doesn’t seem to comprehend why Myanmar’s Buddhists are worried about disappearing , saying that “Buddhism would seem to have a secure place in Myanmar. Nine in 10 people are Buddhist… Estimates of the Muslim minority range from 4 percent to 8 percent of Myanmar’s roughly 55 million people while the rest are mostly Christian or Hindu.”

Indeed, in neighboring Thailand Muslims also make for about 4% but have, as mentioned, been engaging in genocide against Buddhists in the south where Muslims are concentrated.  Moreover, an acquaintance with history—real history, not the whitewashed versions currently peddled in American schools—proves that for 14 centuries, Islam has, in fact, wiped out entire peoples and identities: what we today nonchalantly refer to as the “Arab World” was neither Arab and almost entirely Christian in the 7th century, when Islam came into being and went on the jihad. Fuller also seems to miss the significance of the fact that there are more Christians and Hindus in Myanmar than Muslims—yet Buddhist hostility only extends to Muslims.  If indigenous Buddhists are simply becoming nationalistic radicals, as Fuller suggests, how come they are only attacking Muslims, not Christians and Hindus?

Then there is the clear bias.  While regularly decrying the Buddhist treatment of Muslims, including by giving several anecdotes, Fuller does not mention the jihadi terror and murder that Muslims have visited upon Buddhists.  He condemns Buddhists for reportedly displacing some 150,000 nonindigenous Muslims, without seeming to be aware that, all around the Islamic world, Muslims are displacing hundreds of thousands of non-Muslims, leading to a mass exodus of Christians.  If Fuller is unaware of the significance of this fact, Myanmar’s Buddhists are not—hence their very real concerns of being swallowed up by Islam if they don’t act now when they’re in the majority in their own homeland.

But these objective facts are apparently not relevant to the NYT’s readership, which has been more conditioned to subjective talk of “feelings” and other therapeutic nonsense.  And here Fuller certainly delivers: the entire tone of the article is one of disappointment at the Buddhists and how “many Muslims are worried.” His closing paragraph is of “a Muslim vendor in the city’s central market” who spoke “in a whisper” saying “I’m really frightened. We tell the children not to go outside unless absolutely necessary.”

Thus while Myanmar’s Buddhists fight for their right to survive against an ever encroaching Islam, the NYT does what it does best—distort reality to make it fit the mainstream media’s world of make believe, in this case, that Muslims are always innocent and misunderstood victims.

For thousands of years my country (Indonesia) was a Hindu Buddhist kingdom.  The last Hindu king was kind enough to give a tax exempt property for the first Muslim missionary to live and to preach his religion. Slowly the followers of the new religion were growing, and after they became so strong the kingdom was attacked, those who refused to become Muslims had to flee for their life to the neighboring island of Bali or to a high mountain of Tengger, where they have been able to keep their religion until now. Slowly from the Hindu Buddhist Kingdom, Indonesia became the largest Islamic country in the world. If there is any lesson to be learnt by Americans at all, the history of my country is worth pondering upon. We are not hate mongering, bigoted people; rather, we are freedom loving, democracy loving and human loving people. We just don’t want this freedom and democracy to be taken away from us by our ignorance and misguided ‘political correctness’, and the pretension of tolerance.

The Guardian calls this Monk

A Preacher of hate

The BBC says: His sermons preach animosity and his target is the Muslim community, mainly the Rohingya.