Stop Killing the Muslims in Burma! 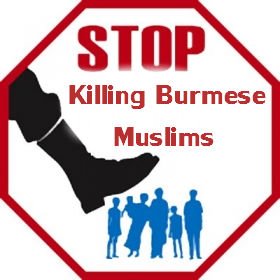 Burma is a Buddhist country whose total population is 75 million in which 0.7 million are Muslims. And the sad thing about that these 0.9%, yes less than 1% of total population is not safe any more in their own country Burma. The Burma Muslims have been under this affliction after 1962 when the army usurped the power in Burma. Time to time and year to year the murder of innocent Burma Muslims are increasing.

3rd June 2012 was the black day for the Muslims of Burma when 11 innocent Muslims including kids were killed by
he Burmese Army and the Buddhist mobs after bringing them down from a bus. After that the a vehement protest was carried out in the Muslim majority province of Arakan, but the Protestants fell victims to the tyranny of the mobs and the army.

Yes, in the result of the protest of Burmese Muslims the Burmese army and extreme Buddhist burned more than 500 villages which cause the thousands of death and thousands have been exterminated. Their houses, their mosques, their school and their hospitals has been burned because they protest for 11 innocent Muslims which has been killed just because they were Muslims.

According to the Burmese Muslims around 0.2 millions Muslims has been effected and there is not a single Muslim family of these who does not lose their family member or get injured.

Indeed the incident of Burmese Muslims are sad and not forgotten but the same time the most shocked thing about the whole story is that not a single media of this world had published any news about it. And all the human rights organizations have maintained a criminal silence up till now.

This is not a new thing or an unprecedented massacre. Muslims have been a subject to such hostility even before. If we go through the annals of history we come to the very tenable conclusion that Muslims were always on the suffering side. Islam is a religion of peace and harmony. It doesn’t allow its followers to lay-waste any other tenet. This leaves behind a big question mark.

Why are the followers of such a peaceful religion being oppressed from time to time ?

What is happening in Burma is beyond belief, here are images from various sights, 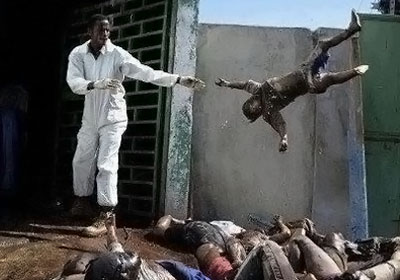 OOOps a little problem here, The photo shows a man throwing a dead body at the morgue of the general hospital, Port Au Prince, Haiti, January 15, 2010, following the 7.0-magnitude quake on January 12

But there really is a genocide going on, see here Problem here, the victim here is Indonesian, and a victim of the 2004 Tsunami Another victim of the 2004 Tsunami OOOps another snag, these monks are wearing red, well what we see here is Tibetan monks in red gowns grimly preparing mass funeral pyres for victims of an earthquake 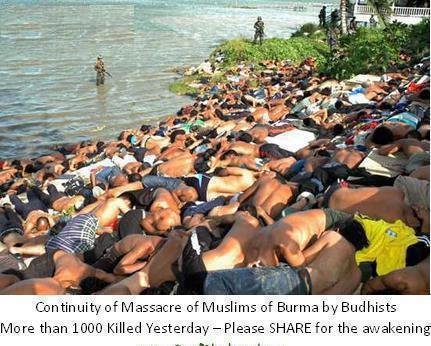 This picture is also misleading and has been taken from Riots in Thailand taken in 2003.

The picture below has got me beat, I can not find any info about it, but there is one site which has it posted Nov 2010 Link The 2010 South Kivu road tanker explosion took place late in the afternoon of 2 July 2010 in the Democratic Republic of the Congo.[

A road tanker travelling from Tanzania overturned in the village of Sange in South Kivu, and later exploded, resulting in at least 230 deaths and 196 injured.

The only conclusion from the above is that you should never trust anything a Muslim supporter says. 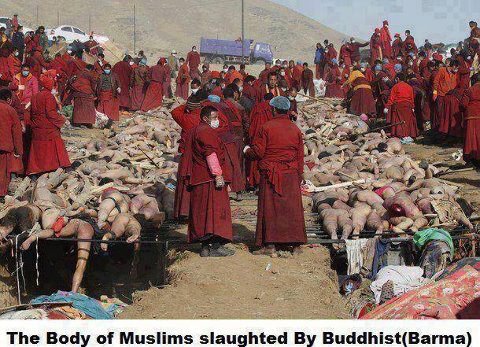 If you look at this link you will notice a hundred odd images accusing the buddhists monks of slaughter, yet to find this image in it,s proper context is almost impossible, this image and the the other false images have already been used to instigate riots in Indonesia and India.

All the MSM have this Image and the others in their archives, so we can not only mistrust the muslims, but also the media, who decline to republish these images in their correct context, if muslims are incited to riot and there are people murdered, hen the media are just as responsible, the will have just as much blood on their hands as the muslims.

I see what you mean.  So anyone searching for "Muslims in Burma" will get those lying images.  So not only Muslims, but also the MSM, are conspiring in this duplicitous fraud.

I have been a bit slow to answer the above. Now how will you react if I say there is no such thing as Rohingyas

The term Rohingya was invented or coined only after the failed Bengali-Muslim insurgency widely known in Burma as the Mujahid from 1948 to 1954 in the north-western region of Arrakan in Burma.

Yes the jihadis reinvented themselves as the Rohingyas and started the internation-media and political and so-called human rights campaigns to re-establish their Bengali-Muslim enclave again in Burma. And just as we see with the Palestinian hoax, the UN, Human Rights organisations and media are all playing along with the hoax