Thailand looks like it will be another Bosnia.  85% of the buddhists have now left the 3 southern provinces.  The government and people are divided not just on religious grounds, but also on the basis of the countryside versus the urban elite.

Note the careful and extensive planning that went into this carnage. As one jihadist put it, "We love death. You love your life!"

A first batch of explosives planted inside a parked pickup truck ripped through an area of restaurants and shops in a busy area of Yala city, a commercial hub of Thailand’s southern provinces, district police chief Col. Kritsada Kaewchandee said.

About 20 minutes later, just as onlookers gathered at the blast site, a second car bomb exploded, causing the majority of casualties. Eleven people were killed and 110 wounded.

More than 5,000 people have been killed in Thailand’s three southernmost provinces of Narathiwat, Pattani and Yala since an Islamist insurgency flared in January 2004.

“This is the worst attack in the past few years,” said Col. Pramote Promin, deputy spokesman of a regional security agency.

“The suspected insurgents were targeting people’s lives,” he said. They chose “a bustling commercial area, so they wanted to harm people.”

Most attacks are small bombings or drive-by shootings that target soldiers, police and symbols of authority, but suspected insurgents have also staged large attacks in commercial areas.

A blast also occurred on Saturday at a high-rise hotel in the city of Hat Yai, in the nearby province of Songkhla. Officials had initially attributed that blast to a gas leak, saying it was unrelated to the attacks blamed on insurgents. But after inspecting the hotel’s underground parking lot, authorities found a severely damaged sedan and a hole created by the explosion’s impact.

Maybe its time to drop a few million paper aeroplanes of peace on the area again?  The only reason it didn't work last time, must be that there weren't enough paper planes dropped - well, at least that's how a leftist retard's brain would understand it.

I was thinking of sending up a chinese lantern myself. I think that should stop them.

I can't know my history or geography as well as i thought. I didn't realise that southern Tailand  was a peace loving muslim country. No wonder people are dieing from bomb blasts. Once islamic peace has come to town its only a matter of time before criminal repressors are being dispatched to the morgue in pieces.

Thank Allah for all those peaceful muslims living around the world,  Awwwwww bless them all, with there little Ak's and their IED's. What would we do without them. SONGKHLA, April1 - Thailand's national police chief Priewpan Damapong confirmed on Sunday that the explosion in the underground parking of Lee Gardens Plaza Hotel on Saturday was caused by a car bomb linked to bombings in Yala. No major media is covering this war on Thailand. I have seen nothing in the States in this.

As with any breaking news, the next day we are seeing more information but there are still discrepancies between official sources as to the number of victims. That is not surprising given that the four of the bombs were powerful and caused hundreds of casualties.

Additional Saturday attacks now being reported include a failed bombing in the North East where a bomb went off prematurely (and by all indications, with only a partial explosion) as a terrorist was taking the device to a market. The bomb maker, one adult accomplice and a 7 year old child were injured. The adults were apparently using the 7 year old as cover during the bomb delivery.

The timing of the attacks is a surprise to most Thais, and of serious concern to law enforcement. It was expected that the Muslim jihadists would launch major attacks during the upcoming Thai New Year festival 'Songkran' from April 13 to 15. The question on everybody's mind is whether these attacks came early to avoid increased security during Songkran, or whether they are the start of a larger campaign to run through the New Year festival.

As Songkran approaches, observers are not discounting the potential that the Iranians and other foreign Muslims recently arrested with large quantities of explosives were to be part of a terror campaign during Thailand's largest holiday.

Here is a list of the Jihadist attacks on Saturday:

In Yala Province commercial district there were three coordinated lunchtime bomb explosions on Saturday. Two vehicle bombs went off minutes apart to attract emergency personnel and onlookers to the scene, then the main event was detonated by remote control: a truck bomb loaded with gasoline. There are conflicting reports that two motorcycle bombs also contributed to the carnage.

A car bomb exploded in the underground parking garage of underground parking of Lee Gardens Plaza Hotel, a large hotel and shopping complex in Hat Yai. The blast was powerful enough to penetrate through three floors of steel reinforced concrete and into the hotel's first floor.

(Has statement from Prime Minister Yingluck)

A motorcycle bomb was detonated in front of the local police station at 2pm Saturday, slightly injuring one officer.

A villager was killed in an ambush while walking home on a local road in Ban Khok Pan Ton in Pattani’s Mae Lan district late Friday night, reports said.

The victim was identified as Ama Wani, 34, a resident of Ban Khok Pan Ton. He was walking home with his four-year-old son on the local road in the village when gunmen hiding in a roadside forest sprayed bullets at him.

Ama was shot in the head and died on the spot. His son was unhurt.

Three people were injured yesterday by a home-made bomb in Khon Kaen.

Danai Nasongserm, 27 and Kriengkrai Hansa, 20, were seriously hurt, while Thanakorn Nasongserm, 7, was slightly injured by the bomb while they rode a motorcycle to a market in Khao Suan Kwang district in the Northeast province.

Police suspect that the bomb, allegedly made by Kriengkrai, went off accidentally while they were on the motorcycle.

Police said that after Kriengkrai recovers, they would summons him for interrogation to investigate where and how he got materials to make the bomb and how he did it. Police would take legal action against him. 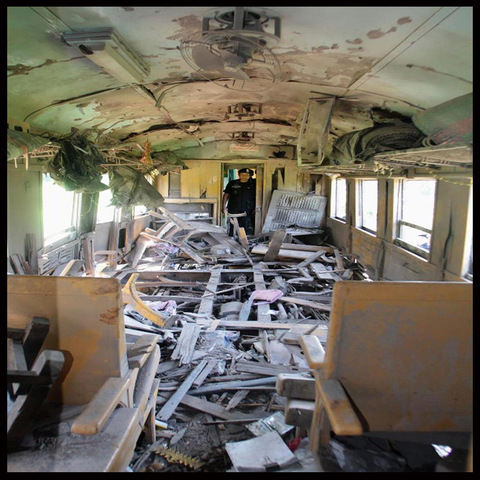 Thai security personnel inspect a passenger train, which was damaged by a bomb detonated by suspected insurgents, in Thailand's southern Narathiwat province November 18, 2012. One defence volunteer was killed and 14 people including passengers were wounded in a bomb explosion, police said.

Maybe its time to drop a few million paper aeroplanes of peace on the area again?  The only reason it didn't work last time, must be that there weren't enough paper planes dropped - well, at least that's how a leftist retard's brain would understand it.

No Alan, it was not paper planes that where dropped, it was origami Cranes

It will add a new disscussion, so as to give an insight to what we are dealing with