Sadako was in her first year of life when the first atomic bomb was dropped on Hiroshima. She was two kilometers away from where the bomb exploded. Most of Sadako's neighbors died, but Sadako wasn't injured at all, at least not in any way people could see. Right after the war there wasn't enough food and medicine to go around, making it difficult to stay alive. Fortunately several other countries sent food and money to help Japan get back on its feet.

Up until the time Sadako was in the seventh grade (1955) she was a normal, happy twelve year old girl. However, one day after an important relay race that she helped her team win, she felt extremely tired and dizzy. After a while the dizziness went away leaving Sadako to think that it was only the exertion from running the race that made her tired and dizzy. But her tranquillity did not last. Soon after her first encounter with extreme fatigue and dizziness, she experienced more incidents of the same.

One day Sadako became so dizzy that she fell down and couldn’t get up. All of her school-mates noticed and informed her teacher. Later Sadako’s parents took her to the Red Cross Hospital to see what was wrong with her. Sadako found out that she had leukemia, a kind of blood cancer. Nobody could believe it.

At that time they called leukemia the “A-bomb disease”. Almost everyone who got this disease died, and Sadako was very scared. She wanted to go back to school, but she had to stay in the hospital where she cried and cried.

Shortly thereafter, her best friend, Chizuko, came to visit her. Chizuko brought some origami (folding paper). She told Sadako of a legend. She explained that the crane, a sacred bird in Japan, lives for a hundred years, and if a sick person folds 1,000 paper cranes, then that person would soon get well. After hearing the legend, Sadako decided to fold 1,000 cranes in the hope that she would get well again.

Sadako's family worried about her a lot. They often came to visit her in hospital to talk to her and to help her fold cranes. After she folded 500 cranes she felt better and the doctors said she could go home for a short time, but by the end of the first week back home the dizziness and fatigue returned and she had to go back to the hospital.

Sadako kept folding cranes even though she was in great pain. Even during these times of great pain she tried to be cheerful and hopeful. Not long afterwards, with her family standing by her bed, Sadako went to sleep peacefully, never to wake up again. She had folded a total of 644 paper cranes.

Every one was very sad. Thirty-nine of Sadako's classmates felt saddened by the loss of their close friend and decided to form a paper crane club to honor her. Word spread quickly. Students from 3,100 schools and from 9 foreign countries gave money to the cause. On May 5, 1958, almost 3 years after Sadako died, enough money was collected to build a monument in her honor. It is now known as the Children's Peace Monument, and is located in the center of Hiroshima Peace Park, close to the spot where the atomic bomb was dropped. 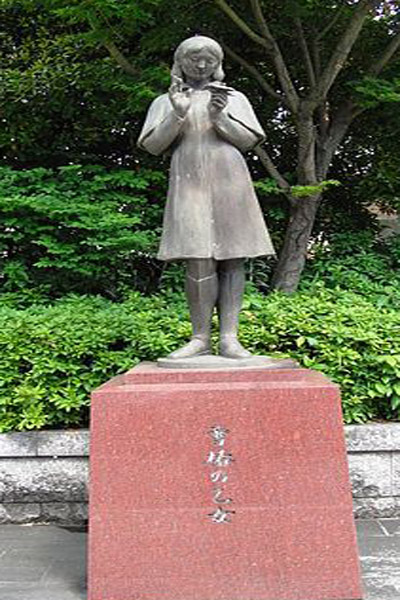 Children from all over the world still send folded paper cranes to be placed beneath Sadako’s statue on August 6 - Peace Day. And in so doing, they make the same wish which is engraved on the base of the statue:

Sunday, 5 December 2004, Ordinary Thais across the nation have folded and written peace messages on the paper cranes in a campaign devised by Prime Minister Thaksin Shinawatra.

The birds were dropped by military planes over the country's Muslim south after a surge of violence in the area. Ordinary Thais across the nation have folded and written peace messages on the paper cranes in a campaign devised by Prime Minister Thaksin Shinawatra. But those critical of the campaign say it will not solve the complex problems that have caused the violence. 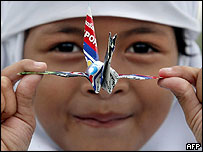 A bomb exploded in Narathiwat province on Monday morning, injuring at least one soldier, police said. On Sunday, as the 50 planes made their drops, suspected Muslim militants shot dead a former prosecutor in Pattani.

I've read this story before, but its still so ridiculous.  As with the Dalai Lama, such people do not have a serious enough grasp of the existential nature of the problem, and should never be given political control of a nation.

(Yes, I know, the Dalai Lama has now separated Church and State, and personally relinquished that role).