Thailand; This Is War

One Muslim man was shot dead while he was on his way back home from the village’s mosque in Pattani early morning on Saturday, Pattani police said.

The victim, Mayusoh Malee, 70, was attacked on a local road in front of Islam Pattana school at Moo 1, Tambon Barahoh of Pattani’s Maung district.

He was shot several times in his body and died at the scene. Thai policemen inspect the wreckage of a vehicle after a roadside bomb attack in Thailand's Yala province, February 27, 2008.

The first was a car bombing in the city of Yala on Saturday afternoon, police said. The man who was driving the car was killed, authorities said. No further details were released.

n Pattani, one person was killed and nine others injured about 8:30 p.m. Saturday when a bomb planted in a parked car exploded, police said.

Another bomb was found inside the restaurant of the CS Pattani Hotel, but authorities were able to defuse it.

The hotel is considered to be in a relatively safe area and is frequented by journalists and government officials.

The owner, a senator who sustained minor injuries, said the incident might have stemmed from a local political issue. 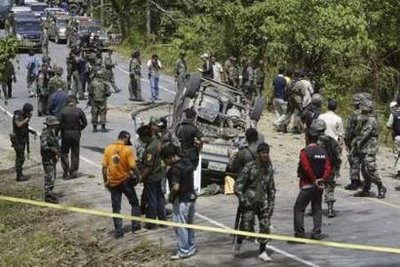 Thai policemen and soldiers inspect the wreckage of a vehicle after a roadside bomb attack in Thailand's Yala province, March 17, 2008 A policeman takes a photograph as the body of an administrative sub-district official is removed in Yala province, nearly 1,084 km ( 674 miles) south of Bangkok, March 17, 2008. The official and another man were shot dead by suspected Muslim militants, police said.
Moslems attacking children is not a local political issue

8 children injured in Yala bomb attack
Yala - Eight children were injured, three seriously, when insurgents detonated a bomb at a playground in Bannang Sata district.
The bomb hid inside a motorcycle and left near a playground behind a house exploded at about 11 am, Banang Sata district chief Methi Kanachanphuwa said.

Some of the injured children were sitting in the house and the rest were playing in the playground.

Methi said the insurgents might time the bomb to explode when a patrol unit of soldiers passed the spot but no soldiers were injured. 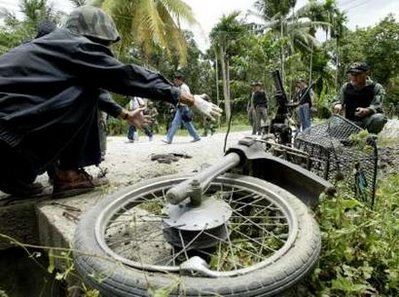 Thai policemen inspect the wreckage of a motorcycle after a bomb explosion in Yala province, nearly 1,084 km ( 674 miles) south of Bangkok, March 17, 2008. The explosion wounded eight people, including a soldier, police said.

Moslems blowing up cars is not a local political issue

IT IS MOSLEMS STRUGGLING FOR PEACE

AND THEY CALL IT JIHAD AS SEEN IN BALI 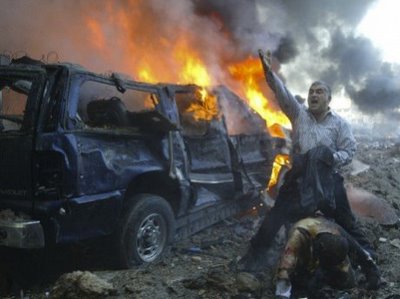 AS SEEN IN LEBANON AS SEEN IN IRAQ AS SEEN IN ISRAEL 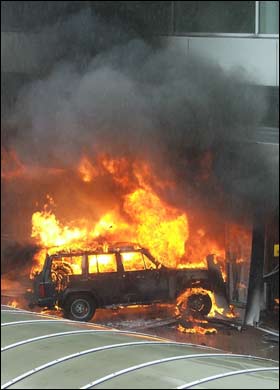 AS SEEN IN GLASCOW

Moslems attacking children is not a local political issue

IT IS MOSLEMS STRUGGLING FOR PEACE

AND THEY CALL IT JIHAD

AS SEEN IN ISRAEL 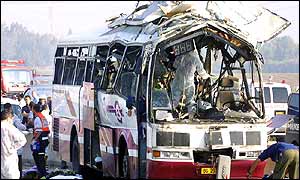 AS SEEN IN BESLAN AS SEEN IN INDONESIA AS SEEN IN ALGERIA 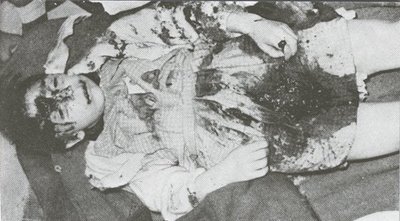 The young girl raped and assassinated was seven years old.

AS SEEN IN BANGLADESH 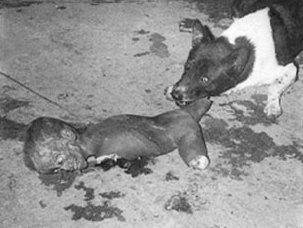 This Hindu child was among thousands that where slaughtered

AS SEEN IN LEBANON 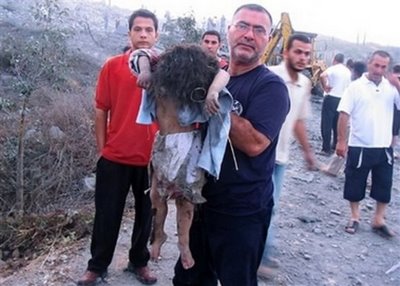 Where the children are the brave martyrs in the front-line of fire, shielding the heroic warriors of islam.. 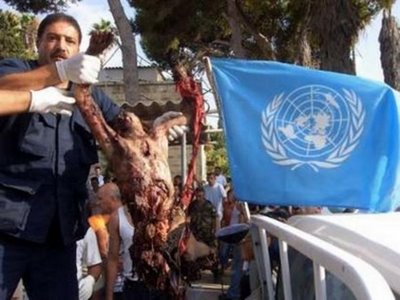 and children are the masters of propaganda

THIS IS NOT A LOCAL POLITICAL ISSUE

A war where terror is the weapon of choice

Something all terrorist attacks have in common is their perpetration for a political purpose.And moslems are using religion as a disguise to mislead the non moslem of the political agenda of islam. Terrorism is a political tactic, not unlike letter writing or protesting, that is used by activists when they believe no other means will effect the kind of change they desire.

The change is desired so badly that failure is seen as a worse outcome than the deaths of civilians. This is often where the interrelationship between terrorism and religion occurs. When a political struggle is integrated into the framework of a religious struggle, such as over the control of an ancestral homeland or in the moslem case, world domination, failing in the political goal becomes equated with spiritual failure, which, for the highly committed, is worse than their own death or the deaths of innocent civilians.

Deliberate targeting of non-combatants – It is commonly held that the distinctive nature of terrorism lies in its intentional and specific selection of civilians as direct targets. Specifically, the criminal intent is shown when babies, children, mothers, and the elderly are murdered, or injured, and put in harms way.

Much of the time, the victims of terrorism are targeted not because they are threats, but because they are specific "symbols, tools, animals or corrupt beings" that tie into a specific view of the world that the terrorist possess.

Their suffering accomplishes the terrorists' goals of instilling fear, getting a message out to an audience, or otherwise accomplishing their often radical religious and political ends. Terrorists almost invariably pretend to be non-combatants, hide among non-combatants, fight from in the midst of non-combatants, and when they can, strive to mislead and provoke the government soldiers into attacking the wrong people, that the government may be blamed for it

Permalink Reply by Joe on April 18, 2010 at 1:23
I thought I'd add some more details to this. I read a couple of weeks ago that 75% of all the buddhist Thai people in these three states have now relocated to safer parts of Thailand. That means the ethnic cleansing by jihadists is almost complete in less than a decade.

It might seem from this that the Thais have meekly conceded these territories. However, my buddhist Thai friends have told me that throughout Thailand people say "if you meet a poisonous snake and a muslim on the road, make sure you kill the muslim first, as they are far more treacherous than the snake". At least in their opinions they are not being ham-strung by political correctness.

It is an utter disgrace that the western media don't cover this jihad in Thailand. The death toll has exceeded that of the Twin Towers, yet most westerners don't even know it is going on just a few hundred miles from the tourist beaches of the most popular long-haul destination.

As much as I love their religion, I fear that if buddhists don't stand up to islam, it will just sweep them aside. Buddhism is one of the greatest glories of humanity, and must be protected from the savages who are too stupid and ignorant to see how superior it is to their barbaric desert cult.

Most people in the world would find it hard to believe that the backward country that is Afghanistan had a long history of buddhist culture, before it was invaded by the muslims.

Permalink Reply by Joe on April 25, 2010 at 0:43
I found this website that actually contains pictures of some of the victims of these hideous crimes in Thailand. Please don't look at this link if you are squeamish.

Many countries routinely show things like this on the news - they aren't as paternalistic as UK TV companies are. But the cosequence of that is that we are not accustomed to viewing such gruesome photos.

I have just updated this article, because the images did not show, due to google deleting my account

It is an utter disgrace that the western media don't cover this jihad in Thailand. The death toll has exceeded that of the Twin Towers, yet most westerners don't even know it is going on just a few hundred miles from the tourist beaches of the most popular long-haul destination.

It is more than a disgrace, People just do not want to know, there was a minor outrage after the London Bombings, then back to sleep again. Incidentally the London Bombings doesn't figure in the top 100 terror attacks. Despite the fact that we are getting the data of islamic atrocities daily, the public doesn't what to have it media/opium comfort zone tarnished. People 100 years ago where more aware to the dangers of the turks, tatars, arab the couriers of islam.