Peter McLoughlin's book on the Muslim grooming gangs, Easy Meat: Inside the British Grooming Gang Scandal, has now been updated to include new material bringing it up to 2016.

It can be bought in paperback and ebook from Amazon. McLoughlin is maintaining a website of material supplementary to the Easy Meat book - http://www.pmclauth.com/ .

UPDATE: In January 2022, Amazon removed this book from its website, without explanation. Waterstones has it listed

but is it 'currently unavailable'.  Give them notice via email for when it is back in stock.  But don't hold your breath.

The link to his website points to a page showing you what the additional material in the book covers.

There is also a very useful interactive, searchable table on McLoughlin's website. You can search and sort this table using names, towns, dates to see this grooming gang scandal from different angles.

The original video was taken down from Youtube at the end of last year.  The text below was part of the video on Youtube.

Alibhai-Brown illustrates her point by zeroing in on this sentence by Berelowitz & co.: "Perpetrators come from all ethnic groups, and so do their victims -- contrary to what some may wish to believe." In response to which Alibhai-Brown offers this comment: "Yes, we know they come from all backgrounds. But that rather cutting second line is directed at people like me who believe that in some British cities -- especially in the North of England -- circles of sexual hell for young girls are run by gangs of Muslim men (most of Pakistani or Bangladeshi heritage) who mostly prey on white girls....To generalise their crimes, and lump them in with all the other abusers across the country, is to deny what the victims of these men and their families are saying about the abuse that has gone on."

Indeed. Of course, the OCC's statement about perpetrators coming "from all ethnic groups" is yet another example of the handy PC dodge whereby the link between Islam and pretty much any of its more horrific aspects can be swept away by means of a simple rhetorical formula. For example: "Honor killings occur in a wide range of religions." Or: "Female genital mutilation is not an exclusively Islamic phenomenon." Or: "The practice of forced marriages is not restricted to Muslim families." All true -- and all cynically designed to avoid the uncomfortable statistical reality, and to protect the speaker from being accused of racism or Islamophobia. (It's no surprise that ITV's brief online account of the OCC report actually made that insipid truism its headline: "Report: Child exploiters 'come from all ethnic groups.'")

"The report," notes Alibhai-Brown, "points out that 28 per cent of the victims they found were of black and Asian background. But it doesn't state what it should have: that some of the worst long-term abuse is carried out by mainly British Pakistani men targeting lost young white girls, often from troubled or poor families....The children are neglected and hungry for love. The men offer treats, car rides and kebabs, then drugs and alcohol; and then they corrupt them." Alibhai-Brown argues that while authorities fear "that the racial aspects of child sex gangs will be hijacked by groups such as the English Defence League," it is important to "confront some of the values that drive such men to prey on white females" and to look squarely at "some Asian cultural assumptions that make the paedophiles feel no guilt or shame about what they do."

What to say about this? Well, first of all, anyone who is genuinely interested in facing up to the truth of these matters needs to stop talking, as Alibhai-Brown does incessantly in her article, about race. This is not about race but about religion -- not about black and white but about Muslim and infidel. Alibhai-Brown wants to be seen as bravely pulling back a curtain on an ugly reality, but her repeated reference to dark-hued men and "white girls," and her use of that cowardly, dishonest (and, alas, ubiquitous) British euphemism "Asian" is nothing more than a way of skirting the truth -- namely, that the "cultural assumptions" at work here aren't "Asian" -- aren't Japanese, Chinese, Vietnamese, Mongolian, or Thai -- but Islamic. As she and most of her readers well know, countless Muslim boys are brought up to view infidel females as little more than whores whose "immodest" attire makes them legitimate targets for physical assault. Most Westerners who are seriously concerned about these matters have long since learned that the Koran itself condones such conduct, and that in cases of rape it is the victims, not the perpetrators, who are considered the guilty parties. These repulsive facts have been widely known in Europe for many years now.

--
for info on the book referenced by Gavin go here:

Sex abuse increase among children - https://www.bbc.co.uk/news/uk-58332341 - it seems odd that the numbers should suddenly increase - I wonder if the abusers are muslim/african males victimising white girls ?

We really need to know, but of course, these questions cannot even be asked. It's possible that it is just in response tho all the free hard core Pom that children can access now- but we will never know

Honest and open statistics and factual information about sex abuse at every level would give us a tool to devise ways to limit sexabuse, especially older "children" raping younger children.

My experience in the classroom was that it was muslims sexually assaulting white girls. I had to threaten them with violence in order to end it in my classes. Muslims see women, girls and children including their own family as objects to be used, controlled, abused and discarded.

There seem to be very few women promoted to senior positions in the 'protective' services (police, army, etc), who seem interested in protecting the vulnerable, never mind actually  capable of it.  All they seem good at is mouthing platitudous phrases.

The town of Rotherham has been back in the news over the last week or so.

Despite the huge furore back in 2014 when the Jay Report laid bare the shocking scale of the Islamist grooming scandal in Rotherham, nothing substantial has been done to tackle this criminal plague. 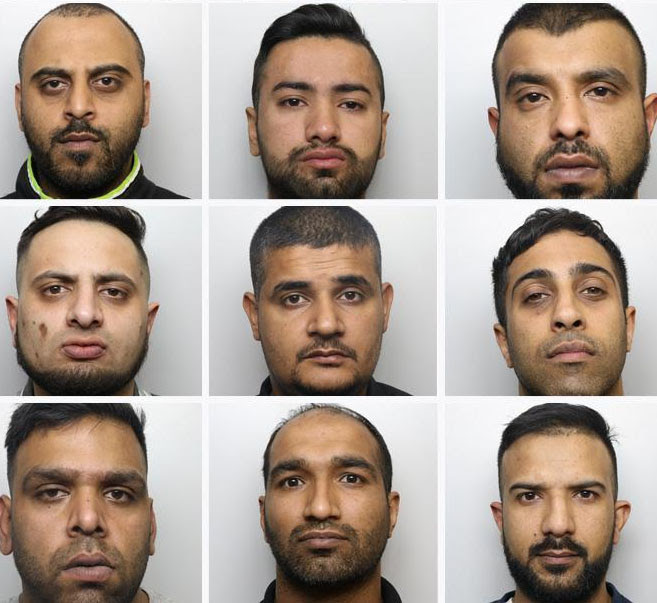 The Jay Report publicised that over 1,400 underage English girls had been groomed, raped, tortured, abused and murdered by Islamist grooming gangs over a twenty year period.

Last week, a report published by Rotherham councillors stated there were “multiple examples of active grooming and CSE” (child sexual exploitation) still happening in the town.

A TV station then asked for details and received a reply stating that some 1,665 children may have been groomed and sexually exploited since 2017!

So, far from clamping down on Islamist grooming gangs, the number of victims has exploded, in a much shorter time frame.

The situation is getting worse, and no one seems to be interested, because, as the Jay Report originally publicised, the authorities are terrified of being labelled "racist". 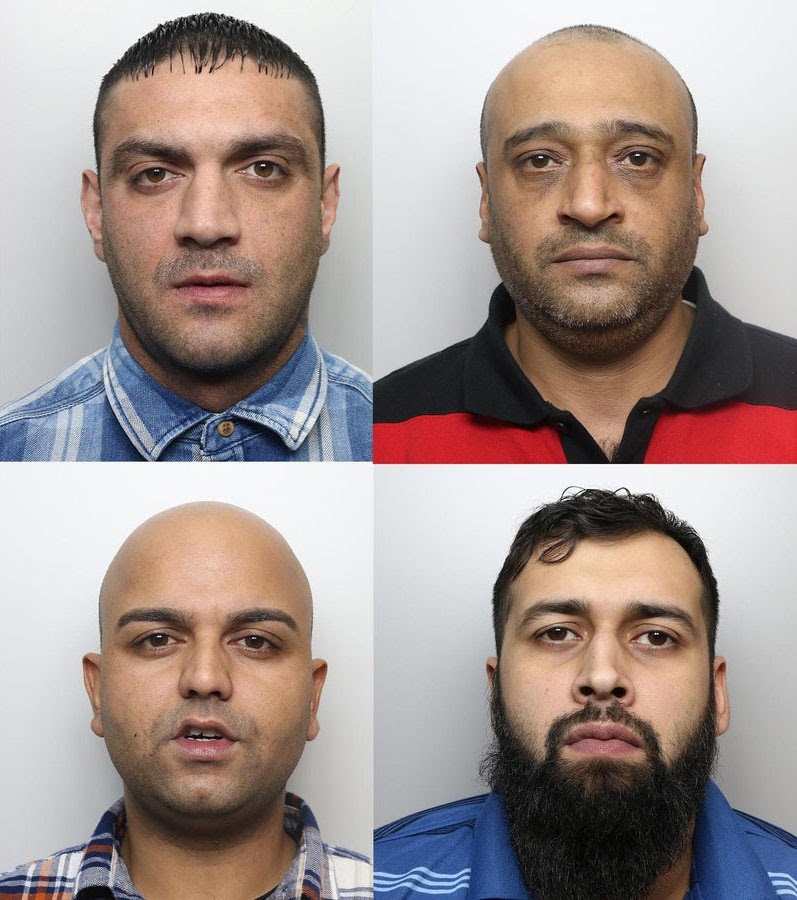 Just up the road in Bradford, there has been an explosion of cases involving Islamist grooming gangs in Bradford, an issue that is utterly ignored by West Yorkshire Combined Authority and Bradford Council.

The local MP is demanding a Rotherham-style inquiry to examine the "true extent" of the Islamist grooming gangs scourge in the town, but this is being resisted by local authorities who want to swerve any scrutiny. 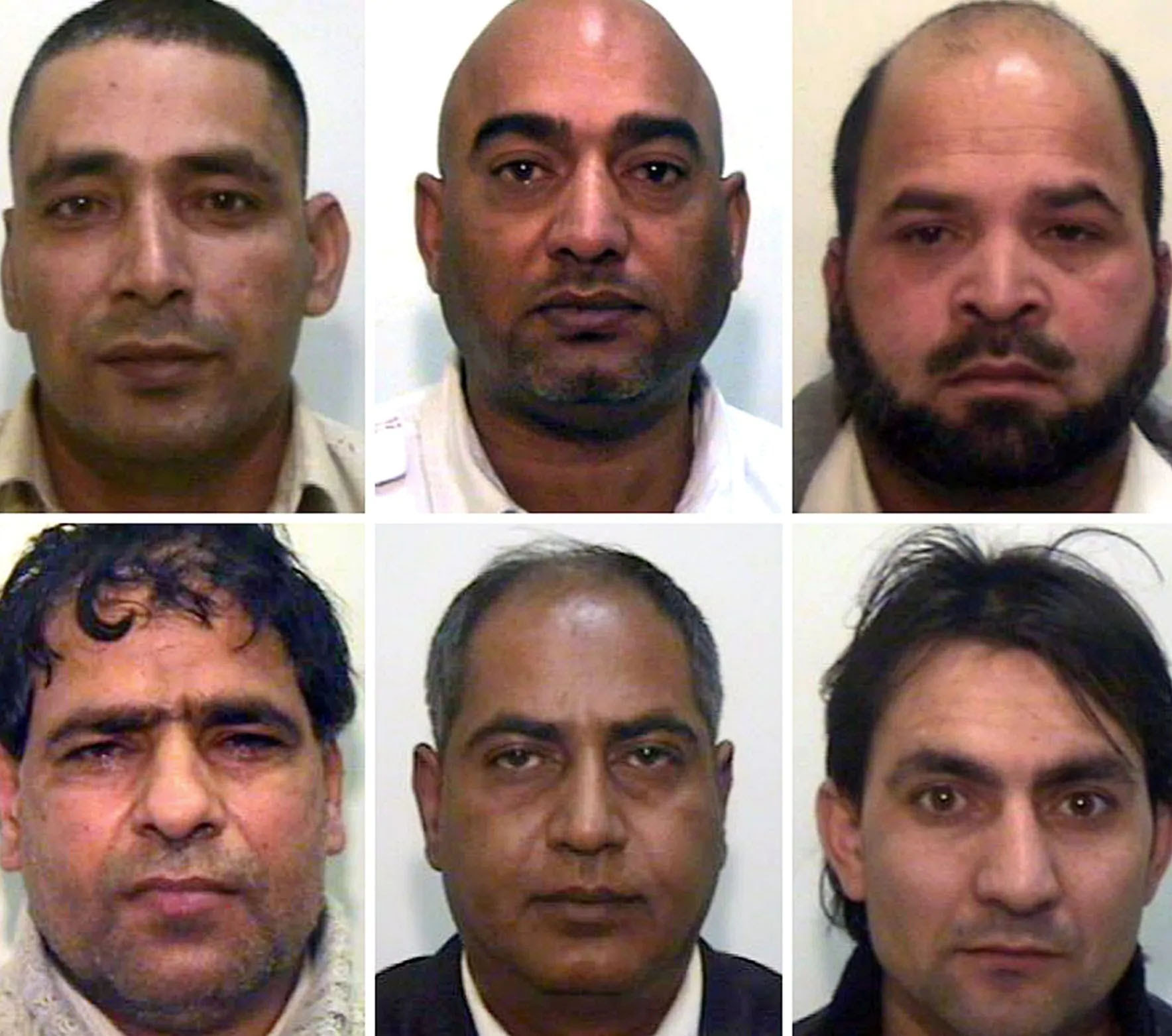 Islamist gangs target underage non-Muslim girls for sexual exploitation, during which the victims are gang raped, passed around from man to man like a piece of meat, with some even being tortured or murdered.

In almost all the cases, these gangs have been allowed to flourish untouched because the authorities - namely the police and social services - are terrified of being labelled "racist".

It was stated publicly in the House of Lords that the total number of victims is somewhere in the region of 250,000 underage English girls, all of whom have been raped by Islamist grooming gangs.

Despite the horrific scale of this crime wave, it is consistently under-reported and ignored by the establishment. 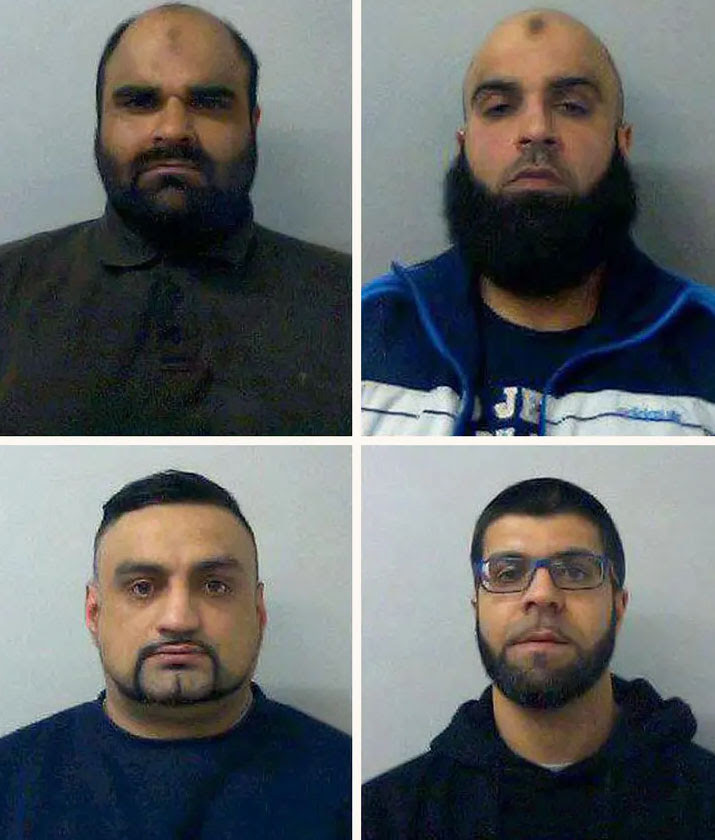 The police and social services would rather 250,000 underage English girls are regularly raped and abused than have to face up to the Islamist paedophile gangs.

They are cowardly and criminal.

The authorities will never properly defend and protect our children.

They would throw our children under a bus to swerve being labelled "racist".

Ever since the launch of Britain First back in 2011, we have consistently sounded the alarm about the Islamist grooming gang scandal and the lack of interest from the authorities due to political correctness. 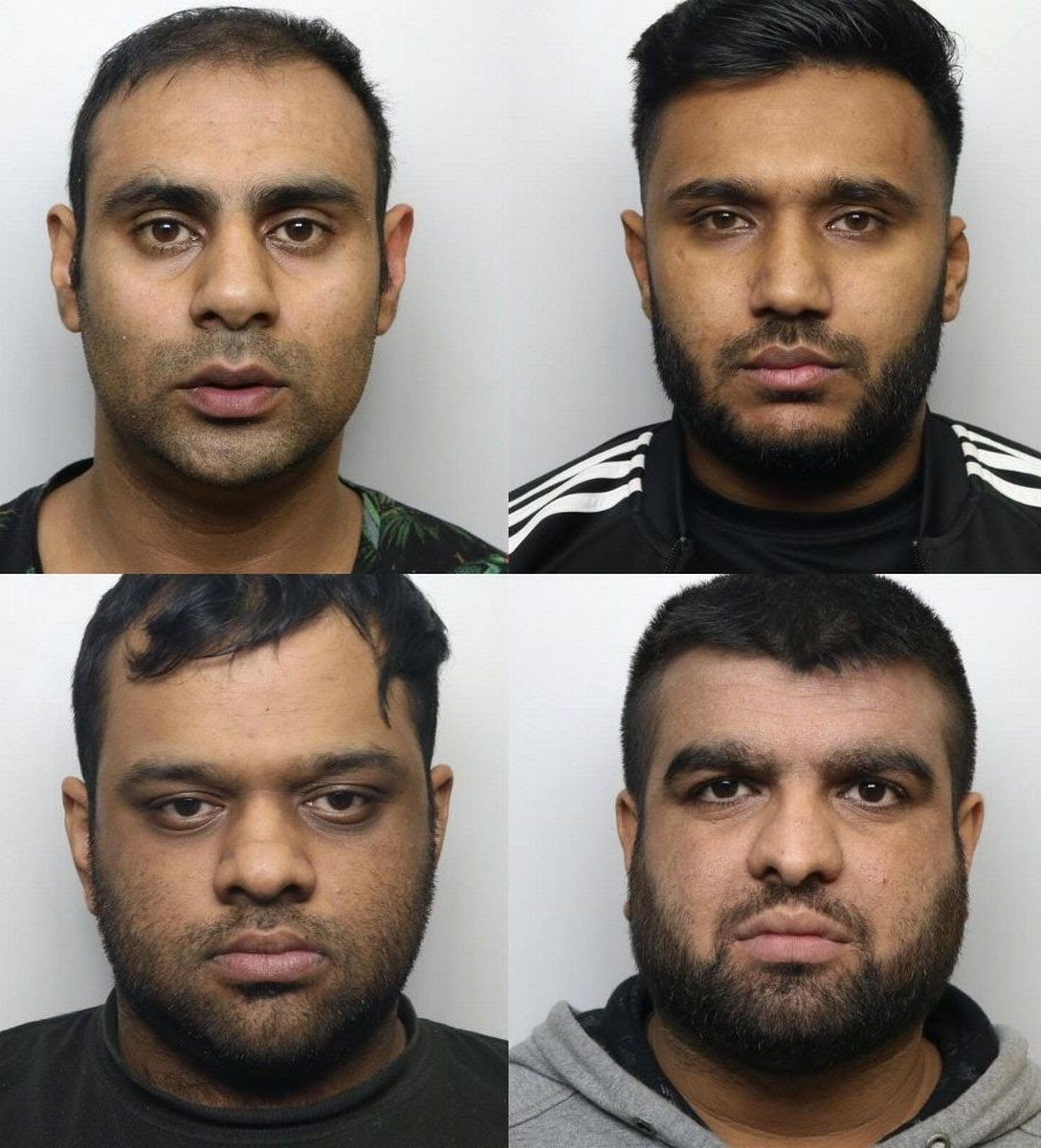 We have visited every grooming zone across the nation to raise awareness.

Islamist grooming gangs will continue to target our children unless we ramp up the pressure on the authorities.

Britain First will never abandon our children, regardless of any consequences.

We will fight to protect them no matter what.

These men are ugly in every sense of the word. They have no right to be in Britain and their behaviour should be punished with immediate deportation back to country of origin with their entire family and tribe. No rights and no right of appeal.

Rotherham Abuse Scandal: 1,665 children may have been at risk since 2017, GB News can reveal

The data also shows the number of children identified as potentially being at the highest risk increased between 2016 and 2020.