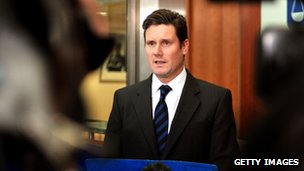 The way police and prosecutors in England and Wales deal with alleged sexual offences against children is to be overhauled in the wake of the Jimmy Savile scandal.

Director of Public Prosecutions Keir Starmer will say in a speech that the accounts of alleged victims have been treated too cautiously.

New guidelines for police and prosecutors will be drawn up.

And a panel will review cases where alleged perpetrators were not charged.

Mr Starmer is keen that the Savile case should serve as a watershed for the criminal justice system, BBC home affairs correspondent Danny Shaw said.

A review into allegations against the late DJ and TV presenter found Savile had carried out more than 200 sexual offences over a 54-year period.

Allegations were reported to police several times while he was alive but no action was taken against him.

"A new genre of miscarriages of justice has arisen from the over-enthusiastic pursuit of these allegations". Those were the words of the Home Affairs Committee in 2002 after hundreds of people had been investigated about historical child abuse in children's homes and other institutions.

Many were wrongfully convicted and as a result the justice pendulum swung the other way: police adopted a more sceptical approach and prosecutors were more picky about the cases they took to trial.

Now, after the Savile affair and the emergence of other sex abuse allegations that have lain dormant for years, there's a sense that the pendulum needs re-positioning again.

The difficulty, as Keir Starmer acknowledges, is to set the right balance - so that investigators adopt a less cautious approach to what victims say while testing and questioning their accounts.

Experience suggests it won't be easy: expect a few cases to go wrong before things settle down.

But standards used for establishing the credibility of someone making an allegation can mean vulnerable victims are not believed and are unprotected by the criminal law, he will say in his speech.

This is because complainants often have characteristics - such as inability to trust authority or to report intimate details - which both make them vulnerable and put their credibility in doubt.

In future, investigators will be expected to test the credibility of an allegation by focusing on the suspect as well as the alleged victim and whether there are links to other cases.

The new College of Policing, with the agreement of the Crown Prosecution Service and Association of Chief Police Officers (Acpo) will develop a new policy to replace the 19 sets of guidelines for investigating child sexual abuse that currently exist.

Mr Starmer will say the new policy must be informed, coherent and able to withstand the test of time: "We cannot afford another Savile moment," he will say.

But he said after the Savile affair there was a sense that "the pendulum needs re-positioning again".

The whole cowardly establishment is now going to recognise this problem because one white man has been found to be involved.  They were happy to let it continue underneath the radar while it was just 'Asian' (read 'Muslim') gangs, but now, finally, they have to start taking the children's complaints seriously.

You couldn't make it up.