This form is a general dumping ground for statistics on the progression of the civil war in different countries - noting the deaths, injuries and rapes, from crime and from terrorism.

Rather then expend a lot of effort in advance, this forum is an unordered collection area for those statistics.  If ever a need arises to justify the figures - for example prior to a debate or interview - then further work can be performed to validate the figures for each country required.

Rape has always been a weapon of war.

How can half off racist murder victims be white. That just isn't possible. (not in a liberals head anyway)

Another white child killed by cowardly immigrants (from a webpage no longer available)
The night between Saturday and Sunday the 14-year-old white boy James Waite was stabbed to death by a gang of immigrants in Sollentuna north of Swedish capital Stockholm.
Waite had participated in a barbecue with his friends when he on the way home met his assassins, a group of five to seven immigrant youths.

"Are you a Nazi?" one of them asked young James,........
.........whereupon he was assaulted, stabbed several times in the chest, one blow piercing his heart.   He later bled to death on the way to a hospital.
The diabolic media in Sweden have tried to defuse what really happened, referring to the fight as a "racist gang fight" between skinheads and immigrants, in some cases not even informing that a "racist" was  the victim.
Some have used deliberate deceptive phraseology such as "several racists were at the scene where the murder took place," not mentioning the ethnicity of either victim or  perpetrators.
Some media stories report that one immigrant youth received a knife wound, "forgetting" to mention that he received it by mistake from another knife-wielding immigrant.

Tommy Robinson says the Metropolitan Police have told him on the quiet, that they know who did the Muswell Hill "arson" on a Somali community centre: 2 Somalis.

Now the fake bomb scare at a Liverpool mosque turns out to have been another Somali.

What do people expect from scum who lie their way into the west, saying they are asylum seekers.  Evan Ayaan Hirsi Ali lied her way into Holland saying that. 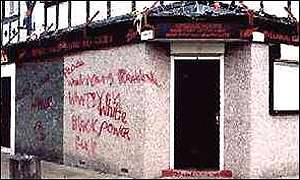 The racial tensions which led to the attack on 76-year-old World War II veteran Walter Chamberlain in Oldham this week have been simmering for three or four years.

With significant Pakistani and Bangladeshi populations, living in similar but separate run down and depressing inner-city enclaves, the mixed Oldham community has been chafing at its edges for some time.

Last year more than 600 racist incidents were logged by Oldham police and in 60% of them the victims were white.

More than 180 of the racial incidents were violent and the vast majority of those were attacks by Asian youths - usually in gangs of anything from six to 20 - on lone white males.

This year has seen the stabbing of a 20-year-old man in a subway, a 16-year-old boy whose face was stamped on after he was knocked over and the attack by three Asian youths on Mr Chamberlain as he walked to his home after watching a local amateur rugby league match.

In a belated response to the problem, a multi-agency team has been set up to look at ways of improving the lot of the Pakistani and Bangladeshi communities.

But it will all take a long time. Too long for local white residents, who feel under attack.

Areas of Oldham occupied by the Asian communities are considered to be no-go areas by many Oldham residents although, contrary to recent publicity, there are not - and never have been - "whites keep out" signs in any parts of the town.

Significantly, though, a recent anti-racist march, organised in response to a report that the National Front was planning a rally in Oldham, was advised to keep out of the Bangladeshi community by local leaders.

The reasons extended for the racial violence have been many and varied.

They range from poverty and unemployment, which leaves so many young Asian men with no prospects and narrow horizons, to a claim that the attacks are belated revenge for "Paki-bashing" inflicted on their families several generations ago.

More likely, however, is the view that these conflicts are territorial, that the youngsters in the Asian communities do not have their white peers' possessions and have only the territory where they live to defend.

And defend it from any white intrusion they certainly do.

At its core, however, it is criminally thuggish behaviour and looking for excuses or reasons to justify the level of violent attacks experienced in Oldham recently would be a very dangerous road to tread.

The violence is inspired and perpetrated by a tiny minority of Oldham's largely peace-loving Asian communities and is, in the short term, a matter of policing rather than social policy.

Remedies to social problems are essential, of course, but before those remedies can be put in place the violence has to be brought to an end.