Immigration and Demographics in the UK and Europe

Tags: Demographics, Europe, Immigration, UK, and, in, the

"In 1950, whites were 28 percent of world population and Africans 9 percent, a ratio of three-to-one. In 2060, the ratio will remain the same. But the colors will be reversed. People of African ancestry will be 25 percent of the world`s population. People of European descent will have fallen to 9.8 percent.

More arresting is that the white population is shrinking not only in relative but in absolute terms. Two hundred million white people, one in every six on earth—a number equal to the entire population of France, Britain, Holland and Germany—will vanish by 2060."

Currently the white population of the world is down to 16%.

Race—Stalking The Wild Taboo
Conclusion
A decade ago, the journalist and activist Samuel T. Francis wrote that race has become not only the ultimate unmentionable subject in polite conversation but the site of the most intense fear and anxiety. In other words, race is our era’s great taboo.
In the Victorian era, the Great Taboo was sex. Today, whatever the label we attach to our own age, the Great Taboo is race. The Victorians virtually denied that sex existed. Today, race is confidently said to be “merely a social construct,” a product of the imagination, and of none too healthy imaginations at that, rather than a reality of nature. The Victorians severely punished people who talked about sex, made jokes about sex, or wrote too openly and frankly about sex. Today, journalists, disc jockeys, leading sports figures, public officials, distinguished academics, and major political leaders who violate the racial taboos of our age are fired from their newspapers, networks, or radio stations, forced to resign their positions, condemned by their own colleagues, and subjected to “investigations” of their “backgrounds” and their “links” to other individuals and groups that have also violated the race taboo.[23]
The subject of race is avoided precisely because it is so powerful. Race is an indispensable source of identity for individuals around the world and one of the most consistent and revealing predictive mechanisms in the social sciences. Race’s impact on history, culture, science, technology, war, achievement, and the arts is only now coming to be fully understood. The mapping of the human genome will be remembered as but the first step in understanding the components of the human personality.
Put simply, we avoid thinking seriously about race at the cost of our future.

The analogy with the Victorian Christian attitude to sex is a good one - the stifling of discussion of it made the endemic child prostitution and abuse, and rape of maidservants etc prevalent in Victorian times, especially by the ruling and aristocratic elites, out of bounds for public discussion and problem solving, therefore they could continue with their vile exploitations.

On the subject of sex and religious and ethnic privilege - fast forward to Catholic Priests sexual abuse cover ups, and thence to Muslim grooming gang and Hollywood/political elites cover ups ; nothing has changed.

Discussion of race has become the new "Original Sin".

The Future Is Showing Up 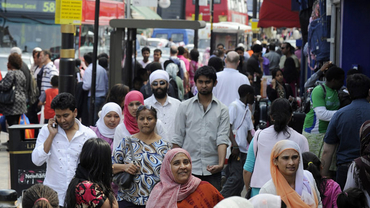 On the weekend edition of The Mark Steyn Show we discussed the jihad's first murder of a sitting member of the British Parliament and the first Islamic murder in an English church. The slaughter of David Amess has already faded into the usual woozy passive blur of candlelight vigils, but, before his death is completely memory-holed, I would like to note one particular distinction of Sir David:

He had five children.

This made him an unusual man for one of his generation (born 1952) and a remarkably enthusiastic father among today's Englishmen. As Fleet Street reported the day before Sir David's horrific stabbing, the fertility rate in England and Wales has fallen to the lowest on record - 1.58 "children per woman", as it is still quaintly formulated, so maybe all those pregnant men will stampede into the maternity wards and save the day. You need 2.1 children per woman to maintain a stable population, so when it's 1.58 you're heading for an England and Wales with fewer English and Welsh.

This is the same trend line seen in the United States, where fertility has also fallen to record lows - and in a year when both countries have been locked down with nothing to do but procreate, watch Netflix, or Instagram selfies of themselves watching Netflix. Evidently, procreation comes a very distant third. As The Times (of London) reports:

The trends towards later motherhood and having a smaller family may also have been accelerated by financial uncertainty caused by the Covid pandemic, according to the British Pregnancy Advisory Service (BPAS).

Could be. Or it could be that increasing numbers of western populations are simply checking out of the kid business entirely. It's almost as if, for all the joys of the multiculti utopia, they have no faith in the future, or at any rate zero interest in it.

Fifteen years ago I wrote a bestselling book about demography, which is actually pretty tricky to do. And so to increase its chances of going gangbusters at the mall I tried to come up with pithy lines such as:

The future belongs to those who show up.

If you have a country with great infrastructure, handsome buildings and extravagant emporia, it would be unreasonable to expect it just to empty out - any more than a stately home is going to lie abandoned for long just because the last in the line has expired on his drug stash. So, at the Channel ports as at the Rio Grande, the future is showing up. Thus, while the overall fertility rate in England and Wales is going down, the fertility rate of non-UK mothers is going up:

While fertility rates have continually fallen, the actual population of Britain has continued to increase, with mass migration accounting for 'about 90 per cent of population growth between 2017 and 2019.'

For anyone with even a residual memory of Britain from the day before yesterday - or even anyone who's watched a British movie from, say, the 1950s - the specifics are impressive. From the Office of National Statistics:

Slough [next door to Windsor Castle] 64.8 per cent;

Barking and Dagenham 68.2 per cent;

Kensington and Chelsea 69.9 per cent;

Ealing [as in those quintessentially English 1950s "Ealing comedies"] 70.9 per cent;

Harrow [where Winston Churchill went to school] 74.8 per cent;

Where are all these "non-UK" mothers born? Don't worry, they're not all Somali. The Number One country of origin is Pakistan - legacy of empire and all that, so a lot of vibrant diverse first-cousin marriage in West Yorkshire.

The Number Two country of origin is Romania. Not all Romanian mothers come here voluntarily:

Around three quarters of women trafficked to the UK come from Romania and the majority are sold into the sex trade.

Non-UK mothers accounted for 29.3 per cent of all births in England and Wales - which means the fertility rate of ethnic Anglo-Celts is not 1.58 but something closer to 1.3 births per woman, which is what demographers call lowest-low fertility from which no society known to human history has ever recovered.

The rate of immigration into Britain, Canada and America is beyond the powers of "assimilation", even if our societies were minded to assimilate, rather than denigrating the host culture by introducing (under a government of pseudo-conservative wankers) such novel concepts as the racism of mathematics. But, even without such over-egging of the pudding, on UK and other western rates of immigration, the "host community" does not assimilate the incomers, but vice-versa, as is happening in all the English cities listed above.

In Mitteleuropa, governments are energetically pro-family and opposed to mass unskilled immigration, noting crudely that the easiest way not to have a lot of Muslim terrorist stabbings is not to have a lot of Muslims. Even in France, Eric Zemmour, who may well be in next year's presidential run-off against Macron, speaks of a "demographic tsunami" - and God bless him for doing so, because it is not seemly for great nations to exit the stage of history without at least acknowledging the truth.

In the ever more stupid and trivial politics of the English-speaking world, that kind of talk remains strictly buried in what Tony Blair calls "the subterranean conversation" - save for a dwindling number of "sayers of the unsayable". Even the obsession with "wokeness" and "cancel culture" misses the central point: the educated white upper-middle-class leading the charge against statues and history and all the rest have (consciously or otherwise) grasped that it's over and, like canny aristocrats in revolutionary France or Tariq Aziz in Saddam's Iraq, are simply negotiating a place for themselves in the new order.

At the start of the Great War, Rupert Brooke wrote:

If I should die, think only this of me:
That there's some corner of a foreign field
That is for ever England. There shall be
In that rich earth a richer dust concealed;
A dust whom England bore, shaped, made aware,
Gave, once, her flowers to love, her ways to roam;
A body of England's, breathing English air,
Washed by the rivers, blest by suns of home.

But not when the foreign field is England itself.