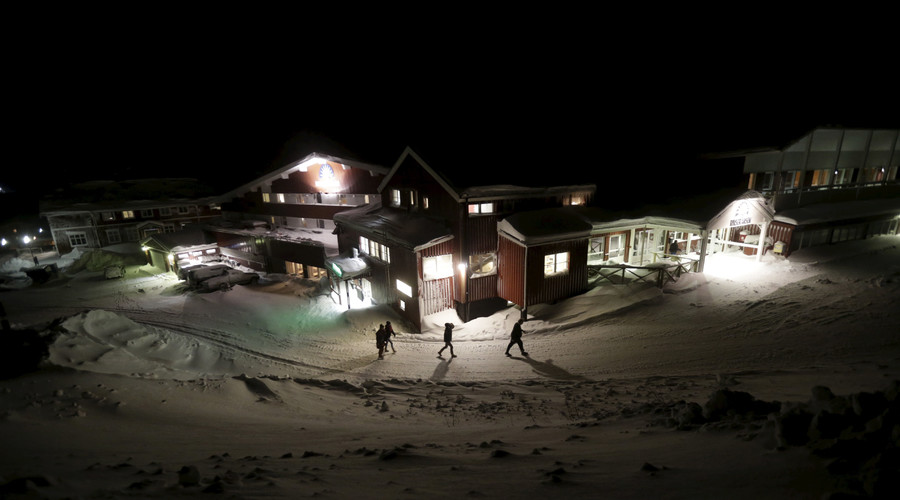 © Ints Kalnins / Reuters
72
A row at an arrival center for asylum seekers in Sweden has left two men injured and another being held by police on suspicion of attempted manslaughter. However, officers are not entirely sure what caused the fight because of the language barrier.

The two men were attacked with a knife-like object following an argument that took place at the Arena Hotel in Halmstad, southern Sweden.

According to the police, the injuries the pair sustained were not serious. Officers believe that two different factions clashed at the center, although police found it difficult to question the witnesses due to language problems.

"It's a bit difficult because they don't speak English or any other language but their own," police control room officer Johan Johansson told the Aftonbladet newspaper.

In 2015 Sweden welcomed around 163,000 asylum seekers, but numbers dropped in the last few weeks of the year after border checks were re-imposed following warnings of accommodation shortages.

The Arena Hotel has previously been in the news for violent outbreaks that were also linked to overcrowding.

The Swedish Migration Board reported that by August 2015 there were as many violent breakouts at asylum accommodation in that year as throughout the whole of 2014. Other countries such as Germany have also seen instances of violence in refugee centers as a result of overcrowding, even though there is a much faster track record of integrating asylum seekers into society there.

© Johan Nilsson / Reuters
585211
Some 60 asylum seekers have taken part in a massive fight at a refugee center in the Swedish town of Brannberg. Staff at the center were forced to escape the premises, local police said.

The ruckus started early on Friday morning, NSD media reported. Fifteen people were apparently the instigators of the brawl, which saw dishes being thrown around the premises.

"We have information about the injured," Provincial Police Duty Officer Thomas Shäufele told NSD. He added that authorities will have to use interpreters help to find out why the fracas erupted.

The staff at the accommodation center called the police and fled the building. At the moment there is a sizeable police presence at the center with patrols ongoing.

It is not the first time a fight has broken out at this refugee camp. Last month there was a similar explosion of violence.

BLOOD smeared across floors and splattered up walls, these shocking pictures reveal the horrifying last moments of a Swedish social worker murdered in a “frenzied attack” in a CHILD asylum centre. Alexandra Mezher, 22, left a trail of blood as she desperately tried to pull herself to safety and begged for her life.

The graduate bled to death from a severed artery in her thigh after she was stabbed repeatedly in the vicious attack.

Asylum seeker Youssaf Khaliif Nuur, who claimed to be a minor in order to stay in the children’s centre, has been charged with Miss Mezher’s murder.


The Ethiopian, who is at least 21 years old, claims he can’t remember the incident which took place on January 25.

The gruesome pictures reveal how Miss Mezher desperately fought for her life after being stabbed as she tried to break up a fight before two young migrants she was caring for.

Her trail of blood shows for the first time how the social worker tried to flee from the brutal attack, managing to crawl from the kitchen where she was stabbed, along the corridor and into a nearby bedroom.

It was here, lying in a pool of blood among white stained sheets, that Miss Mezher lost her life. The 22-year-old desperately tried to crawl to safety, leaving a trail of blood An Ethiopian migrant has been arrested on suspicion of murder

The young man has shown extreme ruthlessness and harshness

Witnesses told police Miss Mezher desperately pled for her life, screaming “No, no, no Youssef” at least 10 times as he stabbed her.

Miss Mezher’s brutal murder in the centre for unaccompanied child migrants in Mölndal sent shockwaves across Sweden and Europe.

Prosecutor Linda Wiking said: “The young man has shown extreme ruthlessness and harshness which caused the death of Alexandra Mezher.”

The suspect claimed he was just 15 years old to gain a spot at the home for unaccompanied migrants.

But prosecutors now say Nuur is at least 21 - if not older - meaning he should not have been at the centre for 14 to 17-year-olds.

One of the other residents tried to protect Miss Mezher but was attacked himself before more boys arrive to help.

But it was already too late for the young woman who bled to death before the emergency services arrived. A report by prosecutors said: “Just a few seconds later more boys came in to the kitchen and overpowered the man with the knife.”

“Alexandra then manages to get away from the scene. A few minutes later they make a distress call to the police.”

Miss Mezher would have needed urgent treatment within minutes for any chance of serval, according to the report.

The young woman’s mother has now revealed her daughter knew she was in danger at her workplace. Chiméne Mezher, 42, told police: She got a call from her job saying that someone had taken a knife. She sat on the sofa, but got up and went into the bedroom and talked.

“‘I do not think she wanted me to know she did not want me to worry worried. It was the 24th, she sat and calmly painted her nails. She knew how she would handle it.”

Mrs Mezher, a mother-of-four who moved from Lebanon 25 years ago, said her daughter didn’t have a chance fighting off “big powerful guys” claiming to be minors in the child asylum seeker centre.