Why are sex attacks on the rise in Tahrir Square? - BBC

Why are sex attacks on the rise in Tahrir Square? 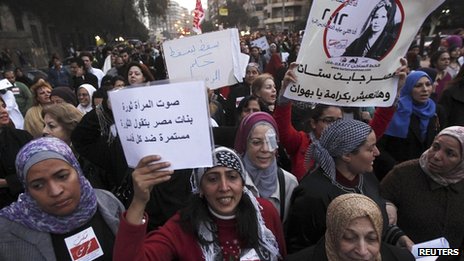 The testimony of women assaulted in Tahrir Square in recent weeks is shocking.

One report documented by an NGO concerns a woman whose genitals were lacerated using a bladed weapon during another assault.

On the internet, you can even see mobile phone footage of women in the square during demonstrations suddenly being surrounded by dozens of men, and carried away as they are groped and assaulted.

"People who pretended to help were actually harassing me more," says Shorouk al Attar, who was seriously assaulted with her sister close to the square during a protest last year.

"Everyone was holding me, pretending to take me out of the crowd but actually they were harassing me," Shorouk told us.

"It was hard to differentiate between who was helping and who was harassing. I heard some people laughing."

Shorouk says that after the attack she became scared to go outside.

"I spent three or four days alone at home," she said. "I couldn't stop thinking about it and crying. I kept asking myself 'why did this happen to me?'"

'What do you expect?'

A shocking number of women are asking the same question. In a single day in January, 22 serious sexual assaults were reported in Tahrir Square.

There have been protests in Cairo calling for the attacks to stop. But it is an indication of how bad things are, and how some resent even the raising of the issue, that some people attending those demonstrations have themselves been attacked.

If you are here and you see a girl dressed in an indecent way, what are you going to do? You can't help it”

So who is carrying out the sexual assaults in Tahrir Square?

"If you are here and you see a girl dressed in an indecent way, what are you going to do? You can't help it."

So said one of a group of young Egyptian men, hanging around close to the square, when we asked about the increase in sexual assaults against women there.

"We are depressed, we can't find jobs and money, what do you expect?" says another of the youths, who was unsurprisingly reluctant to give his name.

Now, it appears, protest gatherings in Tahrir Square, the home of the country's revolution, have become the big draw for young Egyptian men and boys wanting to leer, harass and now to even carry out assaults.

The young men we spoke to admitted they went to the square to look at women, and though they did not admit to being involved in serious assaults, their manner suggested they saw no problem in harassing women.

They even found the issue of rape something of a joke. 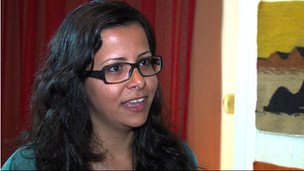 But is the recent increase in frequency in assaults more than just a social problem that has spiralled well out of control? Is there something even more sinister at play?

Some victims think so, including Shorouk al Attar, who was attacked as she attended a demonstration against President Mohammed Morsi and his Muslim Brotherhood.

"There's the theory that if you want to break a society you start with women because if you do this men will become afraid," she says. "I think it's organised. It's not by chance, like most people think."

The argument that the Muslim Brotherhood has organised the attacks to deter women from attending protests is one espoused by some other activists and women's support groups.

"Why else are the attacks concentrated where the demonstrations take place?" says Nevine Ebeid, from the New Woman Foundation, a group that documents attacks against women.

She does though acknowledge that solid proof is hard to come by, and that most of the evidence through testimony is circumstantial.

While the problem of sexual assaults in public gatherings began well before the revolution, Ms Ebeid feels that the political and social climate that has come with the rise of the Muslim Brotherhood has made things worse.

"Political Islam has meant there is a discourse opposed to women's rights," she says.

We are against any assault, especially sexual assaults”

"It does not believe that there is equality before the law and helps create a climate that encourages sexual harassment and sexual violence against women in Egypt."

It is a charge that has been strenuously denied by the Muslim Brotherhood.

"We are against any assault, especially sexual assaults," says Essam El Erian, the vice-chairman of the party's political wing. "Our religions, Christianity and Islam, prevent us from such."

Mr El Erian also reacted angrily to the theory the authorities were directly involved in orchestrating the attacks in Tahrir Square to stop people protesting, and instead blamed opposition groups for causing chaos.

"Tahrir Square has been captured by some of the revolutionaries," he says. "They are responsible for any case of sexual assault there."

For the last few months, opposition protestors have occupied Tahrir Square. It is closed to traffic and police have retreated beyond its boundaries.

Vigilante groups have started to operate to try to fill the security void and to protect women, but with limited success.

Even if police were present, respect for - and indeed fear of - the security forces has certainly diminished since the revolution and it is hard to imagine women would be safe from harassment in a large crowd here.

Whether or not the authorities are behind some of the attacks is hard to say, but there is little doubt the issue of sexual assault is not being taken as seriously as it should be; by politicians, security officials and throughout Egyptian society.

Women and men being raped in Tahrir Square.  Maybe more men than women.  The men are being taken off to army or police headquarters and raped there.

Organized groups are roaming Tahrir Square, raping women in order to scare half the population away from demonstrating, while men are being beaten and raped in military barracks and police stations: they might outnumber the female sexual assault victims, Toma told in her update on the situation of women two years after the revolution.

In Cairo, women activists and demonstrators are being targeted by civilians. ''They are sent by extremist groups led by the Salafist movement or by the (Muslim) Brotherhood'', explained Toma. ''They move in groups of five to six people, molesting not for sexual gratification, but for the pleasure of harming others''. Women told her ''they had knives held to their vaginas, while others were abducted, stripped and driven around the city, exposed to public shame,'' Toma recounted. This is a way to keep at least half the demonstrators away, she said. ''Women decide to leave Tahrir Square in fear of what has already happened to other women and to their friends.'' But the women of Tahrir ''are tough'', said the activist, who coordinated marches and meetings even before January 25.

''We women will remain,'' she told ANSAmed in an interview. The sexual assaults against male activists are something new, Toma went on. Abducted off the streets, they are dragged to police stations and military barracks, where they are sexually abused by men in uniform. Many of these male victims are among her patients, said Toma, who now works almost full time helping these rape victims overcome the trauma. ''I deal with post-traumatic situations. I've always worked with victims of sexual abuse and torture'', she explained, adding that many young activists are coming to her to tell her their stories. ''There is no official data'', but the violence has increased in the past two months, Toma added. While many victims refuse to come forward out of shame, she estimates there were 1,000 rapes last year. ''I work with my patients on how to channel the rage, sadness or shame, trying to reduce the desire for revenge'', said Toma, adding that many return to the street, only to be raped again. ''This has happened to many of my patients. Some of these kids got raped two, three times in a row. We want to stop this vicious circle''. Toma currently directs the Cairo Institute of Human Rights Studies, which is supported by the United Nations Democracy Fund and which educates activists on how to act on the political level. It also provides training on how to form pressure groups at the local level in cities outside Cairo. ''The revolution must move forward throughout the country, not just in Tahrir. We train them, we teach them how to denounce abuses and violations, how to contact NGOs and humanitarian organizations such as Human Rights Watch and Amnesty International. We have trained a large network of activists. It is made up of small cells, in which everyone knows one another and supports one another''.

Meanwhile, women activists are not giving up the streets: today's March 8 women's demonstration in Cairo has been called to protest the Muslim Brotherhood, Toma said.

They should send the fake professor Matthew Goodwin to Tahrir Square, since he finds it incomprehensible that some people don't welcome the Arab Spring and the beautiful 'Religion of Peace'.