The Complicity of the Gay Media

No reports of this story in the gay media.

This complicity of the gay media is obvious dating back to 2009.  At that point, The Guardian was discussing a survey by (muslims at Gallop), which showed that British muslims were 99.5% homophobic.  The major gay newspaper in Britain argued that the survey was "islamophobic".  Instead, they trumpeted some idiotic survey done by a gay muslim student in Britain, which claimed that most muslims in Britain would be happy to have a gay child.

I thought it was time we started to document the stories of the muslim genocide against gay people, and show that the gay media ignore this.

Here's a summary of the stories on pinknews.co.uk.

Nothing about gays being hanged in Iran.  And gaystarnews.com is basically the same.

Gay man attacked by muslims in Lille, who quote the koran whilst they beat him.

Incredible ... and incomprehensible.  I would say that those news outlets have been hijacked by Muslims, as with Shamnesty International, but it hardly seems likely in this case.

No sign of this story on pinknews.co.uk or gaystarnews.com.  Plenty of stories castigating christians on the front page of the latter, for far less serious things than killing people for being gay.

Peter Tatchell becomes patron of Tell Mama ... what a completely disgraceful sell-out (not that he had much to sell out on to begin with).

I'm often astonished at the hatred among gay people for Peter Tatchell. This is the kind of thing that shows why he is so widely despised by his own community. 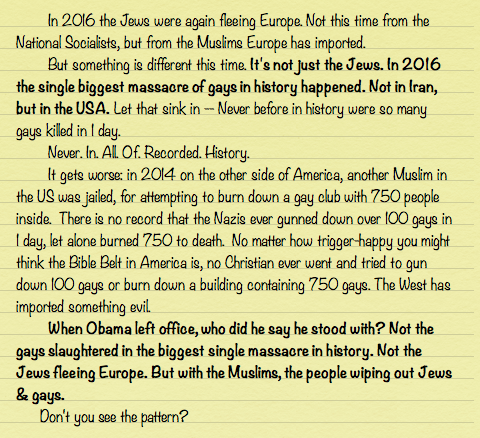 I thought I posted it here.

The young gay man in Finland has now been found guilty of hate speech for criticising Islam.

Read the comments to this piece. When Douglas Murray said after the Reading attacks that they were due to failure to deport immigrant criminals, the gay media attacked Murray and defended Islam.

Gay men, for the most part, have pretty much lost their place in the victim totem pole, especially if they're White. As awful as it sounds their race could've have also played a factor in to why these murders weren't covered (assuming they were White, I don't know much details). Yes, gay they were but if they were cis, White men, well I'm afraid they would too privileged and oppressive to be considered "real victims". If they were gay AND people of color and the attackers where White, then there would've been coverage followed by outrage, at least the phony, theatrical kind. Elite gaydom are so up their asses they're more concerned in playing nice with violent homophobes of color lest they be accused of privileg and racism for daring to state the bleeding obvious