The Islamic Destruction of Ctesiphon (Persia, 637)

This is how Ctesiphon Gate looked before Arab Muslim Invasion 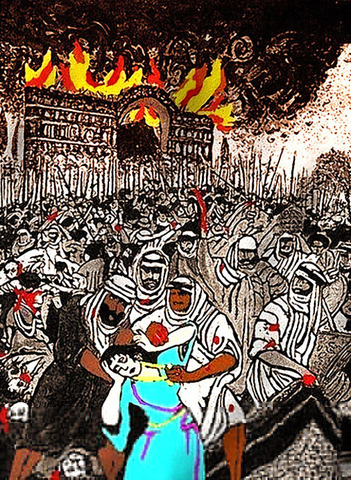 This is how Ctesiphon looks after the Arab Muslim Invasion Occupation Ctesiphon was the imperial capital of the Parthian Empire and the Sasanian Empire. It was one of the great cities of late ancient Mesopotamia. Its most conspicuous structure today is the great archway of Ctesiphon.

It was situated on the eastern bank of the Tigris across from where the Greek city of Seleucia stood and northeast of ancient Babylon. Today, the remains of the city lie in Baghdad Governorate, Iraq, approximately 35 km (22 mi) south of the city of Baghdad.

Ctesiphon was the largest city in the world from 570 AD, until its fall in 637 AD, during the Muslim conquests

Ctesiphon fell to the Muslims during the Islamic conquest of Persia in 637 under the military command of Sa'ad ibn Abi Waqqas during the caliphate of Umar. When the Arabs entered the city, the throne hall in Taq Kasra was briefly used as a mosque.

Ruins of Ctesiphon, The Ancient Capital of Sassanid Persian Empire, near Baghdad still exists. Before 638 AD, Ctesiphon used to be the wealthiest, most prestigious and the most glorious city in the world. Ctesiphon, to the envy of Rome, Egypt and Arabia, was the center of Culture in the civilized world.

Arab Savages murdered all the men, raped all the women, kidnapped young girls and sent them to Arabia as concubines (female slaves), and enslaved the young boys.

In 637 CE with occupation of Iranian capital, Ctesiphon, the Baharestan carpet was taken by the Arabs, cut into small fragments and divided among the victorious soldiers as booty.

The Baharestan carpet (Persian فرش بهارستان, meaning the spring carpet) was commissioned by Sasanian Shahanshah Khosrow Anūšakrūwān), which was made for the main audience hall of the Sasanian dynastic imperial Palace at Ctesiphon, in the province of Khvârvarân (now in Iraq).

The book burnings started, they practically burned all the books in the glorious world famous Persian Library of Ctesiphon. The Persian documented history, science, literature, poetry, music and scripture of centuries and millenniums were burned to ashes by Arabo-Muslims. The only book needed in Islam is Quran, so they burned everything else! The book burnings continued for days and weeks!

By 651 Ctesiphon was leveled and what had left was a pile of burning ashes. The largest city in the world was destroyed and wiped out of the map

Caliph Al-Mansur took much of the required material for the construction of Baghdad from the ruins of Ctesiphon. He also attempted to demolish the palace and reuse its bricks for his own palace, but he desisted only when the undertaking proved too vast.

If Islam achieves its aim of global domination, it will be as if Western civilisation, all of its achievements and all of our history had never happened. Islam remorselessly grinds everything non-Muslim into dust and oblivion.