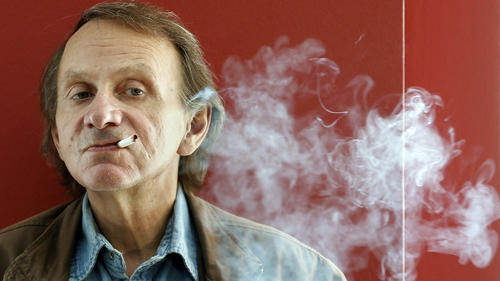 (Andreu Dalmau / EPA)   By DAVID NG
Michel Houellebecq play is pulled from Dubrovnik festival in Croatia over security concerns
'The Elementary Particles,' based on Houellebecq novel, is canceled at summer festival over security worries

A play from the controversial French writer Michel Houellebecq has been yanked from a prominent summer festival in Croatia, with officials citing security concerns arising from Houellebecq's writings about Islam.l

"The Elementary Particles," a new stage work adapted from Houellebecq's own 1998 novel, was set to play at the Dubrovnik Summer Festival in July. In announcing the season earlier this year, festival organizers said that the play would serve as the opening production of its roster of new theatrical productions.

But the current lineup published on the festival's official website contains no mention of the Houellebecq piece.

A spokeswoman for the festival confirmed by email that the play was canceled following a "risk analysis" carried out by the Croatian Security and Intelligence Agency. She said that, based on that analysis, the Croatian Ministry of Interior determined that the play would represent a security risk.

The festival "had no other option," said Karla Labas, the spokeswoman.

Houellebecq has generated controversy with his writings about Islam, especially with his recent novel "Submission," which was published earlier this year and imagines a Muslim-dominated France. Shortly after its publication, the office of the Charlie Hebdo satirical newspaper in Paris was attacked by armed terrorists, and 12 people died.

But Houellebecq's "The Elementary Particles" doesn't contain the author's incendiary views on Islam. The novel's plot follows the sexual lives of two half-brothers, Michel and Bruno, the former of whom is a biologist who is researching a potentially new race of human beings.

"We knew that the novel isn't about Islam in any way, but it's the question of whether those who required the assessment knew that," said Labas.

"The Elementary Particles" has previously been performed at the Festival d'Avignon in France in 2013 and the following year in Paris.

The 66th annual Dubrovnik Summer Festival is scheduled to commence July 10, and will feature a mix of classical music, dance and theatrical offerings.

This incident shows that the attitude to Islam should be more assertive, challenging and accusatory.

The Croatian Kuffar are now self-censoring due to the persistent dark threat of Muslim retaliation.  Therefore, all Muslims in Croatia should be accused of imposing this censorship.   When they say "This has nothing to do with mainstream Islam", they should be challenged to prove it hasn't, and required to give protection to this case of free speech.  Those that reject the charge should be challenged to ask the festival to re-instate the play, and offer a large Muslim crowd of demonstrators to give protection outside the performance.

Of course, the same should happen with the Charlie Hebdo case etc, but that in that case the restriction on speech is externally imposed, not internally imposed by self-censorship, so the case is even more obvious.

The assumption should be that from now on, Western societies must no longer criticise Islam, or indeed say anything about it at all.  But ALL Muslims in the West should be blamed for that censorship.  If any Muslims want to reject the charge, then they need to show that their stated intention is genuine, by doing something concrete to further it.  Of course they won't, because they know what will happen to them if they do: they too will receive the punishment in Sharia Law, for 'spreading mischief in the land'.

All the Muslim 'profession of benign intentions', is just their way of covering up for their 'atrocities and crimes'.

Freedom and human rights are not part of the vocabulary of Islam, or rather are defined differently. Insulting Islam is one of the things that most Muslims can agree is wrong.

"(except the fundamentalists, who I have a begrudging respect for)"- Yes I respect their honesty and conviction even though they are evil bastards. I am determined to be honest whatever it costs, and I am prepared to become an evil bastard, in my own right. I condemned any one that remains Muslim a long time ago.

Then we have the situation in Bosnia, Kosovo, Albania and Macedonia. Macedonia wants to become a member of the EU, but it is a country riddled with corruption and Muslim revolt.

This self- censorship is not just confined to Islam, it also includes all non-European immigration to Europe. Say nothing about it and pretend not to see that the native population is being replaced, speak out in favour of it.