Frederick Mackeson and a Muslim Assassin

A friend visited Canterbury Cathedral recently and sent this image. 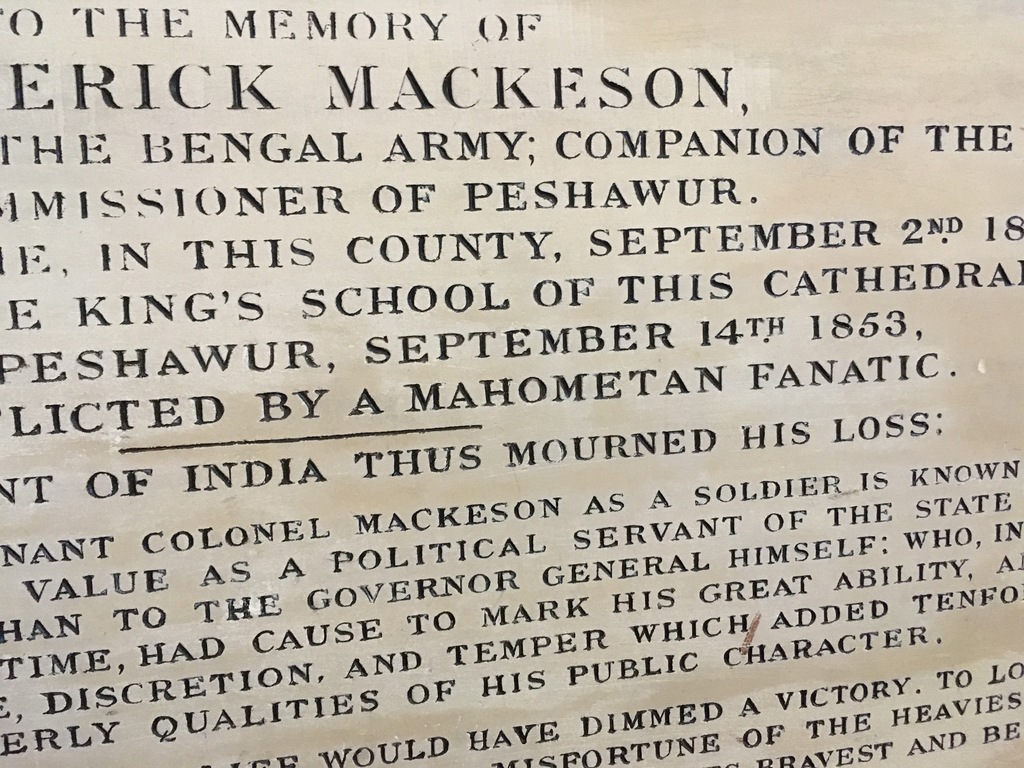 Below is the full text of the plague.  Some today would consider that the use of these words is clearly hate speech: ‘Mahometan Fanatic’ ‘foul assassin’.  And it needs to be removed at once, scrubbed clean from the wall and even our memories.  This sort of language is divisive and not conducive to community cohesion.

Since Victors write the history, if we do not win this war against Islam all this sort of history will be erased and even Canterbury Cathedral itself will be turned into a mosque or razed to the ground as an offense to Muslim sensitivities.

A monument to Frederick Mackeson depicts a scene and reads:

'To the memory of Frederick Mackeson, Lieutenant Colonel in the Bengal Army; Companion of the Bath: and Commissioner of Peshawur.

Was educated in the King's School of this Cathedral, and died at Peshawur, September 14th 1853, of a wound inflicted by a Mahometan Fanatic.

The government of India thus mourned his loss: "The reputation of Lieutenant Colonel Mackeson as a soldier is known to and honoured by all: his value as a political servant of the state is known to none better than to the Governor General himself: who in a difficult and eventful time, had cause to mark his great ability, and the admirable prudence, discretion, and temper which added tenfold value to the high soldierly qualities of his public character.

The loss of Colonel Mackeson's life would have dimmed a victory, to lose him thus by the hand of a foul assassin, is a misfortune of the heaviest gloom for the government, which counted him amongst its bravest and best."

This monument was erected to his memory by his friends and admirers in India.'

More about this brave soldier here:

A Muslim assassin got close enough to him to stab him in the chest, after distracting him with a petition and pleading with him.  It reminds me of the tactic that Roshonara Choudhry used to attack Stephen Timms, MP, and almost murder him.

Peshawar is never far from the news today. There was a jihadist martyrdom attack on All Saints Catholic Church in September 2013. This attack (87 killed) received little media attention as it took place at the same time as the Westgate Mall jihadist attack in Nairobi (67 killed). More significant was the Peshawar school massacre in December 2014 (132 children killed). What made this attack significant was the way it was later justified: The jihadists killed the children to spare them the temptations that would come their way when they grew into adulthood in this sinful world. They killed them because they were innocent. They killed them so they could go straight to paradise. It is likely we will hear more from Peshawar.