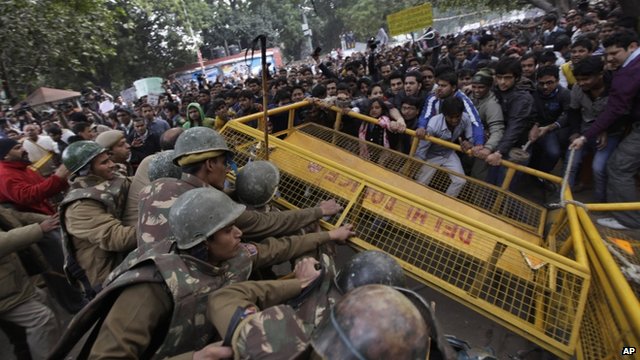 Andrew North reports for Newsnight on how many Indian politicians are accused of rape, murder and other serious crimes.

Manoj Kumar Paras is meeting constituents in a covered yard outside his home, many desperate for his help.

He is a minister in the state government in India's Uttar Pradesh state.

Mr Paras is also charged with taking part in the gang-rape of a local woman.

The Indian government has promised speedier justice for crimes against women, shaken by protests over the fatal gang rape of a Delhi student.

Five of the accused are already on trial in a hastily-established fast-track court. A sixth accused, who is a minor, is being tried in a juvenile court.

But six years since Mr Paras was first charged, his case has neither been prosecuted nor dismissed.

The outcry over the Delhi gang rape has prompted a wider backlash against the old order, and the number of Indian politicians allowed to remain in office while facing serious charges is under the spotlight again.

According to the Association for Democratic Reforms (ADR), a Delhi-based campaign group, a third of India's 4,835 elected representatives have declared criminal charges against them - many of them face serious cases like murder, rape and kidnapping.

The figures are based on information politicians themselves provide in their mandatory pre-election declarations.

Uttar Pradesh has more alleged criminals in its administration than any other state: Mr Paras is among 29 of 58 ministers charged with some kind of crime.

He shows us the charge sheet drawn up by police, called FIR (first information report) in India.

But the minister disputes whether he has been charged.

"Maybe there is a complaint in a court or a police station," he says. "Maybe after an investigation, it might be found to be untrue."

On his election declaration, he has admitted to other past attempted murder charges, as well as kidnapping and robbery.

So far, there has been no progress in any of these cases.

Mr Paras says everyone in his Nagina constituency knows about his rape charge, insisting that it is "a conspiracy" fabricated by rivals.

But it can be rare for women to press charges of rape - especially in rural areas like Nagina where tradition and caste govern life.

Many do not even report an assault because of the fear they will be ostracised by their family and community.

However serious the charge, as long as a politician is not convicted, he or she can stay in office under Indian law.

They are helped by the overloaded justice system, where even minor cases can drag out.

But ADR's national coordinator Anil Bairwal says politicians can also use their position to delay their cases "not just for years, but decades".

When Uttar Pradesh's Chief Minister Akhilesh Yadav took power last year, he pledged not to appoint "tainted" officials to his government. His office would not agree to an interview, despite repeated requests.

Other parties, including the Congress, have made similar pledges.

Parties need them to deliver votes, especially where religion and caste play such a key role.

Mr Ali has a proven track record at delivering votes from his fellow Muslims in his constituency, winning four elections in a row.

Mr Paras won by nearly 30,000 votes last year in Nagina, with a particular appeal among members of his Dalits or untouchable caste.

With a general election due in the next year, "India's democracy is in danger", warns Gopal Subramaniam, a former solicitor general and one of the authors of the Verma Commission report into the Delhi gang rape case.

Their report called on all politicians facing serious charges to resign - coming into line with many other democracies.

But Mr Paras rejects the idea of standing down: "Just charging someone is not enough, you have to wait until you are convicted."

Oddly enough, the two they highlight are both Muslim, and there seems to be some pork barrels around their election wins.