On the 27th of July 1946, Mohammad Ali Jinnah gave a call to the Muslims to observe August 16, 1946 as “Direct Action Day”. Jinnah declared: “The Muslims of India wouldn’t rest contented with any thing less than the immediate establishment of independent and fully sovereign State of Pakistan. ... Now the time has come for the Muslim Nation to resort to Direct action. ... We have taken a most historic decision. Never before in the whole life history of the Muslim League did we do anything except by constitutional methods. Today we have said good-bye to constitutional methods. Throughout the painful negotiations the two parties with whom we bargain held a pistol at us — one with power and machine-guns behind it and the other with non-co-operation and the threat to launch mass civil disobedience. The situation must be met. We also have a pistol.’

“This Council calls upon the Muslim nation to stand to a man being their sole representative organisation, the All-India Muslim League, and be ready for every sacrifice.”

“This Council directs the Working Committee to prepare forthwith a programme of direct action to carry out the policy initiated above and to organize the Muslims for the coming struggle to be launched as and when necessary.”

The Muslim League was now definitely and irrevocably on the war-path. Its war was declared against the Hindus and the Sikhs, against whose opposition it was to establish its independent State of Pakistan. The speeches made by Mr. Jinnah and other Muslim League leaders were provocative in the extreme, and such as to give the Muslims not only broad hints, but clear instigation to attack non-Muslims and by this method of warfare to bring them to their knees if possible, and to force them into the acceptance of Pakistan.

Some of the things said by Mr. Jinnah on this occasion are these:

Again, referring to the new threat and programme of Direct Action, he said,

“To-day we have forged a pistol and are in a position to use it.”

Again, talking of the threat of Direct Action he said:

“We mean every word of it. We do not believe in equivocation.”

Then he quoted the Persian Poet, Firdausi, in these words:

“If you seek peace, we do not want War. But if you want War, we will accept it unhesitatingly.”

Still more provocative speeches, if possible, were made by other Muslim League leaders on this occasion. Nawabzada Liaqat Ali Khan, now Prime Minister of the Dominion of Pakistan, elucidating the implications of the Direct Action threat, said:

Raja Ghanzafar Ali Khan, lately also member of the Pakistan Government, speaking to a huge Muslim gathering at Lahore on the 31st August, 1946 outlined the Muslim League Direct Action as the economic political and social boycott of the Congress and ‘the following of a scorched earth policy.’

Mr. Jinnah held out the threat that Direct Action by Muslims would lead to one hundred times more destruction than the Direct Action of the Hindus (meaning the Congress).

Earlier ill the Convention of Muslim Legislators held in Delhi in April 1946, equally provocative and instigatory things had been said:

“Any attempt to prevent the establishment of Pakistan would lead to bloodshed.”

“The Punjab Muslims do not believe in non-violence and should not, therefore, be given cause for grievance because once the Muslim lion is infuriated it would become difficult to subdue him.”

“I tell you this much that if we find that we have to fight Great Britain for placing us under one Central Hindu Raj, then the havoc which Muslims will plays will put to shame what Jenghez and Halaku Khan did.”

Sir Ghulam Hussain Hadayatullah, at that time Premier of Sind and later under Pakistan, Governor of the same Province, said:

“The Congress should understand that unless they make friends with us and accede to our demands there will he no peace in India.” Troubles started on the morning of the 16 August. Even before 10 o'clock Police Headquarters at Lalbazar had reported that there was excitement throughout the city, that shops were being forced to close, and that there were many reports of brawls, stabbing and throwing of stones and brickbats. These were mainly concentrated in the North-central parts of the city like Rajabazar, Kelabagan, College Street, Harrison Road, Colootolla and Burrabazar. In these areas the Hindus were in a majority and were also in a superior and powerful economic position.

The trouble had assumed the communal character which it was to retain throughout The League's rally began at Ochterloney Monument at 12o'clock exactly. The gathering was considered as the 'largest ever Muslim assembly in Bengal' at that time.

The meeting began around 2 pm though processions of Muslims from all parts of Calcutta had started assembling since the midday prayers. A large number of the participants were reported to have been armed with iron bars and lathis (bamboo sticks). The numbers attending were estimated by a Central Intelligence Officer's reporter (a Hindu) at 30,000 and by a Special Branch Inspector of Calcutta Police (a Muslim) at 500,000. The latter figure is impossibly high and the (Muslim) Star of India reporter put it at about 100,000.

The main speakers were Khawaja Nazimuddin and Chief Minister Suhrawardy. Nazimuddin in his speech preached peacefulness and restraint but rather spoilt the effect by asserting that till 11 o'clock that morning all the injured persons were Muslims, and the Muslim community had only retaliated in self-defence.

The Special Branch of Calcutta Police had sent only one Urdu shorthand reporter to the meeting, with the result that no transcript of the Chief Minister's speech is available. But the Central Intelligence Officer and a reporter, who Frederick Burrows believed was reliable, deputed by the military authorities agree on one statement (not reported at all by the Calcutta Police). The version in the former's report was—"He [the Chief Minister] had seen to police and military arrangements who would not interfere". The version of the latter's was—"He had been able to restrain the military and the police".

However, the police did not receive any specific order to "hold back". So, whatever Suhrawardy may have meant to convey by this, the impression of such a statement on a largely uneducated audience is construed by some to be an open invitation to disorder indeed, many of the listeners are reported to have started attacking Hindus and looting Hindu shops as soon as they left the meeting.

Subsequently, there were reports of lorries (trucks) that came down Harrison Road in Calcutta, carrying Muslim men armed with brickbats and bottles as weapons and attacking Hindu-owned shops.

Hindus and Sikhs were just as fierce as the Muslims in the beginning. Parties of one community would lie in wait, and as soon as they caught one of the other community, they would cut him to pieces.

Near military installations, static guards, forces specially trained to protect such installation, took over from police guards and a party of troops under Major Littleboy, the Assistant Provost-Marshal of Calcutta, did valuable work in the rescue operation for displaced and needy persons. Outside the military areas, the situation worsened hourly. Buses and taxis were charging about loaded with Sikhs and Hindus armed with swords, iron bars and firearms.

On 17 August, Syed Abdullah Farooqui, the President of Garden Reach Textile Workers' Union, along with Elian Mistry, a Muslim hooligan, led a Muslim mob into the mill compound of Kesoram Cotton Mills in the Lichubagan area of Metiabruz. The mill workers, among whom were a substantial number of Oriyas, used to stay in the mill compound itself. The mob began loot and wholesale massacre of the Hindu workers at the instigation of Farooqui. 500 to 800 Hindus, including 300 Oriyas were killed in the massacre.

On 25 August, four survivors lodged a complaint at the Metiabruz police station against Farooqui.[26] Biswanath Das, a Minister in the Government of Orissa, visited Lichubagan to investigate into the killings of the Oriya laborers of Kesoram Cotton Mills. Some sources put the death toll at 7,000–10,000.[2] Authors have stated that most of the victims were Hindus. 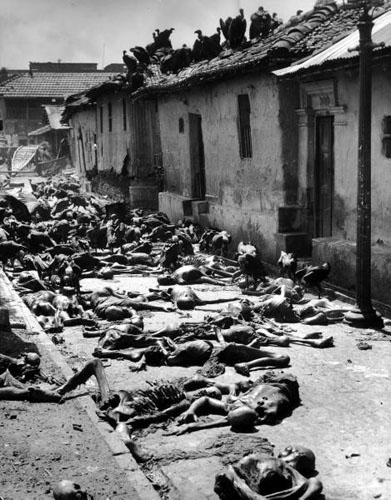 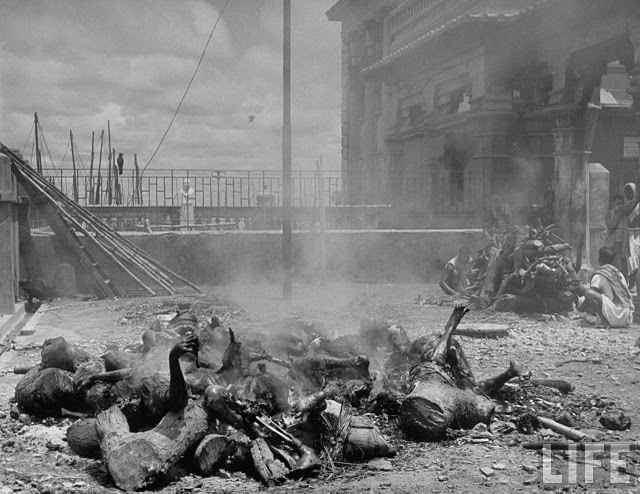 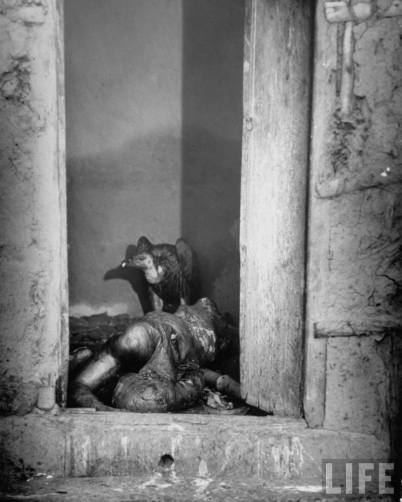 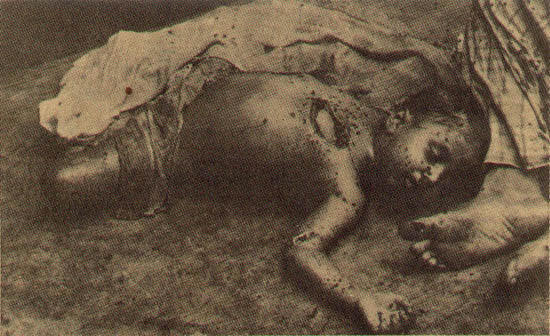 Even the young are slaughtered