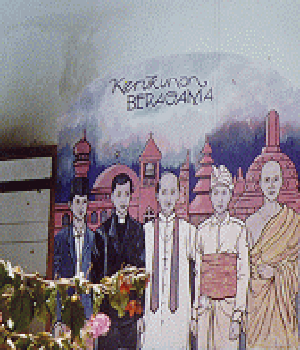 Above is a detail from a photo showing a mural on a wall of the Katolik Santa Maria Preschool and Convent, Situbondo, East Java depicting the five state recognised religions

Below is the complete photo

Another view of the school

10:00 AM
Court proceedings at the Situbondo Court House on General Sudirman Avenue concerning an offense against Islam by a Mr. Saleh (himself a Moslem). The prosecutor sought an 8 year jail time. The judge handed a 5 year prison sentence. The lighter sentence caused a mass hysteria of about 3,000 Muslims.

10:30 AM
The Situbondo Court House was set aflame with gasoline obtained from a nearby service station. Passing and parked cars and motorcycles were also set aflame. A convoy of trucks with approximately 2,000 men arrived from the westerly direction.

10:30 - 11:00 The Mount Zion Bethel Church across the street from the service station was set aflame. Concrete walls were demolished, all church equipment and paraphernalia were burnt to ashes.

Blasphemous graffiti were painted on nearby walls: "Jesus s..t, Jesus s...tty saviour, traitor, Mother Mary communist, A robber of the people, Plunderer, We muslims will be outraged if another church is rebuilt here".

11:00 AM
Every church in the city was set aflame at relatively the same time:

These destruction were executed by the same mob who burned down the court house. They split into two groups: One advancing along A. Yani Avenue, and another in the direction of W.R. Supratman Avenue and Orchid Street (Jalan Anggrek). Masses came in trucks and motorcycles were also observed. They were about to burn the Protestant Church of West Indonesia (GPIB - Gereja Protestan Indonesia Barat) on Sudirman Avenue, but were persuaded by policemen not to do that since the Police Department was located next door. Nevertheless, they forced their way into the church building, carying anything they could find, including pews, Bibles and worship paraphernalia, out into the street, and burned them, while screaming and yelling.

Many town officials witnessed the destruction, but folded their hands and remained as spectators. Armed forces were used to only protect residential areas. But did nothing to prevent the destruction of churches and Christian schools. The masses came equipped with steel pipes, mallets, and hoes. Some were seen carrying sickles (a sharp semicircular blade attached to a short handle, normally used for cutting grain, but may also be used to decapitate an enemy).

Assessable damages were as follows:

Tragedy occurred at the "Pantecostal Church of Surabaya" (GPPS - Gereja Pantekosta Pusat Surabaya) on Basuki Rachmad Avenue. The mob, carrying steel pipes, sickles, hoes, hammers and mallets surrounded the church building and the attached parsonage. At that time, seven people were inside the parsonage: Pastor Ishak Kristian (70), Mrs. Ribka Lena Kristian (67), Elizabeth Kristian (the pastor's daughter who was planning to wed on December 24th), Rita (20, a church employee), Nova Samuel (15, the pastor's niece), Didit Yohanes and Andreas. They were all trapped in the flames. Didit and Andi escaped through the roof. Both were injured from their fall. Pastor Ishak was found scorched in his bedroom. Nova's body in the master bathroom; the other three scorched in the kitchen.

While fire continued to engulf the church buildings, the mob proceeded to destroy stores belonging to Chinese merchants. They were persuaded not to touch a bank (BCA - Bank Central Asia), where many Moslem imams (priests) do their banking. Several Moslem imams were seen guarding the bank building.

2:00 PM
The "Sweetheart Orphanage" (Panti Asuhan Buah Hati), a 3-month old orphanage built by the Pantecostal Church of Surabaya (GPPS) to house poor abandoned children, was burnt to the ground. All paraphernalia were destroyed. The concrete walls were hammered down.

At the village of Ranurejo - District of Banyuputih (approximately 10 kilometers from Asembagus):
The Christian Church of East Java (GKJW Ranurejo), it's daughter church in Pepanthan Sidodadi, and the St. Joseph Catholic Church were set aflame.

The mob went completely wild at the St. Joseph Catholic Church. They came on 2 trucks, 10 motorcycles and 1 pickup truck. Hundreds of young men wearing gray pants and tee shirts. The procession was led by a policeman on a motorcycle. A third truck came from another direction to join them. They were screaming and yelling: "Long live Islam!" When they arrived in front of the church, an older man picked up gravel and sand, and threw them in the direction of the church. The masses went wild. The young men stepped out from the trucks; some threw rocks at the church windows, some went inside the church, destroying anything they could find. Movable objects were piled up in front of the church. Gasoline was poured on top of them, and fire was ignited. The flame was so high, reaching and burning the roof of the church. They warned spectators not to try to extinguish the flame, or else be killed.

Local authorities, town council members and the police force watched all that happened without doing anything. The mob knew they were there, but ignored them. They were all yelling "Long live Islam!".

After they were satisfied with the destruction there, they proceeded to the Christian Church of East Java (GKJW Ranurejo), approximately 400 meters from the Catholic Church. There they set the church and it's parsonage aflame. The minister's wife and a 5 year old child were frozen in fear. They had to be dragged out by two young men (Ating and Eko) and brought to safety at the house of a Mr. Supranowo.

After they were satisfied with the destruction there, they proceeded to the Christian Church of East Java - Pepanthan Sidodadi, a daughter church of the previous one.

4:30 - 5:00 PM
Destruction of the Christian Church of East Java - Pepanthan Sidodadi, a 9 month old building, funded with sacrificial gifts from very poor members, whose homes are constructed of bamboo sticks, and dirt floor.

Afterwards, the mob proceeded to Wonorejo (approximately 26 kilometers from Ranurejo, a coastal village).

5:30 - 6:00 PM
The "Pantecostal Church of Indonesia" (GPDI), the Christian Church of East Java (GKJW), the Bethel Church, and a Catholic Chapel in Wonorejo were burnt. One of the buildings was only one month old. Many frightened residents ran into a nearby forest to hide.

4:00 PM
A Catholic Church (100 meters in the direction of Besuki) - burnt.
A "Pantecostal Church of Indonesia" (GPDI) - burnt.
Stores, (one of them the only jeweler in town), looted and destroyed.
A statue of Jesus was taken out from one of the homes and burnt.

The total number of buildings destroyed: 30, out of which 21 churches and schools were burnt, 9 were demolished.