It’s such a shame that those eager to limit freedom of speech never do us the courtesy of starting with their own stupidity. I’m always amazed when people who enjoy a free, western democracy pay lip service to theocracy. It’s especially concerning when such a person happens to be a Chief Inspector for Greater Manchester Police in the UK.

Of course, any thinking person knows that’s exactly what freedom of speech means. Speech can never truly be ‘free’ unless it includes the right to say things some people may not enjoy hearing. Indeed, the right to ‘blaspheme’, mock sacred cows and challenge taboos is what has led to progress in any civil society. The price for this has always been ‘offense’. And the great thing about ‘offense’ is that it’s cheap.

By Umer Khan’s understanding, we are not free to offend people who endorse FGM, denigrate gay people as ‘sinners’ or think the appropriate punishment for adultery is death by stoning. It’s their ‘culture’, ‘tradition’ and ‘religion’ after all. Am I not free to tell a believer that some verses of the old testament are morally repugnant, lest they take offense?

It’s worth reminding Chief Inspector Khan that section 5 of the public order offence wasreformed in 2013 to remove the criminalisation of “Insulting words or behaviour”. It is also worth reminding the Chief Inspector that the EU Guidelines  clearly state that religious freedom ‘does not include the right to have a religion or a belief that is free from criticism or ridicule’.

With this in mind, perhaps Chief Inspector Khan could explain to the public and to his superiors why he is promoting sentiment that directly contradicts the law? I would submit that upholding the letter of the law is the bare minimum that should be expected from him.

Stephen Knight is host of The #GSPodcast. You can listen to The Godless Spellchecker Podcast here, and support it by becoming a patron here.

The Khan tries to use Auschwitz as a defence - then deletes it. 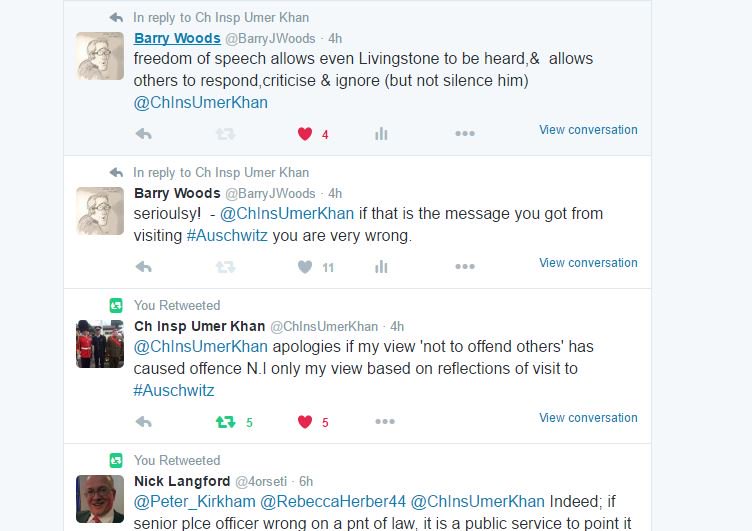 The Manchester police chief should be dismissed. But don't expect a witch hunt by SJWs and the media, anytime soon.

He is using the typical authorised Islamic technique of deceit to confuse the issue.  He is trying to conflate Holocaust denial with challenging ideologies.

Holocaust denial is criminalised by some countries, because the holocaust was an simple fact, documented by major world organisations, and to deny it has serious effects on the rest of human society.  Denial of the moon landings is also a major disinformation, but its effects aren't so serious, so it is not banned.

Criticism of ideologies is denied by the fascist ones.  So criticism of islam is banned by Islam.  The Chief Inspector is trying to enforce protection of his fascist ideology from criticism.

The two cannot be compared at all.  In fact, his very use of deceit to protect his fascist views, shows exactly how important it is to uphold free speech against this kind of attack.

What part of this do the Guardian shit heads not get?  You have a Muslim Khan elected mayor of London, with a long track record of protecting terrorists.  You have a Muslim Khan in charge of Manchester police, saying that Free Speech should be stopped - in contradiction to the law which he is supposed to be enforcing.  Don't get me started on no conviction for 100,000 FGM performed, no uproar over 100,000 groomed English girls.   When are their feeble brains going to run of excuses for their measly cowardice in facing issues like these?

When are they going to twig that in any conflict between a bland, non-allegiance collection of people, and a group with a strong in-group preference, the latter will always win and take control?

Breitbart's reporting on the issue ; http://www.breitbart.com/london/2016/05/09/muslim-police-chief-says...

Obviously, if you give a muslim a position of responsibility and power he will misuse it, because his first loyalty will always be to Islam, its laws and to his fellow muslims. We, our laws and traditions mean nothing to him.