Muslim Parasitism and Unemployment in the UK

[*Note. We encounter endless arguments by salafi libtards claiming there is no verification to these statistics although they are clearly verified under the links in Related]

Modest numerical calculations based on government statistics, wikileaks and media reports reveal that the British government spend a minimum £13+ billion a year from tax revenues on unproductive Muslims. Britain is expected to have more Muslims than all of Kuwait in less than two decades. While the government is trying to create £12 billion in annual cuts by targeting the handicapped, elderly, and poor amongst it’s own citizens, they have ignored a group that is highly overrepresented above anyone else in welfare exploitation. Sweden appears to be gripped in a similar situation with the country drowning in Muslim related expenses.

The Daily Telegraph reported in 2012 that 75% of all Muslim women are unemployed while 50% of all Muslim men are unemployed (67.5% total) – a staggering 350% rise from 13% for men and 18% for women in 2004. Muslims are also on sick leave more than anyone else, with 2001 figures revealing that 24% of females and 21% of males claim disability. Muslims are the most likely among all religious groups to be living in accommodation rented from the council or housing association (28%); 4% live rent-free (2004 figures). As if this is not enough, the total prison population in the UK amongst category A and B criminals (third degree criminals) is now 35-39% Muslim.

Since current statistics fail to clarify how many Muslims actually collect benefits, and whether unemployment figures

include those on disability and in prison, only a crude estimate can be made. In spite of this our calculation is based only on basic, lowest payouts in Britain, meaning most additional paypits that Muslims would be entitled to are not included. The indications are nevertheless shocking: roughly 4.25 million Muslims, or more than 85%, live off tax payers (2012 unconfirmed estimate increased the Muslim population number from 3 million to 4.25). If we average this with a simple, quick calculation of the minimum benefit payment of £67 a week granted in Britain for adults, at least £ 284,750,000 per week  (£1.139 billion per month) is spent from taxpayers on Muslims who barely contribute anything whatsoever to Britain’s revenues – except making more Muslims.

The calculation is not detailed enough to include housing benefits, childcare support, medical care and other coverage. We can estimate that only in unemployment support, Muslims cost the British government at least £ 13+ billion a year.

A more detailed calculation need to be made when there are clearer records at hand. At present the government will not publish current, clear and defined numbers and we had to find them through different sources most of it coming from wikileaks (see below). The older numbers are inaccurate and highly understated since data have shows that the Muslim population tend to double in less than a decade (in 7 years).

If the same population growth continues in a steady flow, by 2030 Britain will have a 40% Muslim population. And who will feed and house them? With this type of parasitic addition to society there is simply nowhere for the British economy to go but downhills. As if that is not bad enough, 32 percent of Muslim students (born in the UK) believe killing in the name of religion is justified; 54 percent wanted a Muslim Party to represent their world view in Parliament, and 40 percent of young Muslims in the UK want the country to be governed under Sharia law (2004 report).

Tags: Parasitism, UK, in, the 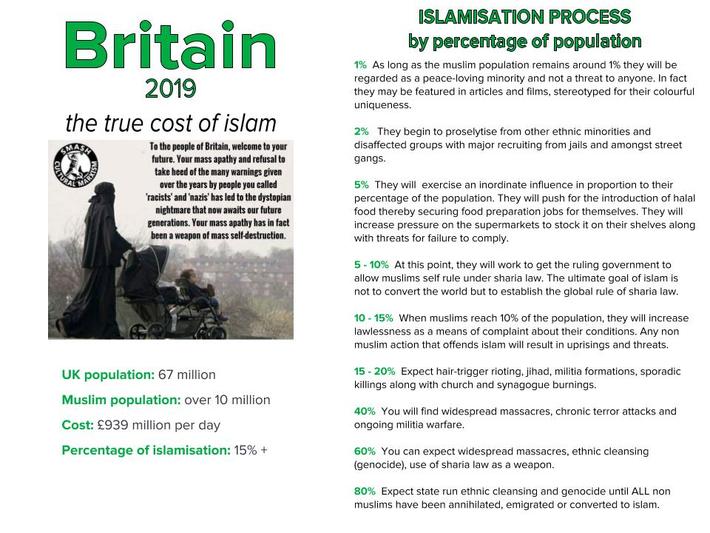