There have to be reasons why most – nearly all – Muslim countries are in such an economic mess. (Those few that aren’t in such a mess, including Malaysia, aren’t so because they don’t allow Islam to interfere in their economic – and other – affairs to such a great degree as Pakistan and other Muslim countries. It also depends on how much oil they’ve been blessed with.)

Well before the 20th century, or during and within the various Islamic empires, these Muslim populations didn’t really need usury (riba) - or rates of interest on loans - because they taxed all the non-Muslims (dhimmis) of the nations and empires they conquered. This was called jizya. This is the extra tax that all non-Muslims had to pay for ‘protection’ (often protection from Muslims) when living in Muslim or Islamic states or empires.

One point that can be made is that because riba and zakat (see next section) fail, economically speaking, Muslims traditionally and historically relied on jizya instead! That meant that jizya at least partly sustained Muslim countries and empires. 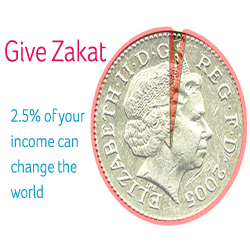 According to the sharia law of zakat, every adult male Muslim has to pay 2.5% of his wealth to the poor or needy. That may not seem fair by Western standards. For example, take the admittedly extreme case that if a person has £500 in wealth: 2.5% of that will be very insubstantial. However, if a Muslim has  £10 in wealth, then 2.5% of that would be a real burden. Of course it is said, by (some) Muslims, that there is a minimum level of wealth below which no zakat is payable. But that would depend on what that minimum rate is and by whom it is set, as well as on when it is set.

Above and beyond all that, zakat is not something collected by the state or government anyway. It is voluntary in nature and also has no direct impact on domestic/private economies. Because it is essentially for the poor or needy, it is not really an economic tax at all.

The sharia law against interest on loans (riba), as well the inefficiency (i.e., it’s not collected by the state) and unfairness of zakat, may contribute massively to the backwardness of Muslim nations.

As I said, zakat is not a government or state tax. It’s a voluntary tax which Muslims are supposed to impose upon themselves. But what if they don’t? It follows from this that not only is there are big economic problem for a Muslim state in that it clearly can’t use zakat, it may also be the case that not all adult Muslims – even if they have the money – pay it anyway. And even when they do pay it, it is paid to the poor and need and is not directly - or even indirectly - connected to economic investment or sustaining any kind of productive capacity. In addition, the fact that zakat exists means that many Muslims do not want to pay any extra – non-Islamic! – tax to the state or government.

The other thing about zakat which follows from it being a tax on wealth -rather than being a tax on income (income tax) - is that it is collected just once a year. It follows from this that if a Muslim has spent up by that time, then he will pay no zakat. Whether or not he earns £10 a week or £500 a week, if he has spent up by the time zakat comes around, then he won’t pay a thing.

Finally, even if Muhammad set the rate of zakat at 2.5%, why should it automatically stay at that rate, regardless of fairness, efficiency or practicality? This diktat – or sharia law - against usury (riba) has even become (sharia) law in non-Muslim countries – such as the UK! All sorts of non-Islamic/Muslim banks and companies are offering interest-free loans to their Muslim customers; and that is to discount all the British banks and companies which are completely Muslim or Islamic in the first place.

All this is a con anyway. In the British banks case, usury, or riba, simply comes in through the back door. British banks charge a large upfront fee on their loans to Muslims (‘sharia finance’) - in the form of management fees and other charges - so that these very same Muslims don’t receive any later fees in the form of interest on any future loans.

This sounds absurd and self-contradictory. The supposed sin of usury is that it is ‘profit on money’ (or it is ‘unearned income’), rather than profit from work or labour. But charging a large upfront fee to their Muslim customers is also a kind of profit from money (from unearned income; not from work or labour)! Does exactly the same kind of thing happen in Muslim countries? It must do. Hence this at least partly explains the economic impotence of Muslim countries.

It is also the case that UK banks charge upfront fees to non-Muslims (the ‘arrangement fee’, etc.). On the other hand, Islamic banks, or UK banks with ‘sharia finance’, charge ‘management fees’ or something similar. This means that a Muslim will pay a fee in order to not pay interest on his future loans. That is, he will pay a fee in order not to pay another kind of fee. It follows that the non-interest (non-riba) fee may be equal to - or even higher than - any possible interest that would be paid - as interest - on any loans. Again, this appears to be riba through the back door. This is shown even more graphically in the case of ‘sharia renting’. What happens is that the Islamic bank, or a UK bank which uses sharia finance, buys the house which a Muslim wants to buy. Then this Muslim pays rent to the bank; as well as a certain amount of capital repayment on the house itself. Yet isn’t the renting of property a classic case of usury or profit from money - or from capital in this case (profit from ‘unearned income’)? This can mean, and often does mean, that ‘sharia renting’ ends up with the Muslim paying just as much, or more, to the bank (for a house) than a non-Muslim would pay if he took out a mortgage for a house from the same bank.

The other thing you can say if that if Muslim countries don’t pay interest on the loans they receive from the IMF and from Western states, and if British Muslims don’t pay interest on loans from British banks (even if they pay an upfront free for that privilege), then this may well be a surreptitious and sly way in which Muslims are actually extracting jizya (the Islamic tax on non-Muslims) from non-Muslim banks and from non-Muslim states – from us! Is that the real reason why Muslim states are not repaying the loans it has received from the IMF and from Britain? Is that systematic and ongoing non-repayment of foreign – infidel – loans actually in accordance with sharia law?

To conclude. The sharia law against interest on loans (riba), which has a bad effect on investment, etc., as well as the inefficiency and unfairness of zakat, may contribute massively to the backwardness of both Muslim peoples and states.