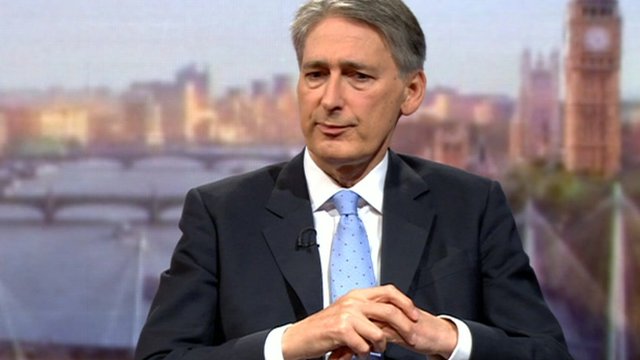 Defence Secretary Philip Hammond: "We're very determined that the rules of engagement will be followed"

Five Royal Marines have been charged with murder over an incident in Afghanistan in 2011, the MoD has said.

It says nine marines were arrested over the incident, involving an insurgent. Four have been released without charge.

The five charged remain in custody, and the next stage of the process is likely to be trial by court martial.

The marines were arrested by the Royal Military Police after suspicious video footage was found on a serviceman's laptop by civilian police in the UK.

The charges are related to an incident in Afghanistan last year, when Royal Marine 3 Commando Brigade was based in Helmand.

The MoD previously said the incident followed an "engagement with an insurgent" and no civilians were involved.

The first concern for military commanders is how will these allegations impact the war on the ground?

That is why the Ministry of Defence has not made clear exactly where this incident took place.

How will Afghans respond and how will the Taliban use this for their own purposes? Though it's important to say that it's hard for the Taliban to take the moral high ground when they do not abide by any rules of war.

The second concern is the impact on the wider mission. The chancellor was recently reported to have asked why do British troops need to remain in Afghanistan for another two years.

We were told George Osborne was only playing devil's advocate. But there are many others who seriously question why British service personnel are still fighting and dying in a war that's already lasted more than a decade.

This incident will only add fuel to that debate. British military forces had hoped to leave Afghanistan with their heads held high.

These allegations threaten to undermine their reputation - not just for the five Royal Marines who have been charged with murder, but for everyone in uniform. That is why the MoD is taking these allegations so seriously.

It is believed to be the first time UK servicemen have been arrested and charged with such charges during the Afghanistan conflict.

The Service Prosecuting Authority (SPA), an independent body that conducts prosecutions on behalf of the military, decided the five should face murder charges.

Bruce Houlder QC, the director of service prosecutions, will oversee the next stage of the process.

Speaking on the BBC's Andrew Marr Show, Defence Secretary Philip Hammond did not comment on the specifics of the case but insisted the MoD was "determined that rules of engagement" be followed.

He added: "Everybody serving in theatre knows the rules of engagement, they carry cards in their uniforms with the rules on them in case they should need to remind themselves."

During a six-month tour of duty, which lasted from April to October last year, seven servicemen from 3 Commando Brigade were killed in action, all from 42 Commando.

A court martial is a public court with similar powers to a crown court. It can impose prison sentences, fines or other forms of justice depending upon the nature of the crime.

They are presided over by a judge advocate and a board of up to seven lay members, individuals with no legal training much like a jury in civilian courts.

Colonel Richard Kemp, a former commander of British forces in Afghanistan, said: "The case against the troops concerned needs to be set out quickly because there's no question that these kind of allegations will undermine the morale of troops serving in Afghanistan today."

The MoD said it would be inappropriate to comment further on the ongoing investigation.