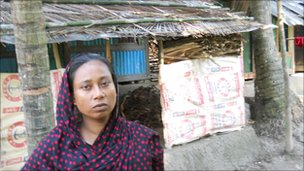 Monju Begum says her neighbour had been harassing her for months

Police in southern Bangladesh say a woman cut off a man's penis during an alleged attempt to rape her and took it to a police station as evidence.

The incident took place in Mirzapur village, Jhalakathi, about 200km (124 miles) south of the capital, Dhaka.

Monju Begum, 40, a married mother of three, told police that neighbour Mozammel Haq Mazi forced his way into her shanty and started assaulting her.

Mr Mazi, who denies the accusation, has been admitted to a nearby hospital.

"We will arrest him once his condition gets better," police spokesman Abul Khaer told the BBC.

"She said she fought back and cut off his penis and brought it to our police station in a polythene bag to prove that Mr Mazi tried to rape her," police spokesman Abul Khaer told the BBC.

"She has registered a case accusing him of attempted rape," he said.

"It is quite an unusual incident. As far as I am aware, this is the first time that a woman has brought a severed penis to the police station as evidence."

Monju Begum told police that Mr Mazi, a married father of five, had been harassing her for the past six months.


But Mr Mazi denied the allegations.

"We were having an affair and recently she suggested that both of us can go and settle down in Dhaka," Mr Mazi told the BBC from the hospital in nearby Barisal.

"I refused and told her that I cannot leave my wife and children, so she took revenge on me."

Prof AMSM Sharfuzzaman, a senior surgeon at the Sher-e-Bangla Medical College and Hospital in Barisal town, told the BBC it had not been possible to reattach the organ.

"Police brought his severed penis several hours after the incident," he said.

"We are treating him so that he can urinate normally without the penis."