The intelligentsia will be the last to admit it.  But that's the beauty of reality.  You can't wish it away.

Of course we don't get this in the news.  Too busy with Paris Hilton or gay marriage.  It probably helps keep things quiet since the French media are now forbidden from reporting on the 30,000 cars (at last count) blown up by muslims there each year.

From the above video:

The socialist mayor of a suburb of Paris has been asking for the army and UN peacekeepers to be deployed there since 2009!

"It is amazing that bullet-proof vests are not compulsory for tourists."

The non-muslim French do not dare enter the ring of muslim suburbs that surround their capital city. [Wow.  The blindness and ignorance of the history of siege warfare is astonishing. Future generations will talk not about the Siege of Vienna in 1683, but the Siege of Paris in 2023.  And still the French are eating croissants every day; people wrongly thought 'bake the threat of islam into bread and no-one will forget it'.]

The muslim scrotes of Strasbourg are proud to proclaim their ghetto "Baghdad".  It's clear that the muslims/gangs (same thing) are in control.  The dhimmi multi-culti social worker serves as an agent of misinformation.

The author of a book on Strasbourg says that his country is returning to tribalism.  [Balkanisation, anyone?  Again, there is a failure to acknowledge the history of europe.]

The police spokeswoman says "There are no 'no-go zones' "  She says they enter them with a fully-tooled army.  [Sorry dear, that is a 'no-go zone'.]  She says the police have to have escape routes, and they are often injured in these sorties.  Just before that, the police admit they no longer chase suspects because if the suspect dies inevitably there will be rioting.

Laurent Obertone says that French liberalism is pathological. [James Burnham must be smiling in his grave.]

And as if the process of Balkanisation was not obvious, the socialist mayor says "Weapons that were used in the Balkans have now appeared here."  [Isn't that a kind of poetic symmetry?  If it occurred in a movie, the intellgentsia would be waxing lyrically about how clever the auteur was.]

Going on for 6 years since this discussion was started on 4F.    A socialist minister in Emperor Macron's government resigned, saying that civil war is on the cards.  Bear in mind that this is coming from a "diversity" loving far-leftist.  With the re-branded National Front being the front-runner in the upcoming European Parliament elections in France, then the civil war will take a step closer.

Gerard Collomb, France’s leaving Minister of the Interior, warned in his farewell speech of the critical situation in the country’s suburbs.

“I went to all difficult suburbs, the situation there is very degraded (…) today, we live next to each other, and I’ve always said it, I fear that tomorrow we’ll have to live face to face,” the leaving minister said.

Collomb is a member of the Socialist Party and very “minorities friendly”. For him to basically announce the possibility of a civil war means that something terrible must be going on.

The Minister of the Interior served under Emmanuel Macron’s rule since May 2017. Collomb leaving the government after such a short time is another blow for Macron, who is far from popular in France.

Opposition leader Marine Le Pen was surprised with Collomb’s words:
“Gérard Collomb reveals that out of control suburbs are like an explosive ready to be lit overnight and issued a solemn warning to the Prime Minister. We would have liked such language of truth for 17 months!”

The leaving French Minister certainly isn’t the first who says the country could face a civil war.

Eric Zemmour, one of France’s most popular authors said “France is a country where civil wars have occurred in the past and the possibility of a future one is to be taken seriously”.

Zemmour was even charged over his comments as he spoke about an ‘Islamic invasion’ in France that could result in a religious civil war.

French professor Christian de Moliner even claimed France should split in two states: One with a French law and one with Sharia law for the increasing number of Muslims in the country.

“We will never be able to eradicate radical Islamism… While we are not yet at open war, the faithful of the Prophet are already regrouping in areas sometimes governed by special rules,” the professor said.
https://searchlight-germany.blogspot.com/2018/10/far-left-minister-...

Another French parliamentarian has criticised Emperor Macron, saying that he is behaving like the French leaders of the interwar period - pacifists who ignored the rise of Hitler.

He says that Macron is busy demonising America, Russia, Hungary, Italy (and Britain too, though he doesn't say this) -- anything but address the problem of Islam.  French soldiers are not being killed by Russians or Italians, but by Muslims.  And who was sat on the front row with Emperor Macron but Erdogan -- just about the only leader in the world who has been imprisoned for inciting Muslims to hate non-Muslims.

Wow, in that video, a politician that dares to remember Turkey's military take-over of North Cyprus! I thought that that had just become a fait accompli and we just had to 'deal with it'.  Maybe next time he can mention the military take-over of Turkey by the Islamic horde, and how that should be returned to the West rump?

Demonstrations in France lead to a death. Will we now get calls for all those organisations to be shut down by the police and their media outlets to be expunged from Facebook, Youtube and Patreon? No, not really, after all, they are not conservative, so no blame can be attached, collective guilt does not apply in this case. 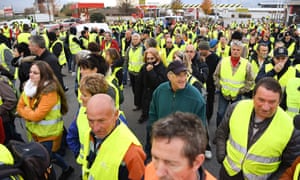 A protester has died after being hit by a motorist as demonstrators angry at fuel tax rises caused gridlock in parts of France on Saturday.

The protester was killed at Pont-de-Beauvoisin, in the south-eastern Savoie region, where 150-200 protesters had gathered for a demonstration at 8am.

The local prefect, Louis Laugier, said the motorist had been taking one of her children to the doctor when she was stopped by demonstrators at a roundabout. After talking to them, she tried to move off down a side road, where protesters banged on her car.

“It appears the woman panicked, accelerated and ran over a person who later died,” Laugier said. The victim, a 63-year-old woman, was pronounced dead at the scene. The driver was arrested.

Police said a total of 24 people had been arrested and that most of the injuries were caused by angry drivers trying to force their way through demonstrations.

The French authorities said around 124,000 protesters were taking part in 1,000 protests across the country and in overseas territories, including Corsica. The grassroots movement, named after the neon yellow vests French motorists are obliged to keep in their vehicles, formed after President Emmanuel Macron raised fuel taxes. The leader is accused of being detached from the reality of daily life for ordinary people.

On the Champs-Élysées in Paris, a group of gilets jaunes walked slowly back and forth over pedestrian crossings chanting “Macron resign” as police tried to keep traffic moving.

In other parts of the country, demonstrators set up “filtering barriers” that blocked access to toll booths, motorways and major arterial routes.

The government has defended the taxes as part of a programme to reduce the country’s reliance on fossil fuels. It has offered financial incentives to persuade motorists to swap older, polluting vehicles for newer, cleaner models.

"Who would have predicted ten years ago that a professor would one day be beheaded when he left college?"

What?  How did they NOT see that coming?  This discussion on 4F began in 2013, nearly a decade before these Generals woke up. Until I drove across France in 2018 and 2019, in 30 years I'd had nothing but weekend breaks in Paris.