Is Turkey Using the Courts to Silence Critics? - Time Magazine

Is Turkey Using the Courts to Silence Critics?

Journalists and human-rights activists protest in front of the Istanbul courthouse during the trial of two prominent Turkish journalists Ahmet Sik and Nedim Sener on Nov. 22, 2011


Nine months after they were first detained, two well-known and internationally acclaimed Turkish investigative journalists finally appeared before a judge on Tuesday in a trial that has become a rallying point for critics of Turkey's curbs on freedom of expression. Ahmet Sik and Nedim Sener are among 13 defendants, including editors of a hard-line secularist website, accused of seeking to overthrow Prime Minister Recep Tayyip Erdogan's Islamic-leaning government — charges that international observers say have little evidence to support them.

"The prosecutors had promised to produce hard evidence to justify [the journalists'] pretrial detention. Where is it?" said Johann Bihr, head of Reporters Without Borders' Europe desk, outside the Istanbul courthouse. "Contrary to what was always claimed, the case against them is based on their work as journalists."(Read TIME International's cover story "Erdogan's Moment.")

Held up as an example of secular democracy for the Middle East, Erdogan's government is increasingly under fire for its treatment of journalists, pro-Kurdish advocates and opposition activists. There are more than 1,000 cases before the European Court of Human Rights concerning the Turkish government's alleged quashing of freedom of expression, according to officials. "This situation has a chilling effect on journalism and journalists in Turkey," said Thorbjorn Jagland, secretary-general of the Council of Europe.

Members of the European Parliament, members of journalists' groups and rights advocates were among the dozens gathered on Tuesday outside Istanbul's so-called Palace of Justice — a pale pink edifice of granite and glass that squats over the center of the city. Part mall, part hospital in appearance and with 326 courtrooms, it opened in August as — it is said — Europe's largest courthouse. The irony was not lost on those gathered on Tuesday. "They'll need all those hearing rooms if they keep on detaining people," quipped one journalist.(See pictures of homelessness in Istanbul.)

Turkey aspires to become an E.U. member, yet its penal code is in urgent need of reform. There are currently 68 journalists in jail — more than in China, according to the International Press Institute. They are frequently detained under vague antiterrorism legislation and then wait for months before seeing a judge. "We clearly have a situation which needs to be solved to help Turkey move forward," said Jagland. In addition to Sener and Sik, the defendants in this most recent case include editors of Oda TV, a hard-line secularist Internet news portal critical of Erdogan.

I have known Sik for many years — we worked together at Reuters. A passionate leftist who has spent his career working for human rights — and being harassed for that work — he is being accused of belonging to, of all things, a far-right nationalist network called Ergenekon that sought to stage a military coup and overthrow the government.(Read "Why Syria and Turkey Are Suddenly Far Apart on Arab Spring P...

Sik was arrested in March, shortly before he was due to publish a book called The Imam's Army, an account of the allegedly increasing influence wielded by the Pennsylvania-based imam Fethullah Gulen among Turkey's security forces. Gulen is an elderly Muslim preacher who has millions of followers in Turkey — depending on whom you talk to, he is seen either as a moderate voice for tolerance or a secretive and sinister figure seeking to Islamicize the country. Police seized and banned The Imam's Army, but it was circulated on the Internet, and a group of intellectuals and journalists recently reissued it under a collective moniker as an act of civil disobedience.

Hundreds of people, including several former generals, are currently behind bars pending trial in Ergenekon-related proceedings. The glacial pace of Turkey's judicial process means that it can take months before a hearing. On Tuesday, the judge rejected a request that the 13 defendants be released, and then adjourned until mid-December. Any requests made by lawyers could result in similar delays, possibly dragging the trial out for months.(Watch TIME's video "Turkey's Unconventional Muslim Minority.")

Separately, hundreds of people — mostly pro-Kurdish activists — have been jailed in recent months on charges of belonging to the KCK, allegedly an offshoot of the separatist Kurdish PKK. In October, prominent publisher and free-speech activist Ragip Zarakolu and a well-known Istanbul-based political-science professor were among those arrested, prompting criticism from Europe and the U.S. Erdogan has thus far shrugged off criticism of the detentions — but as his aspirations to international leadership grow, he may find such practices less and less tenable.

'Turkey aspires to become an E.U. member, yet its penal code is in urgent need of reform.'

try reforming the Sharia!  how can Erdogan keep both his muslim followers happy AND aspire to join the EU which, at the moment anyway, in many ways contradicts the Sharia will be a good juggling act to watch.  you can take Islam out of Europe but cannot put Europe in into Islam.

This is slightly of topic but may be relevant

I put upsome info about a Turkish Book by Harun Yahya,. Yahudilik ve Masonluk (Judaism and Freemasonry,) published 1986. The book contains images from the Algerian Civil war, but the book claims it is crimes committed by Israel, at the

bottom of the page we can see 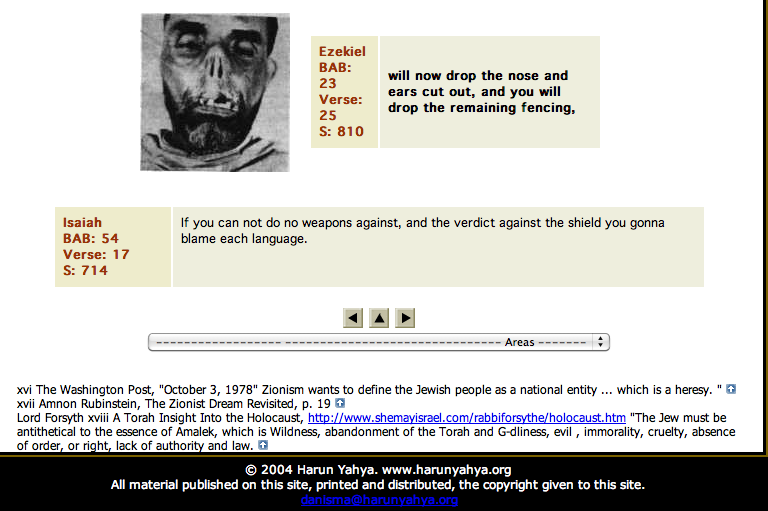 Notice that the material is copyrighted

On the page is the photo of the young girl, I was refering to in my comments, next to it is another photo of several children, this photo is from the El Halia massacre Algeria August 20, 1955 Which was part of the Battle of Philippeville

While the main assault was going on, there were also side actions in the countryside around Constantine. One was an attack on El-Halia, a sulphur-mining community where 130 Europeans had lived with about 2,000 Algerian Muslims in peace. The Muslims were encouraged to rise up against the Europeans after the FLN told them there would be no risk, because Egyptian and American troops were landing that day to expel the French from Algeria.. Led by the FLN, babies were chopped into pieces and smashed against walls, while women were raped, disemboweled and decapitated.[8] The men were off working in the mines when the fellagha attacked. Their weapons were locked up because the person in charge of the key had gone to the beach

So what we have here is a clear copyright violation speech

Now let us have a look at the Author, Adnan Oktar (born 1956), also known as Harun Yahya and a little what Wikipedia has to say

Since 2007 Oktar has successfully had the Turkish government block public access to several websites. In April 2007, Oktar filed a libel lawsuit against the owners of Ekşi Sözlük, a virtual community similar to everything2. The court reviewed the complaint and ordered the service provider to close the site to public access. The site was temporarily suspended so the entry on Oktar could be expunged and locked. Then access to Süper Poligon, a news website, was also restricted following Oktar's complaint. In August 2007, Oktar got a Turkish court to block WordPress.com in all of Turkey. His lawyers argued that blogs on WordPress.com contained libelous material on Oktar and his colleague, which WordPress.com staff was unwilling to remove.

In addition, Edip Yuksel, a Turkish writer who knew Oktar in the 1980s and is now critical of him, had his website banned in Turkey from Oktar's complaints. In addition, Yuksel wrote a Turkish-language book about Oktar called The Cult of the Antichrist, but he has yet to find "a publisher willing to brave Mr. Oktar's lawyers."

On September 19, 2008, a Turkish court banned Internet users in Turkey from viewing the official Richard Dawkins Web site after Oktar claimed its contents were defamatory, blasphemous and insulting religion, arguing that his personality was violated by this site. The ban was lifted on 8 July 2011. Also in September 2008, a complaint by Oktar led to the banning of the internet site of the Union of Education and Scientific Workers (Türk Eğitim Sen). This was followed by a block of the country's third-biggest newspaper site, Vatan, in October.

Thinking about it just now, with the ways things are going about the laws that OIC are trying to push throug we should start getting as much info about or enemies and attack them in the same way. Adnan Oktar may safe in Turkey, but English translations of Oktar's books appear with "Ta-Ha Publishers", London, UK; and "Al-Attique Publishers", Ontario, Canada and "Goodword Books"

There we go Morrigan, here is some-thing for your JDL mates in Canada, you want any help on this one, Alan and Joe have my e-mail

That must be the same Harun Yahya that Richard Dawkins was railing against when I heard him speak against creationism and its supporters at the Conway Hall.  He seems to have a lot of money and is well connected in Turkish society.  He is a  bad threat.

That must be the same Harun Yahya that Richard Dawkins was railing against when I heard him speak against creationism and its supporters at the Conway Hall.  He seems to have a lot of money and is well connected in Turkish society.  He is a  bad threat.

Ahhh he has a lot of money, I wonder if there is a legal way to relieve him of some of it.

Yes this guy is vet serious threat, he will be far more dangerous once OIC get their way. It is about time that we start learning to use these laws that OIC to use against then. There could be a few Bob to be made in the bargain, Ho Ho.