Thoughts on the Slough EDL demo

So-called experts have been predicting our demise since the beginning.  Again this year there is a chorus from the ‘experts’ saying ‘the EDL will disappear or break up into small and ineffectual hate groups.’

They must be disappointed that we are still here!  As this was the first national demonstration of 2014 I think it would be good to take a little look back before we look forward.  2013 was eventful in many ways.

The lowest point, of course, was the murder of Lee Rigby on 22 May.  We all remember where we were and what we were doing when we heard the news.  The response amongst the patriot community was immediate.  People came out in concern that very evening and a few days later over 7000 EDL people demonstrated in New Castle on 25 May.  The support of the people of New Castle on that sunny day was heartening.  People cheered us from the windows and pavements.  We were standing proud for this country and in resistance to the Sharia pushers and countering the lies by our Politicians and ‘leaders’ that terrorism and Islam are not connected.

Another low point was the unexpected and sudden departure of our two leaders and founders, Tommy Robinson and Kevin Carol, just four days from the national demonstration in Bradford on 12 October.  Again our enemies rejoiced and predicted our demise.  But we gathered together by dozens of divisions from around the country.

In all, six national demonstrations were organised where we gave voice to the anger at the destruction of our country by Muslims and their enablers on the Left; and a voice of hope to resistance to Sharia-pushers and their enablers in many areas of the life of this country.  There were also, of course, many regional and more local demonstrations, largely ignored by the national media.  Such gatherings are the bread and butter of the EDL.

Other national EDL demos took place in Solihull, Manchester, Birmingham and Tower Hamlets.  Prior to every demonstration, both nationally and locally, we had to counter the lies that we are racist and violent; that we divide the community.  But friends we do not promote racism or violence and we do not divide that which is not already divided.

We are not going to let this happen!

In the face of wishful thinking and bogus analysis from so-called experts, the EDL have made a tremendous impact on the political landscape of this country; and have become a stronger and more determined force through our work and responding to the events of 2013.

There are millions of people in this country who, like us, are worried and angry at what they see is happening to ‘England’s green & pleasant Land.’  The EDL is on the side of the true heart of this country and commonsense.  We are not law breakers and hooligans.  We just want the Government to understand the nature of the problems we are highlighting and do something effective to solve them.

We are people who are awake to some of the problems besetting this country; and once awaken we will not go back to sleep.  Onward to 2014!

For anyone in Slough on the 1st February 2014 the non-violence of the EDL demonstration was quite clear.  It was not the gathering EDL crowd next to Tesco's or the subsequent march to the High Street which either required or had a ring of police surrounding them.  However, it was the so-called anti-fascists who did require a ring of police, including dogs and mounted police, to try to halt them from their violent attacks on others.  The numbers of police needed in the vicinity of the EDL crowd was minimal in comparison to that required around the anti's, who threw smoke bombs, injured police horses by stabbing them with their flag poles and by throwing metal barriers at the horses.  At one point a crowd of anti's with their faces covered by black scarves managed to break through the police lines and ran shouting and screaming through a nearby shopping mall in order to try and reach their prey.  The shopping mall was full of petrified shoppers, who cowered behind the hastily closed shutters of numerous shops.

I wondered why the police were baracading the doors of the shopping Mall and what was happening in there.  Thanks for that info.  Those people were very daring to scare unsuspecting shoppers. 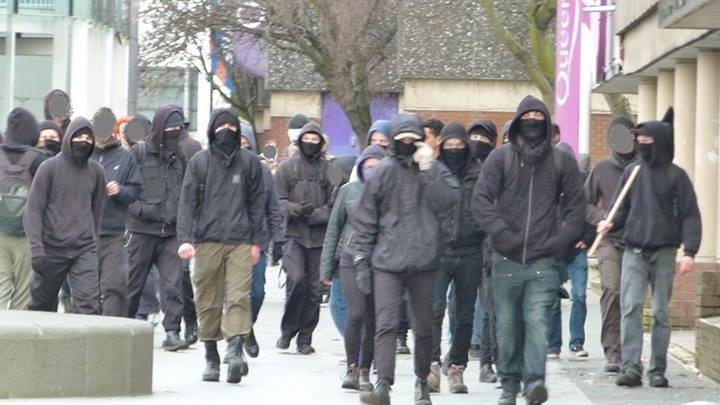 It was claimed these were the "locals" from Slough.  Strange how they are all dressed in the archetypal violent-fascist-antifa uniform. and weren't even chanting in English at times!

And what a fantastic and well spoken speaker she is!  Who is she?  She should be given more prominence and opportunity to be heard!

What an absolute star she is!

Yes, a great shame that she can't be our spokes person?

Thank goodness Naomi-Anne has now come out of the shadows - got to now be the EDLs greatest weapon against the normal accusations of racists/Far Right.