From Wikipedia, the free encyclopedia
Jump to navigationJump to search

On July 15, 2017, Justine Damond (née Ruszczyk)[2][3] a 40-year-old Australian-American woman, was fatally shot by a 33-year-old Mohamed Noor, a Somali-American Minneapolis Police Department officer, after she had called 9-1-1 to report the possible assault of a woman in an alley behind her house. Occurring weeks after a high-profile manslaughter trial acquittal in the 2016 police shooting of Philando Castile, also in the Twin Cities metro area, the shooting exacerbated existing tensions and attracted national and international press.[4][5][6] 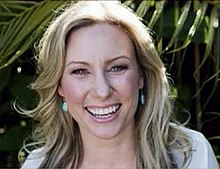 Justine Maia Damond (April 4, 1977 – July 15, 2017) grew up in the Northern Beaches area of Sydney, New South Wales, Australia and attended Manly High School.[10] She graduated in 2002 from the University of Sydney as a veterinarian, then worked as a spiritual healer and meditation coach. She met Don Damond, a U.S. citizen, while attending a neuroscience workshop.[11] The couple became engaged on December 29, 2014,[12] and planned to marry in August 2017. Damond stopped using her surname Ruszczyk and took the Damond's family name ahead of their marriage.[13] Damond held dual Australia and United States citizenship, as her father, John Ruszczyk, holds US citizenship.[14]

Mohamed Mohamed Noor[15] (born October 20, 1985),[16] was the officer who shot Damond. Noor's partner, Matthew Harrity (then 25 years old), was the driver of their squad car.[17] Noor had been lauded in the past by Minneapolis mayor Betsy Hodges and the local Somali community as one of the first Somali-American police officers in the area.[18] At the time of the shooting, Noor had been with the Minneapolis Police Department for 21 months; Harrity had been on the force for one year.[17]

In two years as a police officer, Noor had three formal complaints against him, two of which, as of September 2017, were pending resolution. In a separate case from May 2017, he was being sued for allegedly assaulting a woman while on duty.[19]

Following the deadly shooting, the Star Tribune reported Noor's police training had been "fast tracked", making reference to the seven-month immersive training program for cadets; some suburban police departments see the cadet programs as a way to add diversity to their police forces quickly.[20] Noor's police training had been part of the cadet program for the Minneapolis Police Department, an accelerated[20] seven-month program aimed at candidates who already have a college degree and wish to enter law enforcement. Former police chief Janeé Harteau stood by Noor's training:

On July 23, 2017, MPD and Council Member Elizabeth Glidden denied news reports of there being a "fast-track" seven-month MPD training program.[22][23] In September 2018, it was reported that in 2015, two psychiatrists and other training officers had raised concerns about Noor's fitness for police duty.[24] Two months before the shooting, Noor pointed a gun at the head of a driver he had pulled over for a minor traffic violation.[24]

On the night of the shooting, Damond called 9-1-1 at 11:27 p.m., and again eight minutes later, 11:35 p.m.[25] She reported that she thought she heard a woman either having sex or being raped.[26] Dispatchers categorized the call as "unknown trouble: female screaming"—a relatively low priority.[27] Officers responded to the area, the low-crime neighborhood of Fulton in southwestern Minneapolis,[27] and found no suspects or signs of the suspected rape that had prompted Damond's telephone calls to 9-1-1.[28]

Officers Noor and Harrity, after driving through an alley with the lights on their police Ford Explorer off, heard no signs of criminal activity.[27] As the two partners prepared to leave, Noor "entered 'Code Four' into the cruiser's computer, meaning the scene was safe."[27] Harrity would indicate "that he was startled by a loud sound near the squad," and immediately, then, Damond approached the police car's driver-side window.[29] Harrity drew his weapon, but, pointed it downward, did not fire.[30] Noor, however, fired once through the open window, fatally striking Damond in the abdomen.[27][29] Damond was unarmed and barefoot.[27] The officers attempted CPR to no avail; Damond died 20 minutes later.[31]Cite error: There are <ref> tags on this page without content in them (see the help page).

Harrity later told a supervisor, "We both got spooked."[27] At Noor's trial, Harrity testified of hearing "something hit the car and I also hear some sort of murmur," and that he feared an "ambush," but deemed it "premature" to use deadly force.[30] Noor testified that he did not see Damond's hand or any object in the hand, but nonetheless believed that his partner "feared for his life" and "there was a threat."[32] At Noor's trial, prosecutors presented evidence that Damond's fingerprints were not on the police car, suggesting she never made contact with it, and prosecutors called two expert witnesses on the police use of force, who testified that Noor's decision to shoot was unreasonable.[33]

Both officers had their body cameras switched off.[34] Minneapolis introduced police body cameras in 2016, but their activation was not mandatory in all situations.[35] No audio or video recordings captured the killing,[27] although a 16-year-old cyclist took cell-phone video of the scene after the shooting.[36]

It's racist to even show this, in todays world. After all, all they are doing is taking back what's theirs after centuries of suffering under a regime of white privilege.
LOL, just joking.
Note that the news video is titled "hundreds of looters" not "hundreds of black looters" even tho there wasn't a single white person there.

I'd be very suprised if that video is still there 2 weeks from now. If it is, its just because ABC News has got special protection.

What do these people believe and support?

Not only racist but ageist!

When they are not covering up for grooming gangs, they are bending the knee to BLM thugs ; https://www.breitbart.com/europe/2020/06/15/total-surrender-to-anar...

The truth why police are kneeling ; https://www.youtube.com/watch?v=NcSI98E5Q80&feature=em-uploademail

Patrick Hutchinson himself said that he was worried about the effect those racist attacks on white people would have in the media. Add to that the income both those organisations can expect to receive, from corporations and even the government, and it doesn't need to be staged, he can just be protecting his own interests at that time. Just like Islam, BLM is all about getting preferential benefits and exemptions for its own tribal members.
Antony said:

There are twice as many whites killed by the police than blacks. However, a BLM supporter objected "how many of those were unarmed?" - the supposition being that those whites killed were dangerous gun toting rednecks, naturally.

Firstly, the objection is rubbish. The point is that BLM and its media allies are all preaching this mantra of oppressed blacks treated unfairly by the police. None of them mention the double number of whites. It is a form of deceit. If the issue is then one of armed v. unarmed, they could then raise that, but they don't because they are dishonest, and don't want to reveal the white deaths to be double.  By doing this the populace gets the general impression that blacks are being discriminated against.

Secondly, lets look at this unarmed issue. It is not easy. Here's one difficult paper that only covers 2009-2012. The key part is in table 8. This shows that, the number of unarmed white victims is the same as the number of unarmed black victims. "Aha!" the BLM racial supremacist cries, "since there 4 times more whites in the population than blacks, this shows a disproportionate number of unarmed blacks are being killed by the police". No, it doesn't - because blacks have far more stops by the police than whites, because, dare I say it (even tho the stats prove it), blacks in the US are far more criminal than the whites.