These photos show what happens to real women who wear the Islamic Veil. The photos depict horrifying hate and the unbearable suffering it inflicts upon female innocents. The photos were taken by Emilio Morenatti of the Associated Press. The text is based on work done by Nicholas Kristof—one of the few people at the New York Times whose work I am proud to quote. You may find them HERE. (Thanks to Yehuda for calling this to my attention).

What are we seeing?

The Arabization or the Saudi-ization of Muslims in Afghanistan, Bangladesh, and Pakistan is the hidden hand behind these acid attacks upon women. These poor girls and women have had their lives ruined; some have been forced to undergo surgery 20-30 times in order that they may see a little, or breathe a bit, hear something, perhaps in order to eat or make themselves understood. They look like…monsters. That was what their attackers wanted to accomplish. To render their faces into self-portraits of their attackers.

Why was acid thrown into their faces? The main reasons are because they dared to reject someone in marriage or because they wanted a divorce. The “jilted” suitors (or husbands) took their revenge in this fashion. If he can’t have her, no man will; I will make sure that no man will ever want her.” One young girl was gang-raped aftger which her rapists threw acid on her face. Another committed the “crime” of disappointing her father by being born female, not male. Many were disfigured as a result of a “family dispute.”

Thus, the punishment for being born female, for exercising any will of one’s own is, Saudi-style, the most horrible punishment. The men tried to make the women loathsome to humanity, to sentence them to painful surgeries, self-hatred, perhaps to lives lived in isolation.

Make no mistake. This tendency to disfigure women–even those who wear the Islamic Veil–is real. And, it might be coming our way if we do not stop the Wahhabi and Salafi influence which is funding our universities in North America as well as the Islamic religious schools.

For once, I will leave aside the question of what must be done and allow the photos to speak to you.

Permalink Reply by OldWarDog on November 29, 2009 at 20:27
For photo's and stories of individual acid attacks on innocent Muslim women and children see this excellent blog here:

I am so amazed in the above story.  It turns out one of those 2 white men was a Muslim!  Who could have predicted that?

Billy, who also uses the name Billal Kidd ­Mujahideen after converting to Islam, fled the family home in South London after he was put on police bail three months ago, a source said.

I guess he converted in one of Cameron's prisons, either for protection, or for the benefits of being a member of the strongest gang.  It's nice to know that we're paying for that kind of rehabilitation, isn't it?

London - from acid house to acid face ; http://alt-right-news.blogspot.co.uk/2017/03/london-from-acid-house... - wonder what the stats are for other culturally enriched areas ?

A burns surgeon who treats many acid attack victims coming out of East London has suggested that the proliferation of such crimes is now at epidemic levels.

Dr Martin Niall, a burn surgeon at Mid-Essex Hospital, told National Public Radio (NPR) in the U.S. that acid attacks in Britain “are now at levels that one of my colleagues described as epidemic”.

He added: “Everyone, ourselves included, has been shocked by this emerging threat to public health.”

Hundreds of attacks have already been logged for the first few months of 2017. Twelve people suffered burns and in some cases lost their vision after an attack in a Hackney nightclub at Easter, and two moped-mounted teens attacked five people around London in under 90 minutes in a July crime spree.

Delivery drivers in the capital — who are considered easy targets for bike theft assisted by acid — now refuse to work in certain parts of London due to the danger. 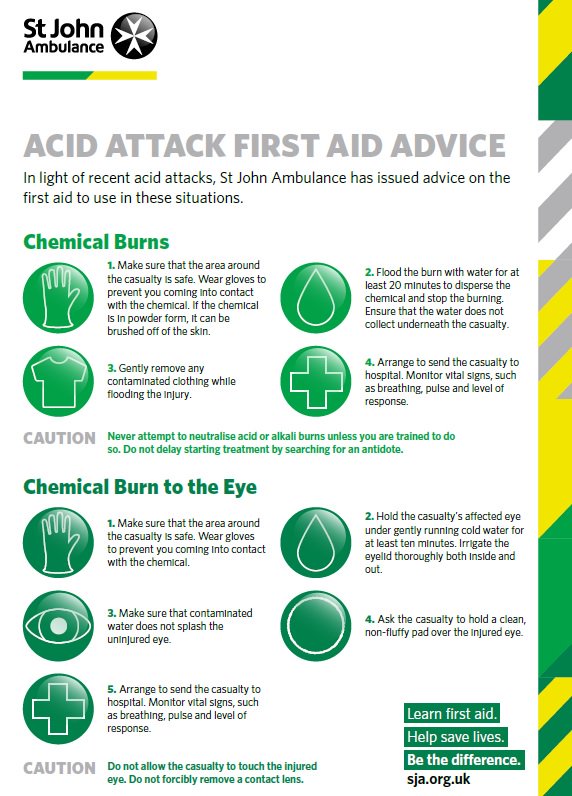 NPR suggests that “Acid attacks in the UK actually date back to before Victorian times,” citing a case dating from 1831 in which a domestic servant poured acid on a colleague while they were sleeping.

Although such incidents were not unknown historically, they were until recently considered rare and shocking crimes, and dealt with harshly — the servant in the aforementioned case was sentenced to be hanged.

Punishment is now much less severe, with David Phillips, who blinded and seriously disfigured Andreas Christopheros in 2015, being handed a sentence of just 16 years, with eligibility for parole after eight.

While perpetrators are not confined to any one community, between 2011 and 2016 attacks in London tended to be concentrated in areas which have experienced high levels of immigration.

Newham, Barking and Dagenham, and Tower Hamlets — all of which are minority White British — topped the list for total attacks in the period:

UK World’s Acid Attack Capital; Assaults Up 74 Per Cent in One Year The UK now has the highest number of reported acid attacks per person, with 1,800 assaults using corrosive liquid since 2010 in London alone, according to charity Acid Survivors Trust International (ASTI).

The number of assaults using acid and corrosive liquids in Britain grew 74 per cent in the most recently recorded year, growing from 261 in 2015 to 454 in 2016.

These figures mean Britain is now the nation “with the highest number of acid attacks per head”, according to ASTI director Jaf Shah, who told French daily Libération the typical victim of assaults using corrosive liquid are women in ‘patriarchal’ societies.

Pakistan, Bangladesh India, and Colombia are the countries most affected by the attacks according to ASTI, France’s Libération reported on Thursday.

But director Jaf Shah cautioned that the record number of attacks recorded in Britain may be down to victims having “more confidence in the UK justice system than in other countries where these attacks are frequent.”

“In societies which are still very patriarchal, [acid] attacks are mostly perpetrated by men against women, for reasons related to a love spat, rejection of sexual advances or refusal of a marriage proposal,” he explained.

The majority of acid attacks target women’s faces, Shah said, noting that this is “symbolic, an attack against their beauty, their femininity.”

“The goal is not to kill but to disfigure them, to stigmatize them socially.”

In Britain however, corrosive liquid has become a weapon of choice in gang warfare, with the majority of attacks carried out by young men on other young men.

“Two thirds of the victims [of acid attacks in Britain] are young men, and criminals are not necessarily just targeting their faces but their torsos too”, Shah said.

The use of acid in attacks is not new. Simon Harding, specialist in gang criminology and professor at the University of Middlesex explained: “Acid attacks were already perpetrated in the 14th  century, in Victorian times; it is mentioned in the investigation of Sherlock Holmes by Conan Doyle or, more recently, in the novel Brighton Rock by Graham Greene.”

Harding added: “what is worrying” about the attacks, is “how they have multiplied.”

For gangs, he said, the use of acid has several advantages. It’s two major draws are that it’s easily obtained at any age in a multiplicity of stores, and that there are no legal controls on corrosive liquid.

“It’s an inexpensive weapon that’s hard for investigators to trace,” he said, adding that in terms of criminal prosecution: “A knife attack will be considered attempted murder, resulting in a heavier penalty. Whereas an assault with acid will be considered as bodily harm and punished with a lighter penalty.”

Reporting in March on the huge rise in attacks taking place in London, the BBC said figures show the vast majority of cases never reach trial, with around 74% of investigations having had to be wound down since 2014 due to problems with identifying perpetrators, or victims being unwilling to press charges.