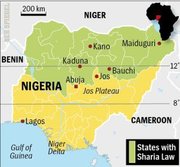 Recording the Jihad and spread of Sharia Law from Northern Nigeria 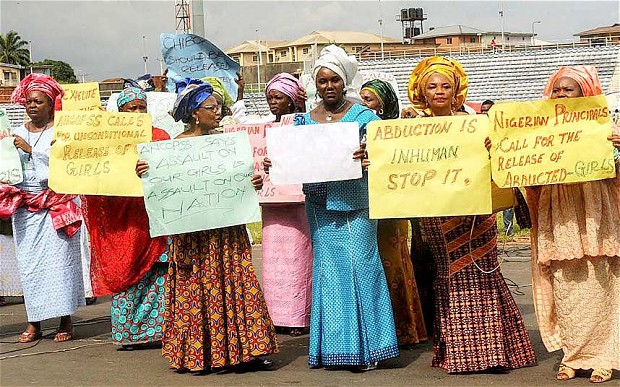 Islamic Sex Slavery in Nigeria - the abduction of the Chibok girls

The Dynamics of Conflict in Nigeria - by Fr. Joe Vella Gauci

Nigeria's Leaders Must Break the Cycle of Violence in Jos

Islamic Extremism on the Rise in Nigeria

The Islamisation of Nigeria

Nigerian senator and his young 'wife'

Shhh - do not discuss sharia

The attrocities in Jos - the Truth

You need to be a member of Kuffarphobia in Nigeria to add comments!

I keep finding things out about Nigeria that we don't get told over here, of course.

I was wondering why they have so many children, since Nigeria is already the most populous country in Africa, and I don't think they will be able to feed their own people once the oil money runs out.

It turns out that the Christians and Secularists tried to make contraception free by law, but the Muslims opposed it.  Why do you think that is?

So I think this is another case of Muslims lying to further their agenda, just like with images of Mohammed.  Such images are not strictly forbidden, they have made them themselves thru the ages, and they have not made a big fuss about it until now.  So they are lying when they now say it is forbidden, an that is their way of gaining more control over the kuffar society.

What a Hobson's choice for the Nigerian people - between a leader who oversaw massive institutional corruption and failed to beat Boko Haram, versus an islamic (former ?) military dictator.

I wonder how many non-Muslims voted for Muhammadu Buhari?  The role of the military is crucial for the future.  I am sure Muhammadu Buhari will keep the oil revenues flowing.

Fundamentalist Muslims like to work with criminals!  Yes, this is not a symptom of my rampant Islamophobia.  Nor is it a reflection of the fact that Muslims are 4 times over-represented in UK prisons.  It is instead a reflection of the strategy of Boko Haram of attacking prisons to release prisons.  May we perhaps also conclude that most Muslim fundamentalists are also criminals?  Phoooo - sharp intake of breath ...

More than 2,000 prisoners have escaped over the past five years in Nigeria, officials say, mainly as a result of attacks on jails by the Islamist militant Boko Haram group.

They say that dozens of prison staff have been killed during the raids.

Last month hundreds of prisoners escaped when jihadists overran Mubi town. This week they blew a hole in a jail in Kogi State to free dozens more.

Almost 500 prisoners escaped in the city of Maiduguri in 2009.

A total of 2,251 prisoners have got away and most of them are still at large, officials say.

Figures released by the Nigerian Prisons Service show that as of 30 June there were nearly 57,000 male and female prisoners in 239 jails.

The BBC's Will Ross in Lagos says that the jihadists have recently attacked a French cement plant in northern Nigeria and seized a large supply of dynamite - so more jail breaks may be on the way.

Of course, none of this would have happened, if all the criminal scum had been executed.  PHOOOO - even sharper intake of breath!

I read that the fight with Boko Haram is running into difficulties and the headline yesterday from the NYT seemed very defeatist. On reading the article I came across this paragraph which explained much.

‘One recent night, Boko Haram fighters ambushed a patrol that had sought to leave Chibok, the town where the girls were kidnapped, killing 12 soldiers. The next day, when the bodies were brought to the Seventh Division — the main army unit taking on Boko Haram — soldiers angry about the loss of their comrades opened fire on the car carrying their commanding officer, Maj. Gen. Ahmadu MOHAMMED, as he was heading to an armoury.’

Am I racist by feeling that no country can trust its fight against a Muslim insurgent army to a Muslim General?!

A friend from Nigeria assures me that the name 'Maina Ularamu' (see below) is a Muslim name.  So a Muslim is telling the families and friends of murdered Christians to be calm in the face of terror by Muslims.

'Suspected Islamic extremists used explosives and heavy guns to attack a village and worshippers during a Christian church service in Nigeria's northeast, killing at least 99 people and razing hundreds of homes, officials and witnesses said Monday...'

More interfaith outreach and mutual respect. "Hijab: School principal, teachers beaten to a pulp in Osun," by Oluwole Ige for the Nigerian Tribune, November 26 (thanks to Pamela Geller):

There was confusion in the ancient town of Ejigbo in Osun State, on Monday, as the principal and some teachers of Baptist High School were beaten to a state of coma.
The incident, which occurred around 8.00 a.m, heightened tension in the town as many were apprehensive that the crisis might snowball into a clash between Christians and Muslims in the town.

Trouble ensued when some unknown persons invaded the office of the principal, identified as Mr Layi Oguntola, where they made some enquiries and subsequently pounced on him, beating him to a pulp.

Our correspondent was informed that the school authorities had, last Friday, sent a female student home for allegedly using veil (hijab) while in the school, a development which infuriated some Muslims.

But Muslim youths in the town mobilised themselves and stormed the school to demand an apology from the school principal, and when he refused to grant their demand, he was malhandled.

Similarly, some teachers were also attacked by the irate youths with dangerous weapons, such as axes, cutlass and charms.

Worried by the incident, the Ogiyan of Ejigbo, Oba Omowonuola Oyesosin, was said to have intervened and ordered that the principal and other affected teachers be moved to his palace to ensure their safety.

Baptist High School, Ejigbo, was a missionary school, but the school reclassification programme of the state government had affected its nomenclature, as students from other schools were merged with students of the school.

About two months ago, similar incident had occured at the Baptists Girls High School, Osogbo and Baptist High School, Iwo, where some Christians protested the merger policy, leading to chaos.