The EDL will be holding a national demonstration in Batley .

RSVP for EDL Demo in Batley Yorkshire to add comments! 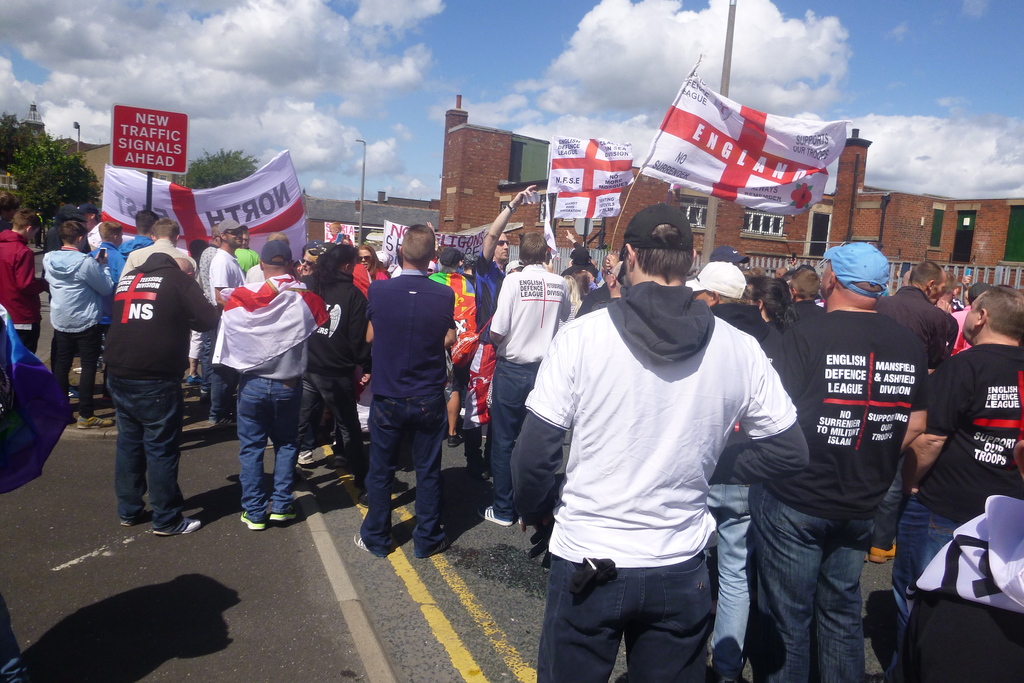 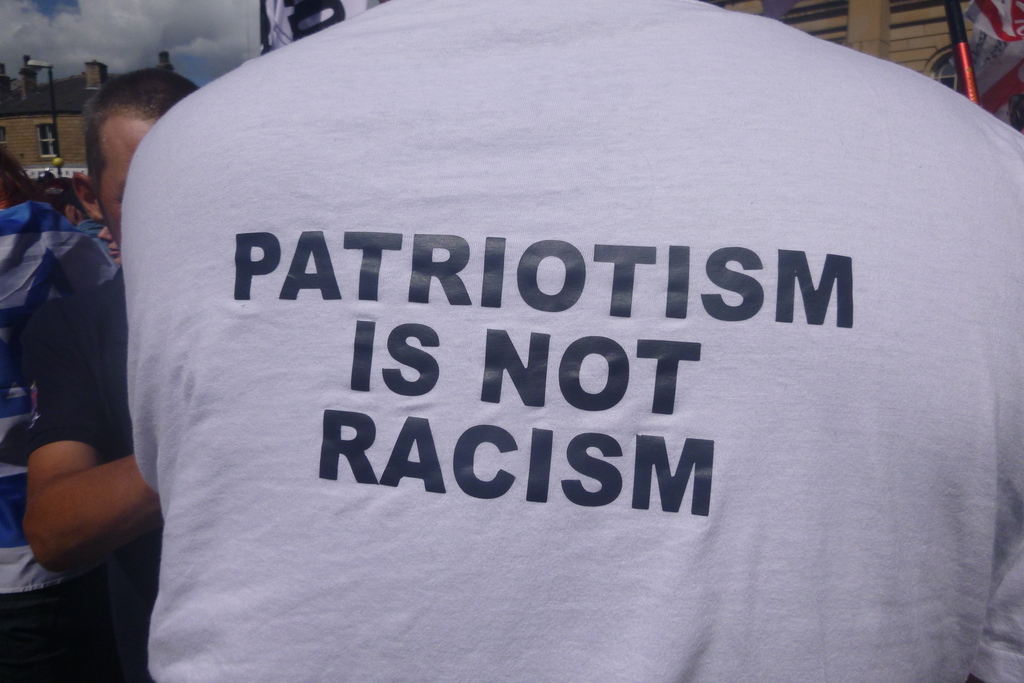 The EDL Demonstration yesterday in Batley, Yorkshire, was another shout out for freedom from the Sharia-pushers and their collaborators both in and out of Government.   I learned yesterday that apparently Yorkshire is ‘God’s county’!  The resistance to the influence of Islam in this ‘green and pleasant land’ continues.  For a few hours yesterday a free speech zone was created and the truth about Islam was spoken of in public.  We continue to go forward with renewed strength and resolve.  Here are a few pics which will give some flavour of the day. Comment by Kinana on August 10, 2014 at 23:04
Here are the YouTube links for the Batley Demonstration, please pass them on to all the walls.

EDL Demonstration Batley with handful of UAF opposing them
http://youtu.be/E2q-_u3CsNo

Hundreds of police officers from West Yorkshire and beyond will be drafted into Batley on Saturday (Aug 9) for a rally by the right-wing English Defence League....

I look forward the day when a headline says: ‘Police drafted in to protect the EDL from fascist, racist and anti-liberty Protesters’

Thank you for your patience.

After weeks of negotiations and planning by the Yorkshire EDL Division these are the final details for the demo in Batley saturday 9th August.

Those arriving by coach minibuses and cars should head for Wellington Street car park WF17 5RH from 11.00am.Those arriving from 11.00am at the train station will be met there by EDL stewards. People will be directed then to the Wellington pub or Batley WMC which the police have designated for us to use.

At approx 1pm we will gather outside the above pubs.We will then march from Wellington Street to Market Place arriving at approx 1.15pm via Commercial Street.Then as promised the speeches will be heard outside the Town Hall.

At the conclusion of demo EDL supporters will leave using buses and coaches that will be positioned on Commercial street.

Come and make your voice heard in the "Islamic Republic of Batley".

WHY WE ARE GOING TO BATLEY

Old photographs of Batley demonstrate the community spirit evident in the civic buildings, the security evidenced in the crowded streets, the prosperity demonstrated by the many mills and the happiness, confidence and security in school class photographs taken before the changes of the last couple of generations. The faces of those happy children posing for the camera would make any English person proud and brings home to us what it is that the English Defence League is defending about England.

What We Want From Our National Demonstration in Batley

We didn’t need to worry about ‘community cohesion’ a couple generations ago. We had it in spades. There was no need then for an English Defence League. But now we see a fracturing of community spirit, poverty caused by globalisation, the anxiety of an unsafe urban environment and declining confidence in schools. These are among the reasons the proud people of Batley have invited the EDL to help bring their issues to the Kirklees Council, to their officials and to the government as a whole. Among our hopes are that:

the education decision-makers responsible for Batley do not sit on their hands while the English school system is eroded on their watch – as the education authorities did in Birmingham
the welfare service decision-makers responsible for Batley do not turn a cowardly blind eye to grooming gangs – as the welfare decision-makers did in Peterborough, Rochdale and Oxford
the council and the MPs respond to the needs of their English constituents, even though those constituents may, in their English way, ‘not want to make a fuss’ in contrast to Islamic pressure groups whose style is to take advantage of English reticence to make a fuss – stridently and without giving quarter. Again it was a council – Birmingham Council – that recently apologised for its neglect in the ‘Trojan Horse’ schools scandal.
Who Will Be at the English Defence League Demo in Batley?

At this national demonstration, we will not all be locals. English supporters of England will be in Batley to support their English fellows. The EDL is proud its events demonstrate the community spirit of England. We are better at exemplifying British values than a Prime Minister who talks about British values, but who praises an alien faith that is committed to overturning those values to suit its primitive ideology.

Also at this demonstration there will be Batley locals who are not members of the English Defence League: many of them curious to see an EDL demonstration and to see and hear our case. Our demonstration will be peaceful, but we know – from leaked documents – that left-wing thugs are planning to disrupt our march. They have already begun a campaign to frighten Batley residents and business owners into opposing our march and silencing our speakers. Those people of Batley who have an open mind will welcome our message – if the opponents of free speech allow them to hear it uninterrupted. We welcome supporters to march with us. We welcome the curious to hear our speeches at the end of our march.

One of our slogans is: ‘Not Racist, Not Violent, No Longer Silent.’ We ask all English patriots to join us and refuse to be silent in the face of the threats to this green and pleasant land.

WHY WE ARE GOING TO BATLEY

The EDL’s national demonstration in Batley on Saturday 9 August is our fifth for the year, following Slough, Peterborough, Rotherham and Middlesbrough.

Almost a year ago, we were in Tower Hamlets and this week we hear that the High Court has ordered that the trial for vote-rigging of Lutfar Rahman, mayor of that Islamic enclave, should go ahead.

In Slough, Peterborough, Rotherham and Middlesbrough our visits were in response to invitations from locals who asked our support to help publicise the unwanted spread of mosques, child grooming gangs and the acquiescence in their activities by local authorities and police decision-makers. Our national demonstration in Batley is, just like earlier demonstrations, to support the locals who are at their wits end on how to preserve their English community and expectations in the face of the Islamic onslaught.

Onslaught? For the smug and comfortable people who live in peaceful, prosperous suburbs or who commute from leafy home county villages, whose only news comes from the Guardian, Radio 4, national television news and scripted documentaries, there is no onslaught. For those whose knowledge of English society comes from sociology textbooks, chic novels and student organisations there is no onslaught.

But for EDL members and supporters, whose daily experience includes overcrowded doctors’ surgeries, special requirements for non-English pupils in their children’s schools, uncertainty about halal meat, knowing someone in their neighbourhood has been the victim of a grooming gang and who hears other similar experiences when in the local pub, it feels like an onslaught.

Churches that are now mosques, high street family-run businesses replaced by kebab shops, drug dealers and pushers, taxi drivers who cannot be trusted, Muslims declaring once-familiar streets to be ‘no go’ areas, concerns that local schools may be heading in the direction of the infamous ‘Trojan Horse’ schools – all these, and more, feel like an onslaught, especially for our elderly.

Every week local communities ask the English Defence League if they can have an EDL demonstration to highlight their problems. We receive far more invitations than we can accept. The local communities play a big role in our demonstrations, of course, negotiating a route with the police, traders and councils. To this quiet and orderly process, the communities then have to go through weeks of harassment from a handful of well-funded negative elements who run a scare campaign with shops and pub owners about our demonstration. But once we decide to come and support a community, that’s what we do.

And now we are coming to Batley, slap bang in the middle of West Yorkshire. Almost half of Batley’s population being Muslims or from Muslim families, we appreciate the pressures on the native English majority as they attempt to be polite and welcoming, but find little by way of reciprocation among the recent arrivals.