Permalink Reply by Alan Lake on August 12, 2020 at 16:02
His name was Ryan Whitaker. There will be no riots for Ryan. No cities burning. No caskets paraded around the country. Remember the name Ryan Whitaker the next time career criminal George Floyd is mentioned. 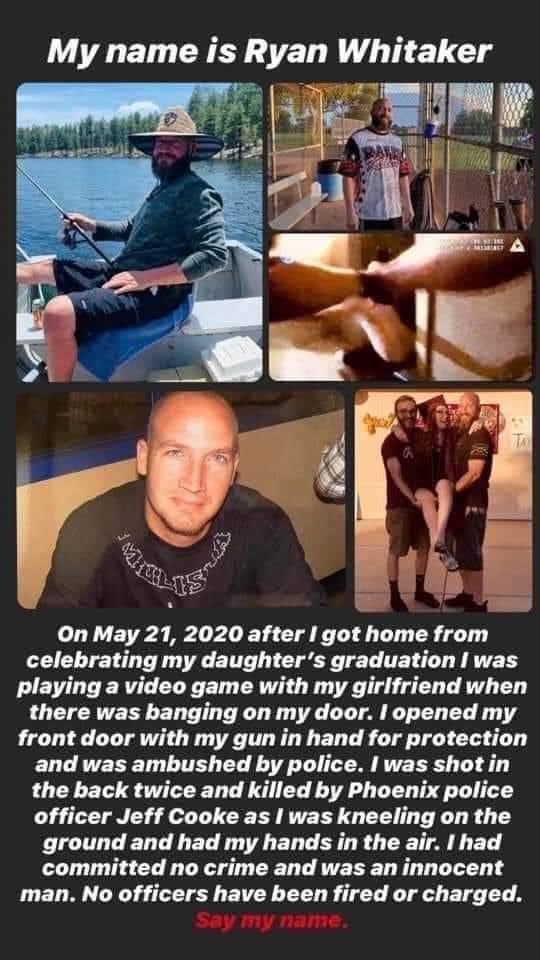 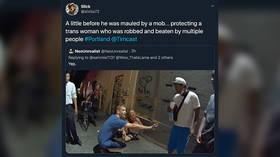 Screenshot © Twitter / slickp72
Online commentators are outraged and disgusted after video of violence from Portland was shared online purporting to show protesters robbing and assaulting an apparent white trans woman before beating a white man unconscious.

The disturbing footage purports to show a prolonged and extremely violent series of street attacks by a group of alleged BLM protesters against various individuals. The attackers were described as “a roving gang of blm thugs” while others said they actually stood for “Beating Looting and Murdering.”

The spate of violent gang attacks apparently started when a white person described as a trans woman was robbed and beaten by a group of people.

The woman apparently had her bag stolen by the group after she threatened them with a telescopic baton. She was then physically assaulted and verbally harassed multiple times throughout the night.

A man who tried to defend her apparently angered the crowd. That man and a woman he was with were involved in another act of violence, according to videos posted on social media.

The footage shows the woman being brutally beaten. After being threatened and struck several times, the male driver of the pickup then drove the truck at high speed to escape the mob, but crashed into a nearby light pole shortly before 10:30pm local time, at which point he was dragged from the vehicle and beaten in the middle of the street.

Some online claimed that the man had attempted to run protesters over with his vehicle, but there has been no official confirmation of these claims.

As the man sat on the ground while being verbally berated and punched in the head by the mob, a person ran up behind him and kicked him in the head, knocking him unconscious. Some among the group rifled throughout the contents of the truck as the man was being beaten.

Warning: The following footage is extremely graphic and some may find it disturbing.

The incident occurred just blocks away from the federal courthouse, the epicenter of protests ostensibly against systemic racism and police brutality but which have descended into riots and violence on a nightly basis for 81 consecutive nights.

Sickened by the ongoing and escalating violence in the city, some online called for the military to intervene while others called on “decent people” to leave the city so that the rest of the country could seal it off. 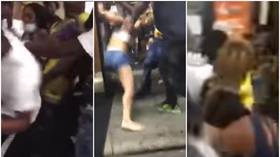 A violent mob of over 30 people brutalized a black transgender woman as she attempted to seek shelter in a Minneapolis convenience store after getting in a car accident. The attack has further fractured the community.

Iyanna Dior was swarmed by more than 30 people on Monday night in a violent attack captured on video. The assault reportedly stemmed from a car accident and has escalated tensions in the community, with LGBTQ advocates and many others denouncing the apparent hypocrisy of a crowd of black men and women attacking one of their own even as the city is gripped by protests against racism and police brutality.

Dior is seen taking refuge behind the counter in the store and briefly taunting her assailants, who hurl abuse back, reminding her “you gotta come out!” After surrounding her inside the shop, they continue the onslaught, demanding she “get [her] f****t ass out the store!”

While she later posted on her Facebook page that she was "OK," showing photos of some of her bruises, many on social media have called for the perpetrators to be arrested or otherwise punished - including the bystander who filmed the attack. "It is not acceptable for groups of people to stand by and watch and record an individual being attacked and beaten by a group of people and do nothing," Texas black and LGBTQ advocacy organization Abounding Prosperity said in a statement on Tuesday, condemning the "brutality being inflicted by black men and women on its own."

Darwin to be cancelled ; https://www.rt.com/uk/500027-darwin-museum-colonialist-offensive/