The following is from my old blog Illustrated Pig to Islam

A HARD LOOK AT RACISM You are about to see exactly how Robert Mugabe and his ZANU / ZANLA thugs terrorised and frightened the unwilling tribespeople of Rhodesia into "supporting" him and, in 1980, voting for him whilst the British observers turned a blind eye.

To borrow a phrase from famous Russian composer Sergei Rachmaninov when describing Stalin:

Mugabe is a professional murderer.

Surviving tribesmen, missionaries, terrorists admissions and ballistic evidence confirm that all this brutality was committed by what Britain and America called "freedom fighters" and what we called by their true name: terrorists.

Do NOT view this page any further if you are squeamish or feel unable to face the facts! December 3, 1975  A terrorist gang cut off the ears, nose and chin from Chikombe Mazvidza of Kandeya Tribal Trust Land. They then forced his wife to cook and eat the flesh. A burning ember was thrust into his mother's genitals and two other locals were also assaulted.  His five children and 60 villagers were forced to watch. 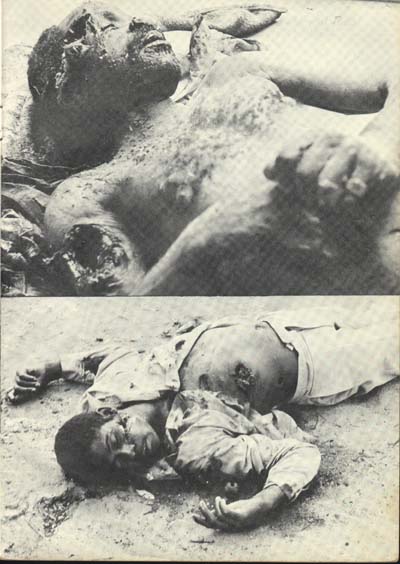 28/10/1973: Mr. Mkambe Chiqueqwete, repeatedly shot by terrorists at his village. Twenty-three cartridge cases of communist origin were found at the scene. Motive unknown. Bottom Photo: 16/04/1974: Four terrorists took Mr. Albert Chigumbuza from his home in the Rusambo area, accused him of being a "sellout" and shot him 15 times. There was absolutely no connection between Mr. Chigumbuza and the authorities. 30/01/1974: Anna, an innocent woman, whose upper lip was pulled with a pair of pliers, and hacked off with a rusty bayonet by terrorists. 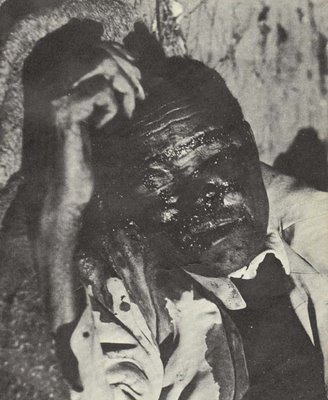 Here is a page you can read which will give you an idea of many terrorist acts for which not photos are available. The list below could continue on and on for the next seven years. This is how Robert Mugabe came to power. These were their tactics. Read, and be disgusted. Ten terrorists approached him, accused him of being a "sellout", tied his hands behind his back and shot him. They then shot the 14 cattle which represented the entire village's worldly wealth and then set fire to the village. 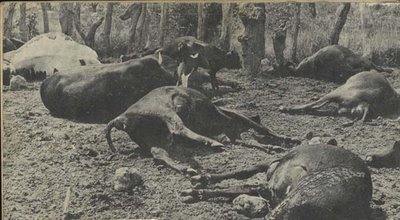 In June 1978, terrorists killed 8 British missionaries at Elim Mission. They also killed 4 young children and a 3 week old baby. Note: These missionaries were at a mission station which was dedicated to helping and uplifting the black people. Two children and a woman, killed at Elim Mission in the Vumba Mountains, Rhodesia, by guerrillas during the Bush War. This photograph shows the bodies of two of the children, Rebecca Evans and Joy McCann, together with one of the women, Mary Fisher.

Description below extracted from

The Murder of Missionaries in Rhodesia,

published by the Rhodesian Ministry of Information in July 1978.

On the night of June 23, 1978, Elim Mission in the Rhodesian Eastern Highlands was subjected to the worst massacre of missionaries yet experienced. Terry Blocksidge reported in the Sunday Mail (Salisbury):

Eight British missionaries and four young children - including a three-week-old baby - were bayoneted to death by terrorists on Rhodesia's Eastern border on Friday night in the worst massacre of whites since the six-year-old war began. Three of the missionaries were men and the others women. A sixth woman was stabbed and beaten and left for dead. She staggered 300 m into the freezing Vumba bush to spend the night before being found semi-conscious by security forces yesterday. Despite intensive care in a Salisbury hospital she subsequently died. The gruesome murders, by a group of eight to 10 terrorists, happened at Emmanuel Mission School - 15 km south-east of Umtali and 8 km from the Mozambique border - once used as the Eagle boarding school. The dead, who belonged to the Elim Pentecostal Church, were:

Most of the women had been sexually assaulted, and one mutilated. The children had been dragged from their beds. Two children were in yellow pyjamas, one with a red dressing gown, and a third in a flowery nightdress. Mr. Brian Chapman, director of the Church in Rhodesia and South Africa, visited the scene yesterday. He said: "We saw no humanity here." The massacre began shortly before 8.30 p.m. when the white families were forced by the terrorists from their homes and classrooms, and marched to a playing field. Near the sports pavilion, about 400 m from the main school, they were split into groups, then beaten with lengths of wood and logs, and stabbed. A mother, beaten to death, lay with her young baby. The baby had also been savagely beaten. The mother had a hand squeezed tightly around her engagement ring, turned into her palm, as she reached for her baby in her dying moments. Nearby, another woman had died from an axe-wound - the weapon still protruded from her shoulder - and two men, one with his hands tied behind his back, lay beaten and slashed to death. A blood-soaked chunk of wood had been dropped near to them. Three children lay in a pitiful huddle, with two women's bodies next to them.

ZANU "freedom fighters" herded men women and children into a hut, then set fire to the thatched roof. 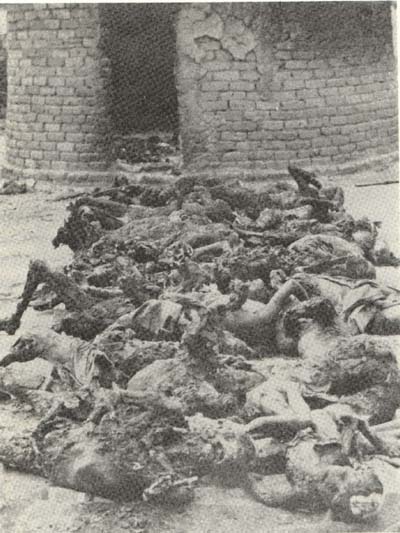 The 26-hut kraal was a scene of devastation - all had been gutted.  Goats and sheep were burned alive in their pens. The pitiful charred remains of a baby - one of 23 people who died agonising deaths when terrorists herded them into a hut and set it alight. Wild dogs or a hyena had dragged it from the hut and chewed at the remains.

This is why Mugabe is a hero of the Leftist slime.

And of course Shiva, they will call you a racist for posting it.

At least its not involving Muslims, or they would kill anyone that "offends" them by reminding them of the atrocities they've committed, both now, and since the time of Mohammed.

So here it is Ho Ho Oops I seem to mislaid the last part to this some in my HD, but believe me it was every bit as gruesome.

I know that there is no mention of Muslims or Islam. But if i recall correctly, former Rhodesian Prime Minister Ian Smith in an exclusive interview with BBC News 24's HARDtalk (Tuesday 7 May, 10.30pm) he tells HARDtalk's Tim (sellout) Sebastian that is was one of his fears

There are many lessons from this brutality.  Clearly, Christianity and Buddhism are extremely dangerous philosophies, as they encourage you to become a vulnerable child, with a reward in heaven.

Also, secular tolerance and 'fairness' is a poisoned chalice.  If you are too tolerant and struggling too hard to be fair, you will let a thug like Mugabe muscle his way into the society instead of being shot while you still can.  I blame the fascist left for a lot of this inhumanity.  In their insane desire to show themselves as somehow morally superior to everyone else, they are determined to let the wolf in amongst the sheep.