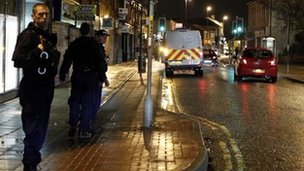 Groups representing Sikh and Hindu communities have complained about the term "Asian" being used to describe the men involved in grooming trials.

Earlier this month, nine men were jailed for being part of a sex ring in Rochdale which groomed girls for sex.

The groups said the men involved were "almost always of Pakistani origin" and the term "Asian" was inaccurate.

The Ramadan Foundation has said grooming is "a significant problem for the British Pakistani community".

The joint statement was released by the Network of Sikh Organisations UK, The Hindu Forum of Britain, and The Sikh Media Monitoring Group UK.

It says the reluctance of the media and the government to discuss the "disproportionate representation of Muslims in such cases" and the fact victims are "almost always non-Muslim girls" is adding to the cause of far-right groups such as the BNP.

It said blanket use of the word "Asian" was "unfair to other communities of Asian origin".

"We believe that in this case the government itself is sanctioning the use of term Asian as a way of clouding responsibility," the groups say.

The groups say sex gangs have targeted Hindu and Sikh girls but the cases are rarely reported as they seldom reach the courts.

The statement says: "We believe that political correctness stifles debate and will not facilitate a frank and mature discussion or solutions to get to the root of why the above pattern is emerging in these crimes and how to help find a solution to the problem.

Last Week Mohammed Shafiq, chief executive of The Ramadhan Foundation, said: "There is an over-representation [of Asian men] amongst recent convictions in the crime of on-street grooming [and] there should be no silence in addressing the issue of race as this is central to the actions of these criminals," he said.

He said community elders were "burying their heads" over the issue and police and local councils should not "be frightened" to address the problem, as there was "a strong lesson that you cannot ignore race or be over-sensitive".

On Monday, the chair of the Equalities and Human Rights Commission, Trevor Phillips, said the race of the men involved could not be ignored and it was "fatuous" to deny racial and cultural factors.

But assistant chief constable Steve Heywood, of Greater Manchester Police, said the case was not about race, but about "adults preying on vulnerable young children".

Liverpool Crown Court heard the nine men plied their victims, one as young as 13, with drink and drugs so they could "pass them around" and use them for sex.

This has been an on going problem for years. Shifting any sort of blame from muslims and pakistani muslims espescialy, and heaping it on other groups. Asians come from  Asia, a massive continent, if people can't work that out then our schools may as well shut!. Asian can mean chinese, malay,indo,indian, i'm sure i don't need to go on.

It is mainly the muslim groups that are causing the problems and devisions in countries they've  emmigrated to. In britian a large proportion of the muslims are pakistani. In france they are north african. This is because of historical ties from our respective empire days. Thats not to say there isn't problems with chinese gangs, and eastern european gangs, but to be honest they are just criminals, and are not trying to take over our society and replace it with a murderous cult.

The majority of criminals require our society to function, so they can earn money, and enjoy their 'profits' within a western culture.

Islam and it's followers are behaving in a way that is perfectly legal from their perspective.  Having sex with young girls is ok for them, and having sex (or raping as its commonly known) with young infidel girls doesn't bring any kind of shame or social stigma to the men involved. It is true to say that the shame in the eyes of the muslim community belongs to the girls instead.

This attitude is not taught within the hindu community, or the sikh community or any other community that i can think of. The age of marraige is lower in many other countries as is the age of consenual sex, but this is not whats going on here with the grooming gangs, and its not whats going on in other muslim dominated countries where non muslim girls are kidnapped raped murdered. The muslims are quite prepared to murder their own children for honor reasons lets not forget. One of the reasons for murdering them is for falling for the wrong boy. A christian boy for example.

Of cause other 'asian' groups are fed up with the media reporting that its them that behave like this. They know full well who the culprits are, and they full well why. The Koran and the hadiths teach and encourage a behaviour most of the world finds totally disgusting and sub-human.

Acid attacks on defenceless women, the tormenting and raping of young girls, the stonning of women, the beating of women, honor killing of women. Was there ever a so called religion so repugnant as islam that so hated and dispised women as islam!! i don't think so!!.

By not identifying whos committing these savage barbaric acts against little girls and by trying to blame it on decent religious groups we are showing the islamic groups world wide that we are weak, and defeated, and our country is open to them and their never changing barbaric cult.

YOU as a non muslim european wouldn't dare slap your child in public!! And yet we allow islam to teach violence to girls, women, gays, jews, christians, athiest's, and dogs!, Their holy book of peace is nothing of the sort, their religious leaders preach nothing but hate and the dedicated followers of islam will convert you, toment you or kill you!

How much longer are we going to allow the blame for islamic crime be blamed on hindus, buddists, sikhs and Asians, before we open our eyes.  I'm glad other asian groups are speaking out. I stand with them.