On Sunday, a police horse did not survive the grim attack by the extreme left in Nijmegen. The horse died while protecting Pegida marchers. A police officer was also wounded, according to a spokesman for the police.

The announced Pegida demonstration attracted some hundred counter-demonstrators to the city center of Nijmegen, in the Netherlands. At an asylum seekers’ center, where Pegida supporters had gathered, the police drove the demonstrators apart.

The police force, massively present, had to form cordons with horses and vehicles to prevent both Antifa from attacking the peaceful marchers.

The approximately twenty members of Pegida were allowed to walk around the edge of the city center, but were outnumbered. The police prevented a charge by their far-left violent opponents who had wanted to disrupt the anti-immigration march.

The police horse died during the tense standoff, collapsing due to heart failure near the Tunnelweg, close to the Central Station, the police confirmed.

The horseman survived the fall, but the horse died on the spot.

A counter-demonstrator who threw smoke bombs was arrested. A man who could not identify himself was also arrested. 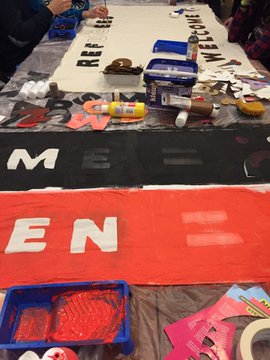 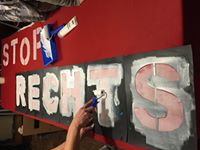 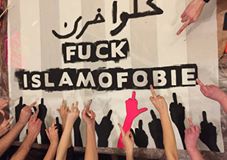 A police horse was attacked by an Antifa demonstrator in a similar incident this year during a demonstration in Harrisburg, Philadelphia.

During a demonstration at the Pennsylvania State Capitol Complex in Harrisburg against Sharia, the attacker drove a spiked pole into the neck of the animal.

According to Antifa on their South Jersey ANTIFA Facebook page: “A comrade was arrested while trying to demonstrate against an anti-Muslim rally in Harrisburg, PA. The charges are entirely fabricated and do not reflect what actually happened during the incident. […] It is clear that this person is being held as a political prisoner, and we must make it known that we will not be intimidated by a militarized police, that we will remain resolute in standing by the values of our movement, and that we will continue to combat fascism wherever it attempts to spread.”

All rights reserved. You have permission to quote freely from the articles provided that the source (www.freewestmedia.com) is given. Photos may not be used without our consent. 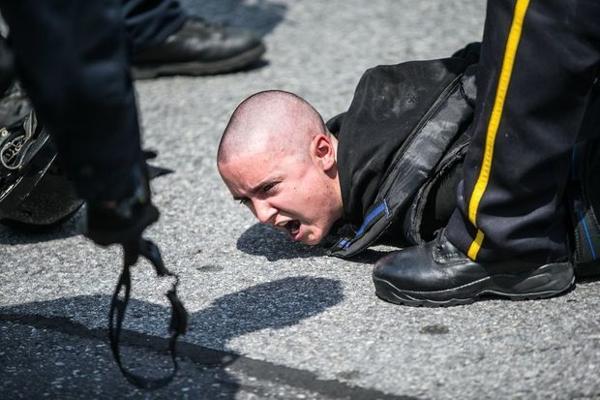 While the defense argued that Lisa Joy Simon, 23, of Philadelphia was protecting herself and that her flagpole was not a weapon, her charges have been bound to county court. She is accused of hitting the horse during a protest in Harrisburg last month. (PennLive)

HARRISBURG -- Trooper Wes Vanwyk, who has worked with horses for 16 years, was called to the Capitol with several other members of the Pennsylvania State Police's mounted unit last month.

As he waded through the crowd on his horse, Sampson, during the "March Against Sharia," 30 or 40 members of a nearby counter-protest rushed out of their designated area, filling up the streets, he testified today.

Following orders from command, he and the other mounted units started pushing the protesters back to the sidewalk. Most were complying, he said.

But there was one who stuck out.

"As I looked down from the horse, I saw someone dressed all in black," he testified.

Black hoodie, black mask and black goggles, carrying a 3-foot stick with a black flag. And sticking out of that flagpole, he said, was 1-inch nail.

What happened next was the subject of a hearing today before Magisterial District Judge Sonya M. McKnight. Did the protester hit Sampson with the nail-end of that flagpole, or was the protester acting defensively against the horse?

McKnight found there was enough evidence against the protester - Lisa Joy Simon - to move all charges on to Dauphin County Court.

Investigators say Simon is with the AntiFA group, which was protesting the "March Against Sharia" June 10 at the state Capitol in Harrisburg.

At today's preliminary hearing, Vanwyk testified he was directing the crowd back to the sidewalk when his horse's shoulder bumped into the masked Simon.

Simon looked up at him, swung the flagpole, and hit Sampson in the neck, he said.

"My horse pulled his head to the left in a violent fashion," he recalled.

He later checked his horse for injuries, and though he did not find any blood or a puncture wound, he knew from working with horses for nearly two decades that Sampson's reaction came from getting struck with the nail.

Jostled in his saddle, Vanwyk reached down and grabbed Simon by the backpack handle, but the crowd started dragging Simon away. The trooper kept his eye on the black-cloaked figure and said he motioned for a Harrisburg police officer to arrest Simon.

Several officers did and removed the hood and mask, allowing Vanwyk to identify Simon.

But did Simon really attack the horse? And was that flagpole really a weapon?

That's what Simon's attorney, Mary Welch, argued. As the trooper was using his horse to push back the crowd and ran into Simon "It is as likely she was protecting herself," Welch argued.

Additionally, a flagpole does not fit the legal definition of a weapon, and Simon's actions were merely "one swipe of a flag," and not an assault on the trooper, she said.

But Assistant District Attorney Kayla Bolan countered that the flagpole was indeed a weapon when used in such a manner, adding Simon intended to injure the trooper, who could have easily been thrown from the horse.

The judge agreed there was enough evidence to support the prosecution's argument and bound the charges over to county court.

Simon did not wish to comment after today's hearing.