Another opportunity for the west to STOP this madness.

The magistrate in this case MUST not let this woman wear her Burqa in a western court, send her back to shitholistan if that is what she wants but don't impose your unacceptable custom on our cultural and judicial process.

Well thats all nice and good but when I wrote an e-mail to the Prime Ministers office about this very subject and other subjects that are a concern to Australians this is the reply that I received  from her office: 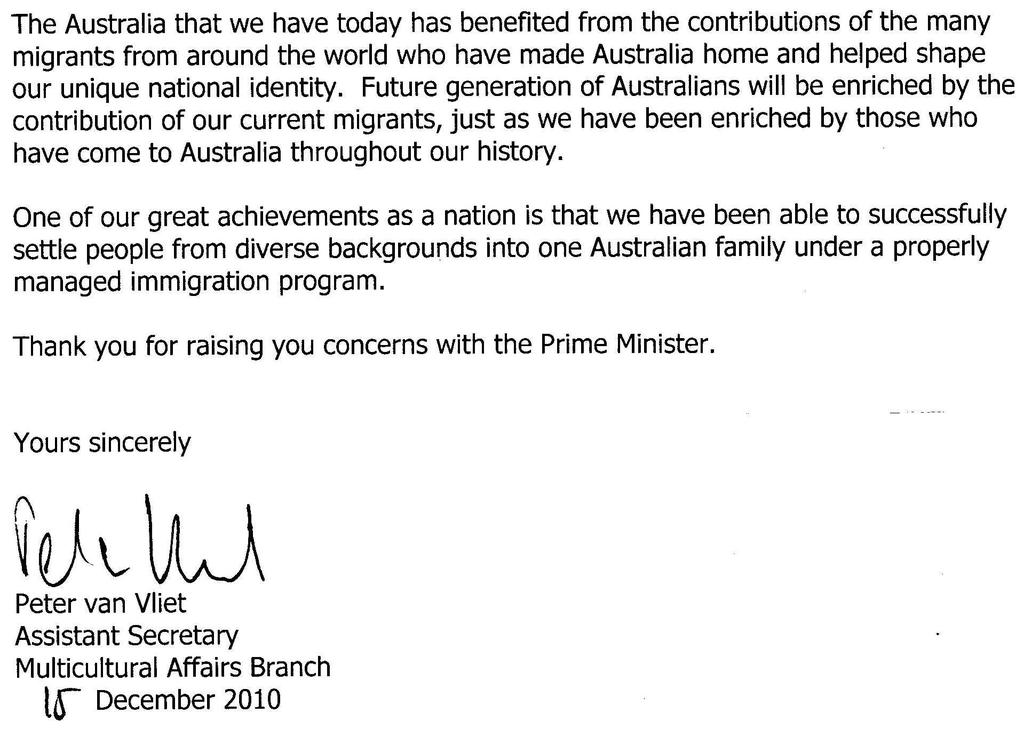 Is this the reply your the constituent expected Well unfortunately this is the reply you got. The current government is not prepared to stand up for us on these and other issues like this. So the question begs asking, are we going to sit here and take this or are we going to get out of our comfortable homes and let this government know who is in control. I am speechless to say the least.

Permalink Reply by steven patrick on December 28, 2010 at 16:50
Seriously im uneasy at the fact that not only is europe hovering over the abiss of islamification but the two last bastions of hope for democracy and salvation are following in its dhimmi footsteps (USA & AUS).There is no longer anywhere to run as every inch of the planet is being targeted for the spread of islam.Many sleepless night ive spent thinking about this and im sure you all are sharing my concerns on this matter.No longer is the future a sure thing.........

As I see it, he spread of Islam into Western Society is only one facet in the de-stabilisation and de-moralisation of our society that ultimately will lead to a crisis.

America, under its current leadership, is marginalising Israel and cozing up to the Muslim world and the crisis could well occur if Israel attacks Iran.

I would suggest you paste the following link into your browser and have a look:

With a dangerously exploding global population now afflicting the earth with the virus called, “Humans”, a situation that at least publicly, the world’s leadership is not prepared to
meet head on and in fact to the contrary, here in Australia we are constantly
bombarded with the astounding misguided belief that this Nation needs to expand
its population by tens of millions to stay economically erect and sustainable.

Australia, a nation that only a decade ago a prominent visiting population expert from the USA was asked by a journalist during an interview, “What do you believe is the
appropriate level of population for the Australian continent?” His reply was;

“As this country has almost completely populated the only real productive lands of this Nation, this being the coastal fringes, I believe 13 million people is a reasonable level.”

As Australia at that time was a quite a few million beyond that 13 million mark, the journalist asked how this depopulation might be achieved and the expert
replied, (tongue in cheek) “I would start culling.”

A nation that today where, so called illegal immigrants, lie and cheat their way to the head of the refugee queues, so as to enter at any cost. The bureaucracy admits these free loaders with glee, as they
soon become minions of the legions and further serve the master’s grand plan.

Our political leaders are so enamoured with the vision of a place at the broad swill table of the latest attempt at One World Government, (The League of Nations was the last) “The
United Nations,” that they are only too willing to sell their souls out, along
with their own sovereign citizen’s (masters) independence.

We have made laws that give Authorities immense power over Society’s every intricacy.

We have signed away this nation’s rights and usurped our sovereignty, for quasi United Nations’ Rule.

We have all but destroyed the ethnic makeup of this Nation to a point that it has all but gone from being a stable population mix, to one of unbelievable instability through extreme
ethnic diversity, with the now almost inability of reversibility.

We have governments that unconstitutionally ignore the laws of this land in favour of legally non-binding global treaties.

We have allowed the wealth of this nation to be owned by global corporate entities, hence the profits and wealth of this Nation slowly dissipates overseas.

We are allowing our Nation’s health to be put at risk by the unnecessary trade deals being brokered for political expediency, thus allowing the importers to essentially circumvent
well established quarantine measures.

We have changed laws to allow international corporations to introduce and ostensibly pollute our pure grain stocks, with genetically modified seed experiments in a move to allow
private ownership of our plant food stocks.

We as a people have allowed our individual dollar wealth, to blind us as to our real Social and National poorness.

We have disarmed the population.

We are about to concede to the taxing of the Australian working populous, back to the stone ages on the scientific lie, that man made CO2 gases (emissions) cause global warming and
all without a referendum.

When a Nation’s politicians unilaterally decide our National health is purely measured, hence administered, purely as a result of our dollars and cents national trading figures, then we have a seriously
deficient leadership indeed, for even the economist (Kuznets),
the man who designed the formula for measuring a Nation’s GDP (Gross Domestic
Profit) after the great depression last century, stated, that measuring a
nation’s money, is not a measure of a Nation’s health, or words so
very, very close to that effect.

the arrogance and ignorance of that letter you received from the immigration office is breathtaking.  they know best so you lot just shut up and pay your taxes.

Well I have subsequently written another e-mail to the PM about the problem with immigration to this country. I basically told here that she needs to halt all immigration, illegal or legal from islamic countries. I am not expecting a favourable answer to that im afraid...

By the way I was surfing around the net the other day and came across this little gem of islamic hypocrisy. The person who shot this video was using thermal binoculars and I dont think he was very surprised at what he saw whilst on operations in Afghanistan. I have taken the liberty of spreading this as wide as I can all over facebook just to highlight the hypocrisy in this evil ideology.http://www.youtube.com/watch?v=dXZjG6EDcQI&feature=player_embedded

I wonder whether the animals are required to wear burqua veils now too since they are subject to rape by male muslims, do the animals need 20 witnesess to prove their case or would the one video be enough.... lol.