The future for people smugglers is bright in this region.

Thanks for the research, Dave. Useful info.

Yo Dave here is an example of the pain,piss and drama

AN IRANIAN refugee who sewed his lips together while on a hunger strike in Baxter Detention Centre is now suing the Commonwealth of Australia for damages.

Abdul Amir Hamidi came to Australia on a boat in June 2000 from Iran, where he had been imprisoned and tortured for several months.

Mr Hamidi, 35, claims his treatment by Australian authorities triggered a severe psychiatric illness, for which he will need supervision for the rest of his life.

In his South Australian Supreme Court statement of claim, Mr Hamidi says he was repeatedly physically and verbally abused by detention centre guards.

When being transferred to the Woomera detention centre in 2001, Mr Hamidi says he was left handcuffed and without water for up to five hours in stifling heat, as guards lunched at a roadside cafe.

Mr Hamidi claims he was denied access to a doctor of his choice after sewing his lips together as part of a hunger strike at Baxter in late 2004.

During his detention, Mr Hamidi swallowed shampoo and laundry powder, slashed himself with razors, hit himself in the head with rocks and tried to hang himself.

Despite his history of self harm, Mr Hamidi says he was denied psychiatric treatment for anxiety and post traumatic stress disorder.

Mr Hamidi says he was held in isolation cells for long periods, when "it should have been obvious that such confinement could itself cause or exacerbate psychological or psychiatric damage."

He was released from detention on Christmas Eve 2004, after the Federal Court ordered he be put into a mental health facility.

Mr Hamidi, who is now an Australian citizen, is the first detainee to launch legal action in South Australia.

In 2006, the same court awarded Iranian child Shayan Badraie $400,000 after the Commonwealth agreed to a settlement midway through a trial.

The Commonwealth has been given until later this month to file its defence.

He sounds like a wonderful, balanced person to have walking the streets when your children go out to play. How culturally enriching. Not.

Permalink Reply by shiva on June 28, 2012 at 2:22
This emotional vampire should be ignored

What skum, they prey on the the moonbats so as to win sympathy and support so as to stay in Australia. When they are finally allowed to stay, they are granted citizenship, but instead of being thankful and become like any other normal citizen. They continue to leach on the moonbats emotions like vampires sucking blood,and instead of working they want compensation for self inflicted wounds.

Nobody asked the parasites to come to Australia, if they are genuinely trying to get away from torture in Iran as they claim, why dont they stay in one of the many countries between Iran and Australia. They would not have had any problems getting into India, Thailand or Indonesia, no they choose Australia, because it is a soft touch compared to the other places. In India, Thailand or Indonesia they would have to work so as to survive, as there are no such things as social benefits.

You may think I am a callous bastard, well so be it. My sympathies lie with people who are not able to escape the horrors of islam. The people who do not have the money to escape and pay big hard cash like many of the so called refugees can. that ar able to pay large some of money for illegal transportion etc etc. Not like those who disfigure themselves so as to unattractive for moslem slave traders and rapists.
The Mursi (or Murzu) are a Sub-Saharan African nomadic cattle herder tribe located in the Omo valley in southwestern Ethiopia close to the Sudanese border. The estimated population of the Mursi is around 3900. Surrounded by mountains and three rivers, the home of the Mursi is one of the most isolated region of the country. 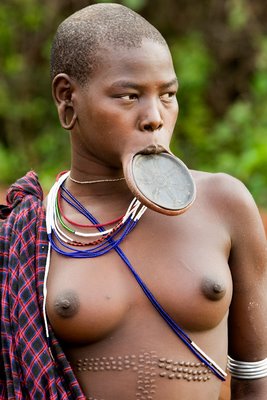 The religion of the Mursi tribe is classified as Animism, although about 15% are Christians. The Mursi women are famous of wearing plates in their lower lips. The reason of this "ornament" is for avoiding to be catched as slaves. These lip discs are made of clay. Girls are pierced in the age of 15 or 16. Also Sara women put the lipplates in both their lips to make themselves unattractive to Arab slave raiders. 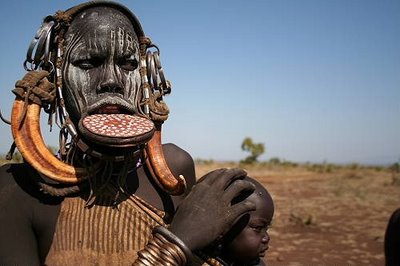