Yes, there has been another tragic incident with a Lone Wolf Muslim (LWM) performing a terrorist act in a peaceful Western city.  There are a lot of LWMs about nowadays, but never enough to make it a pack, it seems.  And of course, its NTDWI (Nothing To Do With Islam).

There were quite a few LWMs at this school in Beslan, Russia, but never enough to make a pack that could be held accountable. 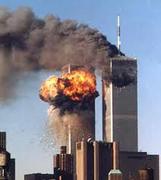 There were only a dozen or so LWMs involved in this minor explosion, so I guess we can't hold any identifiable group or ideology responsible for that.

Apparently there's a fair number of LWMs in Syria and Iraq at the moment, calling themselves ISIS or something, but still, its not enough to make up a pack.

Anyway, despite the fact that LWMs don't belong to any group, it seems we must respond to their actions by giving additional rights to the Islamic group.  Funny that, isn't it?  Especially since we are repeatedly told that LWMs are NTDWI.

a man identified as Man Haron Monis, an Iranian also known for sending hate mail to the families of fallen soldiers, was holed up with the captives. Authorities say Monis was shot and killed during the confrontation with police.

Oh, that's OK then!  I mean, its fine to send hate mail to the families of fallen soldiers, since that's Free Speech, innit?  The rights of a Muslim hate filled fanatic to a free speech he would never have in a stinking Islamic country, are far more important than the rights of the family that have given their son or daughter in the defence of that free country, yes?

But of course, if it were the other way round, if anyone was insulting the "holy" prophet or the "holy" book of the Islamic master race, then that would not receive protection as free speech, certainly not. The insulter would be slapped into prison for the tiniest infraction.  But of course, since us Kuffar are the "lowest of creatures", we have to receive lower rights according to Islamic apartheid law - sorry, I mean Sharia Law.

Look at the wording as well: "was holed up with the captives".  It makes it sound like the poor man was one of the victims, even though he's the one holding the gun to hostages' heads.  Its OK to insult soldiers families, but we mustn't risk insulting the Iranian Muslim that does that, by implying that he is anything to do with terrorism, until we have complete proof.  If we just assume that he's part of the problem, the Islamic legal team will be on us in an instant, to protect their 'brothers'.

The same thing happens with 9/11 and other terrorist atrocities, when leftards include the terrorist deaths in the total body count. The Muslim terrorist deaths do not count (because they were the perpetrators, not the victims)!  Dumb Leftards, confusing victims with their abusers.

What a load of decadent Western crap.

Gaps appear in "ride with me" meme hashtag ; http://www.theaustralian.com.au/in-depth/sydney-siege-backtrack-ove...

The body of the lone terrorist behind the attack on the Sydney, Man Haron Monis, is unlikely be receive a proper burial after Muslim funderal directors said his body should either be thrown in the sea or “chucked in the bloody sh*thouse”.

So far no-one has claimed the 50-year-old’s body, meaning that he would have a state funded funeral but this would be contingent on them finding a company willing to do it.

The Australian Daily Telegraph attempted to locate a Muslim firm willing to do the funeral and discovered that none were willing to be involved. Amin Sayed, funeral director at the Lebanese Muslim Association was particularly robust. He said: “We don’t care about him, we don’t know him, chuck him in the bloody sh*thouse.”

And incidents like this should be used by governments all over the world, to get muslims to abandon islam.

Where are the "moderates" and the "reformers" who are engaging the likes of this Lindt killer or Anjem Choudary on national TV debats, proving that the "fundamentalists" have got the fundamentals of islam wrong?  Nowhere -- because the fundamentalists would win the debate (I saw that with my own eyes when the gay UK gay muslim group were confronted with an audience where 30% where bearded fundies).

Why did not imams/sheikhs offer to take the place of the hostages?  During WW2 priests would offer themselves up to the Nazis in place of others being taken hostage.

The media is telling us that all these LWMs are actually self-radicalised, due to reading fundamentalist Islamic stuff on the internet (never from reading the holy holy scriptures of Islam, of course).

So we could call them SRLWM, or Self Radicalised Lone Wolf Muslims - but that acronym's a bit too long.

On September 23, Numan Haider was shot and killed outside a police station after stabbing two officers in the state of Victoria. He was found carrying an Islamic State (IS) flag.

Throughout September, in fact, Australian police conducted major anti-terrorism raids in Brisbane, Melbourne and Sydney. At least 15 people were detained, including Omarjan Azari – an alleged associate of Mohammed Ali Baryalei, leader of IS in Australia – who was planning to behead a random civilian in broad daylight. Just days after Monis’ attack, Australian authorities arrested two men on terror-related charges, including Sulayman Khalid, found in possession of documents designed to facilitate terrorism.

Monis’ was therefore not a random act, but rather part of a greater pattern of Islamic fanaticism in Australia.

Victor Hanson started highlighting NTDWI last year.  I should probably file this in a separate category, but it will have to do for now:

Nothing to Do With Islam