After burqa ban was overturned, 3 men dressed in a KKK hood, biker helmet and burqa attempt to enter Parliament in Australia

On the one week anniversary of the dumping of the federal Parliament’s burqa-ban, three men in costumes have attempted to enter Parliament dressed in various controversial garb. The costumes include a KKK hood, niqab and a helmet. The three men from the group ‘Faceless’ said they wanted to see the burqa and all facial coverings banned.

PARLIAMENT BACKS DOWN ON BURQA BAN NEWS AU  (h/t Bern) Just a week after the burqa ban was overturned, the trio had to identify themselves to security. “It’s fantastic that we were not allowed in,” one of them said, praising security.

According to 2GB reporter Stephanie Borys, who is at the scene, the three men were asked to take their coverings off. When they did, a black headress was revealed underneath. A large security presence, including AFP officers and parliament security have reportedly handled it well.

The three men allegedly plan to target a bank next. When asked how it would make Muslim women feel, they said they “couldn’t care less”, and wanted all burqas banned, full stop.

“It seems that you’re allowed to wear a full face covering into Parliament if you’re a Muslim woman but no other group is allowed to have that same privilege,” Sergio Redegalli said, wearing the KKK outfit.

Their head coverings were confiscated by security and handed back on departure. The next time another group is asked to identify themselves at a security point “it may be too late,” he added. “They’re already in Parliament.

“No one should be walking up the public forecourt or in the public domain hidden from sight.” The burqa should be banned for security and cultural reasons, the group argued.

After passing security and entering the Marble Foyer of Parliament House the trio left. “The reason we didn’t go any further was there is a memorial for Gough Whitlam. “The last thing we wanted to do was to interrupt that, there’s just certain things you don’t cross.”

Mr Redegalli said he has always been a voting Liberal. “They’re going to choke in there when they hear that.” 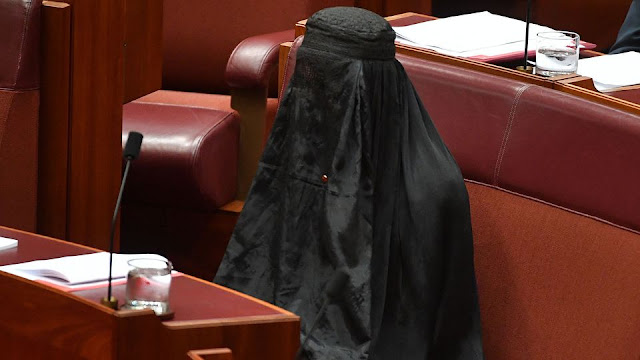 Pauline Hanson, the heroic Australian nationalist senator representing the One Nation Party, decided to make her point about the problem of creeping Islamization by turning up to work in a full Muslim burqa.
Entering the Australian Senate Chamber after it had filled up with her fellow senators, Hanson walked to her seat and sat down fully covered in black to make the point that burqas are not only fucking creepy but are also a major security risk.
She then addressed the Liberal Senate leader, Attorney-General George Brandis:

"I'm quite happy to remove this, because this is not what should belong in this parliament," Senator Hanson said as ripples of liberal butthurt spread through the chamber. "Senator Brandis, in light of the national security of this nation, will you work with me to ban the burqua in Australia. There have been 13 foiled national threats against us with terrorism, three that have been successful, and Australians have lost their lives... I would like to ask on behalf of the Australian people, considering there has been a large majority of Australians wishing to see the banning of the burqa."

There are estimated to be about 500,000 Muslims in Australia, which has a population of 24 million.
The vast majority of Australians are in favour of banning the burqa. The reasons they give are fears of terrorism, cruelty to women, and the fact that it makes assimilation difficult or impossible.
These reasons are thought to be "acceptable." No doubt there are other reasons, like racial feeling and the common human desire not to see drastic demographic change and become a minority, but these views are considered less "acceptable" in the dominant culture because of Leftist control of the media, churches, and academia.
A recent poll showed that half of all Australians favour stopping Muslim immigration. As this view is less socially "acceptable" we can be sure that the real number supporting it is even higher.

If the constant, shrill Leftist guilt-tripping and brainwashing were removed, here too there would be a majority, not just for stopping migration from Muslim countries, but for reversing the flow. That is why brave politicians like Pauline Hanson are so important.
Scummy leftist politicians responded to this brilliant piece of political theater by going into moral signalling overdrive. Greens leader Richard di Natale whined:

"With a senator of this Parliament mocking a community of decent, hardworking, law-abiding citizens of this country there is no stronger example of why this Parliament needs a Parliamentary code of multicultural ethics than this."

Once again we see the Leftist intent to shut things down. If they can't brainwash they try to ban. Don't blame the Muslims. It is Leftist Whites who are the real cancer in any Western country. 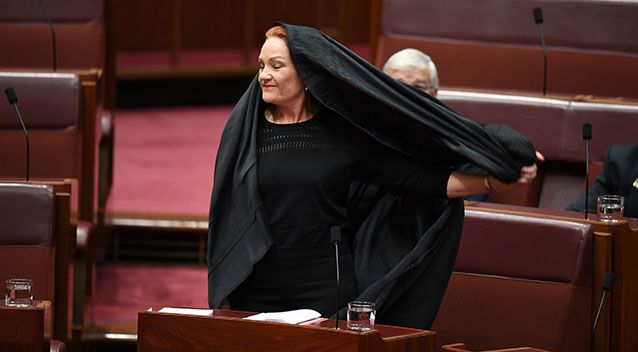