We are pleased to annouce that the MIWA swimming sessions for Muslims are due to start again in April 2012 at the Leyton Leisure Lagoon inshaAllaah. As before, one session will be for brothers only and the next for sisters only. We also have the gym again for those 16 and over.

The complete services include the swimming pool, jucuzzi and slide. Plus for those aged 16 years old and over there will also be the Steam room, Sauna Room and Gym!

Please see the leaflet and poster below for more information.

As part of a Waltham Forest council funded initiative, young residents (under 18) can swim for free at anytime (junior membership required). This offer is also extended to 60+ members who are entitled to free swimming at anytime during this council funded scheme.

FREE day pass
Download a FREE day pass today and discover the Better way of living.
Get your pass »

We’ve memberships available to suit everyone - from Pay & Play to Prepaid. Choose the one that’s right for you and become a member today!

We are proud to work in partnership with Waltham Forest Council

Australian kuffar woman told: only way you can go into this swimming pool wearing a dress, is if you convert to islam.

This is the application of sharia.  Non-muslims are now (unwittingly?) becoming the Ansar.  They are like the Kapos - jews in concentration camps who helped the Nazis.

Get short URL
The issue of having separate swimming hours for females is not something that should be racial or targeted at a particular faith group, argues Dilly Hussain from the British 5pillars Muslim news website.
TrendsEU refugee & migrant influx

Sweden's ideals of equality between the sexes, not to mention its ability to accommodate an increasingly multi-confessional population, are being put to the test after it was revealed that an increasing number of public swimming pools are due to have women-only hours.

The move was supposedly to accommodate the growing Muslim population as Europe's migrant crisis continues. However, a probe has reportedly been launched into whether such initiatives actually discriminate against men.

RT discussed this issue with two social advocates on different sides of the debate: Dilly Hussain from Britain’s 5pillars Muslim news website and Toni Bugle, a founder of 'Mothers against Radical Islam and Sharia'.

RT: Dilly Hussain, what is your response to this and to what extent do you think European countries should be changing their ways in order to accommodate immigrants? 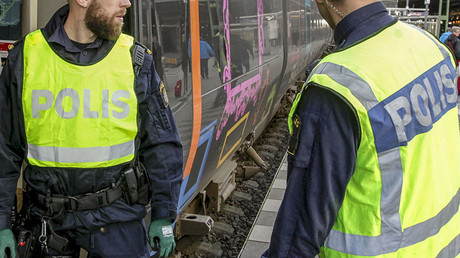 Dilly Hussain: I think the issue of having separate swimming hours for females is not something that should be racialized or targeted to a particular faith group. What you find is that comfort is something which is desirable by both sexes, so you find women and men of all faiths and none who may prefer to swim or do certain activities with their own sex. We shouldn’t pander to this kind of arbitrary subjective conception of gender equality.

RT: But isn’t the move towards segregation connected directly to religion?  Isn’t there a link to the fact that in certain countries it is a legal requirement that men and women go swimming separately?

DH: Yes, there is a legal requirement for Muslim-majority countries. If Europe wants to accommodate that, then that’s their choice. But if they don’t want to, that is also their choice. What they shouldn’t do is accommodate for it and then exacerbate public opinion against a particular faith group or migrants.

RT: Toni, what is your reaction?

Toni Bugle: I don’t think the public are exacerbating the problem at all – the problem has been exacerbated by the behavior of immigrants who have targeted children and women in such a way that it is now caused men to also become victims because they are seen as being just as bad or capable of committing these crimes. There should be no segregation…The majority of the crimes at the moment have been perpetrated, through no fault of mine or yours, but by immigrants. These immigrants have come from Islamic countries. And when it comes to segregation, I believe, the more segregation you have, the bigger the gap you are going to have, the bigger the divide you are going to have between communities. How do you then rectify the problems we’ve got within communities if we keep dividing them?

The statements, views and opinions expressed in this column are solely those of the author and do not necessarily represent those of RT.

Permalink Reply by Alan Lake on August 4, 2016 at 4:43
Fury as women are BANNED from 'men-only' sessions at Luton's taxpayer-funded Olympic swimming pool 'for cultural reasons' and segregated in smaller community baths
Men and women-only sessions will be held at the Inspire Sports Village
The move will give men exclusive access to larger 160ft, eight-lane pool
Meanwhile women will be relegated to the smaller 65ft community pool
Swimmer claims she was told the decision was down to 'cultural reasons'

"A community group in Marseille arranged the day, giving access only to women wearing the all-over swimming garment.
The group was set up to "encourage women to join in with the community"."

Yep, nothing like having a day when you kick the rest of the community out of a public area, for helping your self-defining gang to "Join with the community".

Get short URL
The mayor of a US city has apologized after officials forced a group of Muslim children out of a community pool by falsely claiming that their hijabs and niqabs did not meet safety standards.

Mayor Mike Purzycki of Wilmington in Delaware said staff had exercised “poor judgement” at the Foster Brown public pool earlier this month. The situation arose when the director of a summer Arabic enrichment program was approached by the pool manager, who cited a policy that supposedly prohibited swimmers from wearing cotton in public pools.

The manager said that the elementary-school-aged swimmers had to leave the pool because they were wearing cotton shirts, shorts, hijabs and headscarves. However, no such specific rule exists.

“There’s nothing posted that says you can’t swim in cotton,” Tahsiyn Ismaa’eel, owner and principal of the Darul-Amaanah Academy, told Delaware Online. “At the same time, there were other kids with cotton on. I asked, ‘Why are my kids being treated differently?’”

Ismaa’eel, who wears a hijab and niqab covering her face, was then approached by a police officer who told her the pool was over capacity. “I felt very unwanted,” she said.

Purzycki had initially refused to comment on the case but has now apologized, saying the city “should be held accountable” for what happened. “I apologize to the children who were directed to leave a city pool because of the religious-required clothing they were wearing,” he said in a statement.