Its policy decision has highlighted a split among the big food retailers over whether religious staff should be excused certain jobs.

In contrast to M&S, Sainsbury’s said it had issued official guidelines that stated there was no reason why staff who did not drink alcohol or eat pork for religious reasons could not handle the goods.

The advice followed consultations with religious groups, said a spokesman.

Tesco said it treated each case on its merits, but said it “made no sense” to employ staff on a till who refused to touch certain items for religious reasons.

Asda said it would not deploy Muslims on tills who objected to handling alcohol, while Morrisons, which is based in Bradford where there is a large Muslim community, said it had widespread experience of dealing with the issue and would “respect and work around anyone’s wishes not to handle specific products for religious or cultural reasons”.

At M&S, Muslim staff who do not wish to handle alcohol or pork have been told they can politely request that customers choose another till at which to pay.

At one of its stores in central London last week, customers waiting with goods that included pork or alcohol were told by a Muslim checkout worker to wait until another till became available. The assistant was extremely apologetic at having to ask customers to wait.

One customer, who declined to be named, said: “I had one bottle of champagne, and the lady, who was wearing a headscarf, was very apologetic but said she could not serve me. She told me to wait until another member of staff was available.

“I was taken aback. I was a bit surprised. I’ve never come across that before.”

Customers trying to buy alcoholic drinks for Christmas were also asked to wait.

An M&S spokesman said: “We recognise that some of our employees practise religions that restrict the food or drink they can handle, or that mean they cannot work at certain times.

“M&S promotes an environment free from discrimination and so, where specific requests are made, we will always make reasonable adjustments to accommodate them, whilst ensuring high levels of customer service.”

The policy applies throughout its 700-plus stores. The spokesman said the policy of tolerance applied to other religions, so, for example, Christians who did not want to work on Sundays and religious Jews who chose not to work on Saturdays would also be excused. “This is something we decide on a case-by-case basis,” the spokesman added.

Sainsbury’s policy is set out in a booklet called The Little Book of Faith, which was issued by its human-resources department.

A spokesman said: “We have guidelines in place that set out the requirements and beliefs of different religions, which we have previously discussed and agreed with religious organisations and community groups.

“We treat everyone fairly, so although our colleagues on tills or replenishing stock will be asked to handle alcohol and meat, we will always work closely with individuals to ensure we are inclusive and fair to all.”

Sainsbury’s guidance advises that all staff — regardless of religious beliefs — are able to handle meat and alcohol. In other words, the same rules apply to everyone, irrespective of religion.

“If a [religious] belief involves not eating or drinking something in particular, they can still handle the food or drink as part of their job,” said a Sainsbury’s source.

The supermarket added that it would consult on a “case-by-case basis” if need be.

Morrisons said it had been a long-standing, unwritten rule that Muslim staff could opt out of serving alcohol.

A Morrisons spokesman said: “We would respect and work around anyone’s wishes not to handle specific products for religious or cultural reasons, regardless of the time of year.”

A Tesco spokesman said: “We don’t have a specific policy and take a pragmatic approach if a colleague raises concerns about a job they have been asked to do.”

She added: “It would not make sense to have somebody on the till if they cannot handle certain items.”

Dr Michael Nazir-Ali, the former bishop of Rochester, who has voiced fears that Britain is losing its Christian identity and warned of the dangers of the influence of radical Islamic beliefs, said supermarket customers risked feeling uncomfortable if they were told they would have to wait to be served just because they were buying alcohol.

He said: “If supermarkets do not put up a notice saying this desk does not handle alcoholic beverages, it runs the risk shoppers could be humiliated when they get to the checkout.”

Shopworkers — Christian or not — have the right to refuse to work on Sundays, although Dr Nazir-Ali believes many choose not to exercise that right for fear of missing out on promotions or losing wages.

A report issued in 2005 by the Muslim Council for Britain and the former Department of Trade and Industry considers the example of a devout Muslim asked to work on the meat section of a supermarket.

The official guidance concludes: “If you feel that you cannot handle pork as a Muslim, then you should discuss this with your manager.

“A policy that all staff must work in the meat section of the supermarket may amount to indirect discrimination since it disadvantages Muslims.

“Your employer should try and accommodate your request where possible.”

If you took this back in time just 10 years, nobody would believe it could happen.  There is so much wrong and so much woolly thinking from the dumb Kaffir involved in this, that its hard to know where to start.  I'll just throw a few points out there.

If this was a youtube video from Drinking With Bob, at this point he'd just be fuming silently at the camera.

"Muslim staff working for Marks & Spencer have been given permission to refuse to serve customers buying alcohol or pork products."

That's incredible! I knew that Muslims refused to work on tills which dealt with alcohol and pork. But this is something different entirely. Here Muslim workers are allowed to "refuse to serve customers". This is not just a case of Muslims not working in suspect parts of kuffar businesses. This will create incredible complications, embrassment and, I hope, customer anger.

Come to think of it, it would never have worked that Muslim workers simply found tills or specific parts of supermarkets, etc. which didn't deal with alcohol and pork. All tills deal with alcohol. Therefore the only solution left was to allow Muslims to refuse to serve the filthy drunken kuffar. I really think this is a good thing because it will annoy so many people. And if it happens to me, I will create hell.

Muslims, as ever, are testing the water. Every victory for sharia law is inspiration for the next battle - which will be tomorrow. Who knows? Muslims who don't want to deal with goods which come from Israel? Hah! Too late - that's already happened! What about goods that come from the US (the "Crusader Invader" of Iraq, etc.)? What about companies which deal with Wonga or who sell pig products (even when the product itself is not pork)? The variations are endless.

This is just the latest battle in the war for complete sharia. Literally every day some new battle-for-sharia occurs.

Public Answer ? - Boycott M&S and any other sharia compliant business until they tell islamics to get stuffed ! 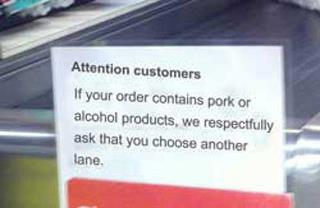 Complain to the manager, though he's already agreed to sharia tills. Best do that and also make a loud fuss. Question the Muslim. Say your time is being wasted when another server is found - which may take some time. Do anything to create a problem. After they've found a new server, go back into the supermarket, buy another can of beer and do exactly the same thing again - pick the same Muslim. And keep on doing it - if you have enough cash.

Fighting for sharia law is almost as important as sharia law itself to many Muslims. Through that fight, or 'struggle', Muslims discover their Muslim/Islamic identity. That's why some Muslims are still fighting for MORE sharia law in states like Iran and Afghanistan.... In other words, Muslim demands for this and that are not gonna stop any time soon. The fight for full sharia law in over 1400 years old and has created havoc, pain and suffering globally throughout those many centuries.

I spoke to my friend in the SWP this weekend.  Even he was appalled by Marks and Spencer's decision.  It looks like we have reached the line in the sand. 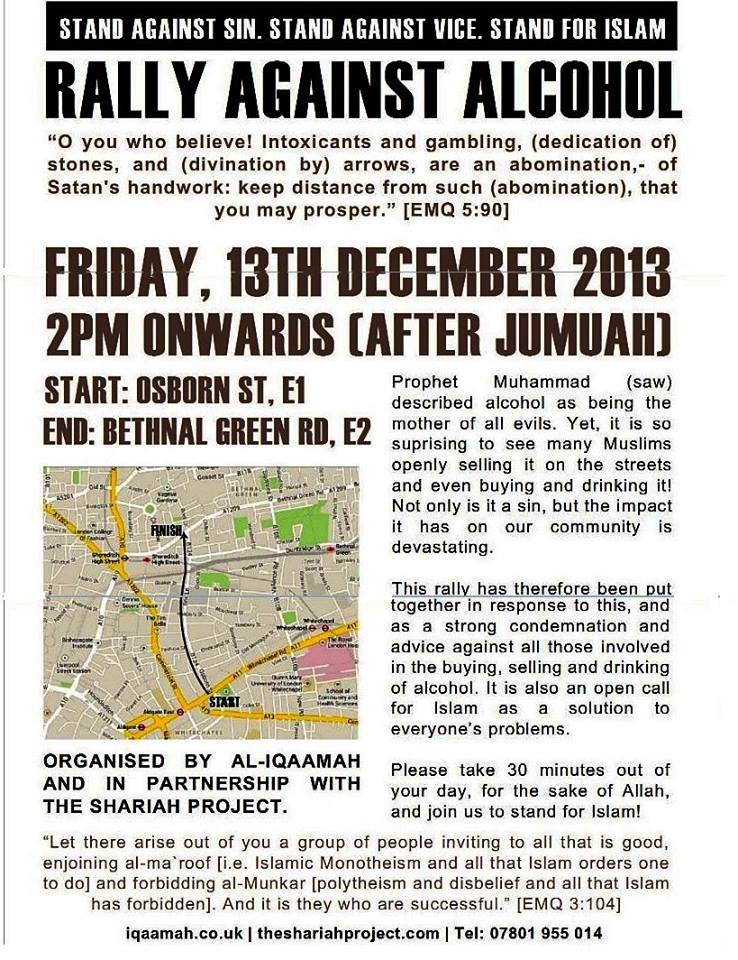 The Hamburg Muslims are letting the mask fall so far that critical tones are even starting be heard from one of the local SPD politicians:

The head of the SPD faction, Jürgen Heimath, admonishes quietly in the meantime: “One should wait before making a judgment, until the spaces have been either partly or completely filled.” Of the veil outfits being distributed on “Mumin Shop,” he says: “Offerings of this kind contradict the efforts of this society toward the integration of everyone.”

CDU faction head Ralf-Dieter Fischer states it similarly: “We are striving across party platforms for integration. We just don’t want to create these parallel and special societies.” And he says regarding the shopping center: “That is unambiguously a demarcation. Such a thing doesn’t belong coming to Hamburg.”

What does the Koran say?  "Do not take the jews and christians as your friends".  All the evidence shows that muslims are not interested in integration.  Their form of Kahanism is permitted though.  Those who object to jewish Kahanism, but not to muslim Kahanism, are prima facie jew-haters.

And here's the welcoming flag of jihad: