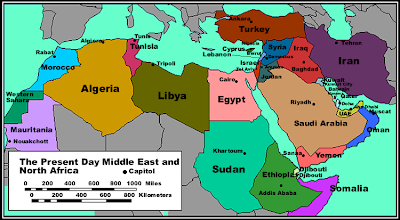 Secretary of State Hillary Clinton referred to the SNAFU of Benghazi as being the result of the "Fog of War". It was not. It is the result of the fog and smoke generated by Team Obama in an effort to distract from the real agenda that they were promoting in Libya.

Unless you have been living on a mountain top far from electricity and the internet, or totally asleep these last four years, you are well aware of the fact that Barrack Hussein Obama has a bad attitude with all the nations of the west, with the United States and Israel vying for the number one position on his hate list. The United States must be brought to her knees and Israel destroyed. Until then, Obama is a man with a mission.

Note in the above map, Egypt, dominated by the Muslim Brotherhood, in pink, with its eastern segment being the Sinai that borders Israel. Beneath that border are a multitude of tunnels through which countless weapons are transported into the Gaza Strip, right on on Israel's border. 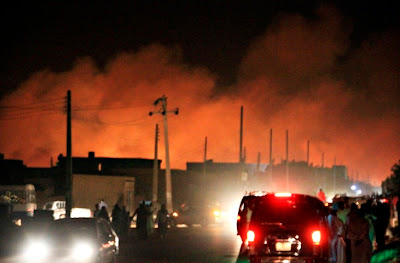 Again view the map, to the west of Egypt lies Libya, yet another stronghold of Islamic extremists and vast caches of sophisticated weapons that were provided by both the U.S. and Russia. To the south of Egypt, still another enemy of Israel, Sudan, where much of their population suffer hunger while their leaders grow rich in the arms business. The photo to the right will sorely damage some of their easy money. That image is of the continuing explosions of weapons and ammunition that were being produced in one of their weapons factories to sell the the "poverty stricken" people of Gaza. Just a calling card dropped off in the middle of the night by Israeli aircraft.

In recent essays I have put forth the premise that the most accepted idea about the death of Ambassador Stevens and his colleagues is incorrect, They were not allowed to die to conceal Barrack Obama's involvement in the arms trade with the rebels of Syria. Providing weapons for the overthrow of Assad was the realm of the Ambassador and the CIA. They were allowed to die to prevent those arms from reaching Syria. Their deaths opened a different path for those anti aircraft missiles and other weapons to be rerouted to Gaza and used against Israel.

Egypt is in a very unique position that allows a select few to garner great wealth under a totally immoral "religion". Vast amounts of weapons are being shipped into and through their country, and they have two options. Various checkpoints can either bribe those who are transporting arms to Gaza, or impound those weapons to be later used by the Egyptian government themselves. We never hear about those who pay the bribes and are allowed to proceed. Our working knowledge of the arms trade is what is announced by the Egyptian government when they seize those weapons.

You need not follow all of the links in the following group of headlines. The headlines alone are adequate to show the point that I am making.

www.bloomberg.com/news/2012-05-21/egypt-military-intercepts...
May 21, 2012 · Egyptian security forces intercepted 50 short-range surface-to-air missiles smuggled from Libya, the military said, in the latest such seizure of weapons

stopturkey.blogspot.com/2011/03/israel-intercepts-weapons-carrying...
Mar 20, 2011 · Israeli commandos intercepted a ship travelling from the port of Mersin in Turkey to Alexandria in Egypt. The ship contained weapons Israel believes were ...

www.bloomberg.com/news/2012-05-20/egypt-intercepts-shipment-of...
May 20, 2012 · Egyptian security forces seized a weapons cache that includes 191 rockets that were believed headed for Gaza, the Interior Ministry said. Three men were

The above listed links were the result of a Bing search that yielded 117,000 hits. The arms trade is alive and well and so much of it is headed for Gaza. The ultimate target is Israel.

We all hear the plaintiff cries of liberals about the poor hungry maligned people of the Gaza strip. A few months ago a "Flotilla" of relief ships tried to breach the Israeli blockade bearing "humanitarian aid".They were naturally intercepted and divirted by the Israeli Navy. Those onboard the flotilla never had any hopes of reaching Gaza. The whole thing was simply a publicity stunt to put Israel in a bad light of starving the poor Palestinians. I have a question. How can those starving people afford to spend so many million of dollars on weapons? No question is complete without an answer. I have it as well.

While everyone is focused on the Obama, Benghazi, and Syrian connection they are overlooking the one group that continually assaults Israel, causing that tiny nation to spend vast sums of money in their immediate defense while other Islamic nations build their military and prepare for what they feel will be the final attack on the homeland of the Jews.

Here are some of the sources of funding for Israel's continual threat.

www.israelnationalnews.com/News/News.aspx/130215
The US vows that its $900 million aid to the PA and Gaza will not reach Hamas, ... He noted that almost all of the foreign aid before the Oslo War was directed to ...
Excerpt:
"Prime Minister-designate Binyamin Netanyahu has warned foreign leaders not to invest in Gaza while Hamas still attacks Israeli targets with rockets and places bombs along the separation barrier, however. Secretary Clinton maintained that the aid will flow on the condition that none of it would reach Hamas despite a long history of Hamas putting its hands on foreign money, weapons and United Nations humanitarian aid."

This from National Review:

tank.nationalreview.com/post/?q=MzJiMDQ0YjY0MTJlMzUyOGYzODY3...
Yes, It's Hamas Aid, and It's $900M of Cognitive Dissonance [Steve Schippert] ... This is not a cry from this writer to end all foreign aid. Far from it.

The following was published after Hamas and Fatah joined forces.

Lawmakers Call for U.S. to Cut Off Aid to Palestinians After Hamas ...

The laws passed by our Congressional Body do not matter. Obama and his masters know the importance of Hamas in the destruction of Israel. Nothing is allowed to stand in the way of their plan.

www.timesofisrael.com/obama-lifts-freeze-on-192-million-aid-package...…
Funding serves 'security interests of the US,' says president. Congress blocked it after Abbas's bid for UN recognition of 'Palestine'

A back door method of our funding Hamas. When the PLO requested membership in the U.N. public opinion forced a veto. UNESCO granted them membership in that part of the U.N. and half the battle was won. The next stage:

US withdraws Unesco funding after it accepts Palestinian ...

www.telegraph.co.uk/.../US-withdraws-Unesco-funding...membership.html
The United States severed funding to Unesco, the UN's cultural arm, after it defied the White House by voting overwhelmingly to accept the Palestinian Authority as ...

Considering all of the funds that UNESCO  sends to the Gaza strip to build schools and conduct scientific research this created a problem for Hamas and so...

www.foxnews.com/.../four-months-after-de-funding-unesco-state...back
04/04/2012 · ... in hopes that Congress will grant a legal waiver allowing UNESCOfunding to be restored. ... Support for UNESCO is part of the Obama administration’s policy ...

In spite of opposition from Congress, Hillary Clinton invokes executive privilege and once again the money flows to finance terrorism...

www.outsidethebeltway.com/clinton-funds-palestinians-despite...
Secretary of State Hillary Rodham Clinton is allowing U.S. funds to flow to the West Bank and Gaza ... assistance” really is a de facto stipend to the likes of Hamas ...

In watching the efforts of Obama and Hillary Clinton an old phrase comes to mind: "There is more than one way to skin a cat', though for the life of me, I have never understood why anyone would want to skin a cat. It is obvious to any who dare look that our leaders are empowering our enemies as well as the enemies of Israel.

U.S. poised to forgive $1B in Egypt debt - UPI.com

www.upi.com/Top_News/US/2012/09/04/US-poised-to-forgive-1B-in...
The White House is near a deal to forgive $1 billion in Egyptian debt as part of a plan ... Barack Obama pledged up to $1 billion in debt relief for Egypt in a State

And add this to the equation...

Here is where the skinning of that poor cat comes in. If Obama and Hillary could, they would provide weapons straight to Hamas. Public opinion will not allow that and so the guise of "humanitarian aid" is advocated for the sake of the teary eyed. Cash is just as good as weapons as long as Obama can keep up the flow of said weapons. Thus far he has been doing a fine job. What's an ambassador or two?  ...

In the final push for Israel, the members of Hamas are expendable and will be rapidly expended, but the forces of Egypt, Libya, Sudan, Pakistan, Afghanistan, Turkey, and other will roll over their bodies. Meanwhile they are of utmost importance in the day to day harassment of Israel. One of Obama's most important objectives is that they remain a viable force in the unending attacks they inflict.

Post Script:
This essay is but the latest in a series on the Benghazi attack and the Hamas connection. All are contained in The Benghazi Conspiracy Compilation.